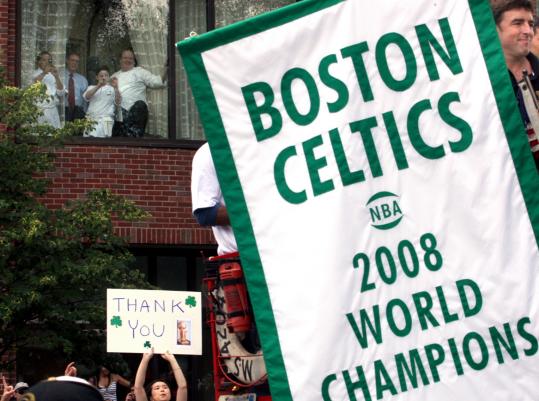 We thought it would be like asking which child you like best: Given the amount of sports success showered upon Boston in recent years, which team is most closely knitted into the fabric of the city?

But the choice proved easy.

In the sweet flood of nostalgia that swept the city yesterday in a sea of Green, every fifth hat, it seemed, belonged to the Red Sox.

Deep down, when the city looks in the mirror, Boston is still very much a baseball town, said Boston fans as they nonetheless gleefully thronged the Celtics victory parade. Even the guy who painted his hair green and put a clover over his naked chest didn't think this Celtic euphoria would last.

"I give this a week," said Jared Fahey, a 19-year-old college student from Attleboro. "Then, it's back to normal."

Translation: The Celtics are sports gods today, but Red Sox Nation is ready for summer.

In an informal survey of fan sentiment along the route, the Red Sox easily placed first as the team that most reflects Boston's soul. The Celtics took a distant second, and the Patriots ran a close thirdPerhaps surprisingly, given the city's reputation for grit and toughness, that hockey squad with the yellow-and-black team colors got nary a mention in conversations with nearly three dozen fans.

"Celtics fans don't like to admit it, but it's a baseball town," said Laura, a 47-year-old Dorchester resident who wouldn't give her last name because she was skipping work.

As she spoke - just minutes before the Duck Boats carrying Celtics legends arrived - a familiar, derogatory chant about the Yankees erupted. The chant remerged several minutes after the boats moved down, and several started tossing baseballs on the Boston Common.

"In one week this will all be gone," said John Comerford, a 44-year-old forklift operator from Abington, motioning at his Celtics shirt. "Next week is training camp for football. This will be all blue."

For the Celtics to recapture the heart of the city, spoiled fans say there needs to be more victories.

"Maybe a three-peat," said Alex Allen, a 28-year-old from Mattapan.

"It's gonna take more than one year of winning to turn it around," said Kevin Narey, a 21-year-old college student from Lynn who was wearing a Red Sox cap with his Celtics shirt. "You gotta give me two or three years before I jump on the bandwagon."

Hockey seemed to capture the city in the 1970s and basketball took over in the 1980s. In 1986, as Roger Clemens struck out 20 batters in one of his best games, only 13,414 showed up at Fenway Park, in large part because the Celtics were battling the Hawks in the playoffs.

Football has had a resurgence in recent years as hockey has been driven to the background.

"People are fickle," said Scott Dalrymple, a 45-year-old custodian from Dorchester. "But no matter what the Sox are doing, you gotta go. It's Fenway Park. The tradition. The Yankees."

The Celtics seem to have captured a younger fan base, in part through marketing campaigns led by the team ownership to attract more families to the games in years when the Celtics couldn't seem to buy a win.

"I'd pick the Celtics," said Alec Sanford, 12, of Framingham. "They're more exciting."

"Ballin's back in Beantown," said Graham Phelps, a 17-year-old from Durham, N.H. "Who's paying attention to the Red Sox now? It's Kevin Garnett's energy, it just transforms the city."

But perhaps you don't have to choose. You can wear your Red Sox hat with your Tedy Bruschi jersey and your Celtics wristband.

"Right now, we are all three," said Donald Watson, a 62-year-old Charlestown resident who portrays Ben Franklin and was wearing spectacles and knee-high green socks yesterday. "We are just waiting for the Bruins to catch up."