Infant shot while in father's arms

Gunfire at Mattapan building leaves baby fighting for her life 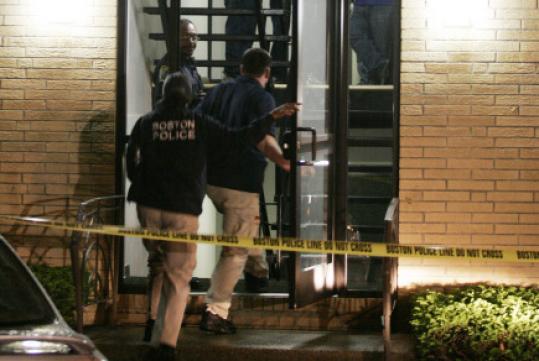 A baby girl was fighting for her life late last night after shots fired into a Mattapan apartment struck her while she was in the arms of her father, police said.

Police Superintendent-in-Chief Robert Dunford said last night that because the baby's injury was so serious, the shooting was being investigated by the department's homicide unit.

At about 8:30 p.m., someone outside the apartment building on Fairlawn Avenue fired multiple shots into the apartment, police said. One bullet pierced one of the man's hands and went into the baby's abdomen.

Both the man and the baby were rushed to Caritas Carney Hospital, and were transferred to Boston Medical Center, where the baby was undergoing surgery late last night. A BMC spokeswoman would give no details on the condition of the baby or the father.

Although police did not release the identity of the victims last night, a family member identified the man as Alinson Peguero, 46, and the baby as his daughter Alianna.

A police official also said last night that detectives were investigating the possibility that the shooting was gang-related.

It was the second time the family has been hit by violence in the past year. Alinson Peguero's 20-year-old son, Alan, was shot to death on Sept. 4 while working at the family's convenience store in Dorchester. The birth of Alianna in February was helping the family deal with their grief, although they have been frustrated with the slowness in solving the case.

"Oh, my God, not again," said Indira Castillo, 27, of Roxbury, a former stepdaughter to Alinson Peguero and a half-sister to Alan. "It's only been nine months since we went through this. We still have an open wound from my brother's death."

Castillo said Alinson Peguero was sitting on the couch watching television when the shooting erupted. She said several assailants climbed on a small balcony of the building and fired through a screen door.

She said Peguero ran from the couch with the baby in his arm when he was struck by one of the bullets.

She said she believes the shooting was related to her brother's slaying. Police said the convenience store shooting was not random.

Elaine Driscoll, a police spokeswoman, said about last night's shooting, "The preliminary investigation indicates this incident was not random."

Dunford, speaking from the shooting scene, had little information to release.

"All I can tell you is this is early in our investigation," Dunford said.

Police blocked off access to the building last night, while investigators could be seen looking for evidence in a stairwell. The building is located in an apartment complex.

Camille Williams, 27, who lives across the parking lot from the shooting scene, was in her apartment with her sister and niece when she heard three gunshots.

"It was scary," Williams said, as she stood on her building doorstep last night while a steady rain pelted her umbrella. "The gunshots sounded so close it echoed through the parking lot."

Castillo said that her former stepfather had remarried and that the baby girl was the only child of the mother's.