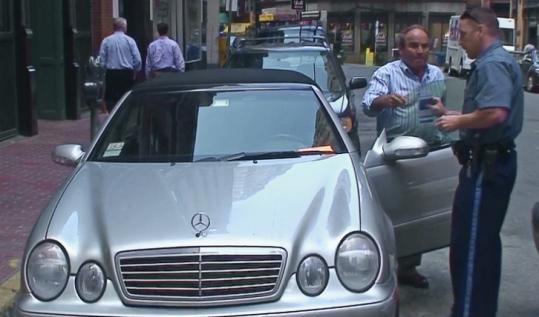 He lives in one of Wellesley's most exclusive neighborhoods, owns a $1.8 million Nantucket vacation home, and has a small fleet of luxury cars at his disposal. But when Gerald Hamelburg drives downtown, he doesn't like to pay his way, according to investigators with the state inspector general's office.

The Boston lawyer, they say, uses his deceased mother's handicapped placard to park his Mercedes convertible, free of charge, at meters near the High Street firm that bears his name.

"It's a particularly obnoxious example of abuse. You use a fake placard to park in any space you want anytime you want to? It's absurd. It's horrible," said Inspector General Gregory Sullivan, whose office pursued Hamelburg for nearly two years as part of an investigation into the misuse of the placards.

The investigation, which also involved the Registry of Motor Vehicles and State Police, turned up hundreds of placards that were being used by people who were not disabled and that had been originally issued to someone else.

Hamelburg, who has two Mercedes vehicles, a Lexus, a BMW, and a Jeep registered at his address, was a target of the original probe, but kept eluding investigators, the inspector general's office said. Investigators observed him illegally using the placard about six times, but he was able to move the car before State Police arrived to ticket him, the office said.

This week, however, investigators cornered him. They said they found his silver Mercedes - with the Basketball Hall of Fame license plate BB 712 - parked at Franklin and Batterymarch streets. He was called out of his office and ordered to give up the placard. He was also given a $25 ticket for the unpaid meter and a $500 citation for allegedly misusing the placard, and was ordered to a hearing where he faces a 30-day license suspension.

According to an investigator's report, Hamelburg seemed unclear about what he had done wrong.

"He denied that he was 'displaying' the placard," wrote the investigator, who videotaped this week's exchange, "and stated that it was merely 'hanging there.' He questioned why he was being sanctioned for the use this time, saying that he had used it 'half a dozen times' before that and 'no one' had ever had an issue with his use of the placard before. [The trooper] asked him why he believed that was an appropriate defense to his having committed a serious violation by using the placard illegally. Hamelburg had no response to his question."

The initial investigation, whose results were released last summer, took place over two years and targeted three busy commercial districts where parking is at a premium: North Station, Newbury Street, and the Financial District. Investigators found that nearly a third of the 965 placards they saw in vehicles were being used by people who didn't need them and had been issued to someone else.

Among the worst violators were a state lawyer and his wife; the owner of a Newbury Street spa; and a Brockton woman who said she got the permit from her mother, who had gotten it from her now-deceased mother. Seventeen violators were forced to surrender the placards and given a $500 ticket and a 30-day license suspension.

After state officials vowed to crack down on the abuse, the Registry began cross-checking with Social Security to ensure that placards are taken out of circulation when a driver dies. The Patrick administration also filed a bill making it a felony, punishable by up to five years in prison, to use a counterfeit or altered placard. That bill was given initial approval Thursday by the House.

In addition, the Registry devised an online complaint form to give the public a chance to report offenders.

"The RMV is encouraged, but not surprised, by the increased interest we've seen in stopping placard abuse since last summer's investigation," said Registrar Rachel Kaprielian. "It really struck a nerve with the general public to see so many able-bodied people taking parking and access away from those who really need it the most, and local communities seem to be responding with stepped-up enforcement."

Since last year, the Registry has acted on 109 complaints, said RMV spokeswoman Ann Dufresne. In addition, she said, drivers have been found guilty of handicapped placard abuse 207 times.

Among the municipalities that have reported increased ticketing, Dufresne said, are Waltham - which has hired a paid police detail to catch violators - Westfield, Boston, Dartmouth, Lexington, Wrentham, and Scituate. Cities and towns are allowed to keep all parking fines and half of any revenue from citations.

In Waltham, the city took in fines that far exceeded the cost of the details. Since last summer, the city has collected $124,000 in parking tickets and $77,000 in citations. The city's handicapped commission gave $50,000 of the revenue to a local school for a playground, according to Jerry Leblanc, access analyst for the city's Handicapped Services Commission.

"We're netting $2,500 or $3,000 a week," he said. "I keep asking myself why other cities and towns aren't doing the same thing. I wish you wouldn't have to, but when people are saying it's their dead grandmother's or mother's or father's, or dead this and that, that's a problem."