THIS STORY HAS BEEN FORMATTED FOR EASY PRINTING
FRANKLIN 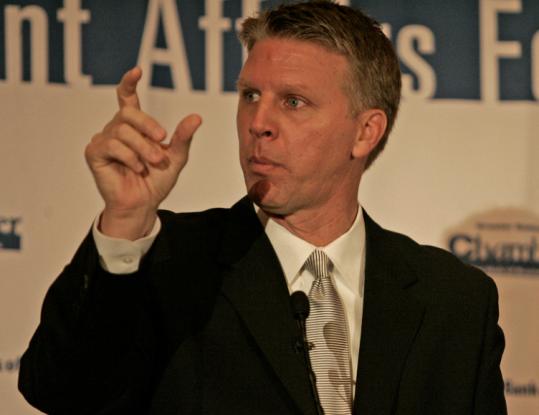 The new high school in Franklin will not be a Taj Mahal project, if town officials can help it.

Mindful of the examples set by Newton and Wellesley, both criticized by a top state official for approving expensive high school projects, officials in Franklin are working with the state to find a less costly plan for updating the town's 37-year-old high school.

Days before a vote Tuesday on a proposed $2.8 million override of Proposition 2 1/2, meant to raise property taxes enough to prevent the loss of more than 40 teaching positions, officials also said they do not believe that taxpayers would foot the bill for a $100 million renovation of the high school or a new facility costing $130 million.

Those two options were put on the table by an architect earlier this year.

"I don't believe this community could afford that, or would be willing to spend that kind of money," said Town Council chairman Chris Feeley.

Cahill, who serves as chairman of the Massachusetts School Building Authority, the agency responsible for disbursing state funds for school building projects, earlier this year said the state's job is "not to build Taj Mahals."

"I think [Cahill] hit the nail on the head that these projects have to be more manageable and palatable for both the local and the state budgets," said School Committee chairman Jeffrey Roy. "That was one thing that struck me about the size and scope of the Franklin High project. It just seemed to be a bit beyond what our community could afford."

Roy indicated that tight local finances were also a factor. Tuesday's override would pay for current costs, not the proposed school project.

"It's unrealistic to expect that we're going to be able to do a $100 million project in the next few years," he said. "I think we have a better chance of getting state aid if we scale it back. . . . If that means breaking the project up into smaller projects to make it more palatable, then so be it."

Franklin High School was placed on warning status by the New England Association of Schools and Colleges in February, due in part to concerns about handicapped accessibility.

The School Committee applied for the state's reimbursement program last year, but the town's request was not among the first 83 projects announced last November as leading candidates to receive some of the $2.5 billion in state funding that will be handed out over the next five years.

Katherine Craven, executive director of the MSBA, said that she has met with Franklin officials in the past couple of weeks to discuss scaling back the project.

"From my perspective, Franklin's plans need to dovetail with ours," Craven said. "The town is now more interested in repairing the building or adding classrooms for a more modest project."

Franklin officials have said that the new school is being designed to serve 1,900 students by 2016. However, the MSBA intends to work with the town later this month on clarifying those projections.

"They put those numbers out there before, but we hadn't accepted them yet," Craven said. "We haven't determined their level of need. That will drive the size, scope, and scale of whatever fix we may put into that building."

Feeley is looking to appoint a school building committee by early next month.

The committee, he said, "will look at the high school options, and any other school building that may need repairs or general maintenance, so that we'll have an idea where we stand with all the schools in town and come up with a plan to best deal with all of the repairs."