Revving up for reggae 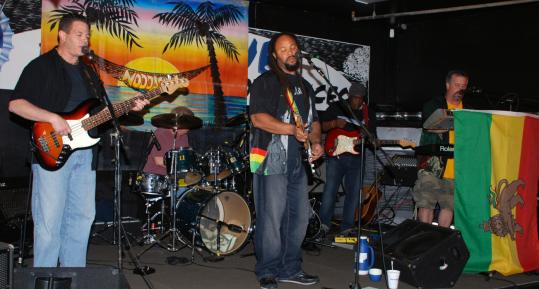 On a recent Saturday night, the dance floor crowd at Basta Bar and Grill in Weymouth was a cultural and generational mosaic.

Blacks and whites were represented in roughly equal numbers. People of all ages, from 20-somethings who looked barely old enough to get in the door, to silver-headed revelers who might have been their grandparents, grooved to the music. Styles ranged from preppy to punk to beachy to hippie to Rasta.

The reason for the diversity was the band, a pretty diverse outfit itself. Noddaclu, the area's most celebrated reggae band, includes one member originally from Ghana, one a native of the Caribbean island of St. Vincent, and three white guys (all natives of the South Shore).

The band was formed in 1992 by former rocker Kevin Morris of Hull, who - on the first of many trips to Jamaica - got hooked on reggae, then persuaded some musician friends that that if they played it, fans would come.

And they did. Noddaclu (they chose the name because most members had "not a clue" about reggae when they started) has played clubs, ski resorts, and music festivals for the past 16 years. They also play private parties, including a birthday bash for actress Sharon Stone on Martha's Vineyard in 1995. ("She loved us," Morris said.)

But Noddaclu is more than just a party band. Music critic Steve Morse, formerly of The Boston Globe, has followed the band for years and calls them "extremely talented."

"Every show demonstrates roots-reggae at its finest," Morse said in an interview. "The dedication that Noddaclu has shown in keeping reggae alive on the South Shore is simply incredible."

The band, he said, "would be a much bigger national presence if there was justice in the crazy world of music. But, as is, we get to enjoy them on a regional level - and they never disappoint."

Morris contends that if it weren't for Noddaclu, scores of people on the South Shore wouldn't know reggae music. "We've heard from so many people who had never listened to this kind of music before they came to one of our shows," he said. "Now they have racks of reggae CDs in their houses."

Reggae, which originated in Jamaica and was popularized around the world by the late Bob Marley, is influenced by African and Caribbean music styles, as well as American rhythm and blues. Its lyrics often focus on fighting oppression, praising God, and promoting harmony.

Morris has invested time and effort in growing the band's audience. When reggae hero Jimmy Cliff played the South Shore Music Circus in Cohasset in 1995, Morris persuaded promoters to let Noddaclu open the show by buying 300 tickets himself, then selling them to fans. The concert was a sold-out success.

Over the years, Noddaclu members have come and gone and shifted roles within the band. Besides Morris, a website designer who sings and plays keyboards, the current lineup is lead singer Tony Davies of Weymouth (a security guard at the Christian Science Center in Boston); drummer Alan Waters of Marshfield (an anthropology professor at UMass-Boston); bass player Tom Guerriero (a network engineer from Marlborough); and Verden Matthias (a mechanic from Dorchester).

The band plays familiar reggae tunes, mainstream hits, and originals from the band's two self-produced CDs - the just-released "Long Time Now" and "The Ultimate Backyard Reggae Party," which sold 2,000 copies upon its release in 1995.

"Going to see them is like going to a party," said Julie Doherty of Hull, 32, who's followed the band since high school and who attended the Basta show with her sister and a group of friends. "It's always a really good time."

Bea D'Angelo, owner of the Red Parrot in Hull, where Noddaclu will play the fifth annual Summer Kickoff Party this Saturday, agreed. "Somehow everyone in the crowd is always happy," she said. "It's a feel-good experience, a nice thing to be part of."

The band has made a particular impact on Vinny Capellupo of Scituate, 18, who has a form of autism. A longtime music fan, he discovered reggae about five years ago through his parents, who were Noddaclu fans.

When Morris heard then 13-year-old Vinny sing Marley's "Redemption Song" at a school talent show, he made him an honorary member of Noddaclu. Since then, the dreadlocked Vinny joins the band onstage five or six times a year (he opened the second set at Basta), which usually means requesting permission from club owners because of his age.

"It's been such a wonderful thing," his father said. "It's helped develop him into who he is. Reggae music preaches love and kindness and family, and it's helped Vinny have that kind of perspective on life."

Capellupo, who's just finished his first year in college and has taken up drums and bass guitar, loves it when strangers approach him to ask "if he's that guy who sings with Noddaclu," his father said.

Morris, who said that the band often calls upon "Jah Vinny" and his encyclopedic mind when searching for song lyrics, isn't surprised that reggae music has had such a positive effect on the young musician.

"At some point in life," he said, "reggae is going to touch everyone."