What I'd rather read

You would have to put a gun to my head to make me buy Scott McClellan's book.

Actually, you'd have to put a gun to my head and pull the trigger. And if you did that, I'd be dead, which pretty much describes the way Mr. McClellan's former employers at the White House view him now.

As for the debate whether the former White House press secretary's tome amounts to an act of crass opportunism or breathtaking if belated honesty, you can put me in the former camp. McClellan's inside account of the misguided and cynical effort by the Bush administration to drag a nation into war is about as revelatory as a book telling us that Barry Bonds took steroids.

I'd be a little more impressed with McClellan if, say, a few years ago, he had stopped midsentence, as he shoveled all that dookie from the podium with the neat White House seal in the middle, and said: "I'm sorry. I can't keep lying to the American people. We screwed up."

And if McClellan had donated the profits of his book to help soldiers, sailors, airmen, and Marines suffering from traumatic brain injury, then maybe I'd be inclined to give him the benefit of the doubt, and maybe even read his book.

The book I'd like to see written is by a young man with a little more courage and a lot more character than Scott McClellan. His name is Michael Baumgartner, and he has spent the past 13 months in Iraq, trying to clean up a mess created by others.

Baumgartner is 32 years old. When he arrived in Iraq last year, it was the 68th country he had set foot in. He worked as an independent adviser to US Ambassador Ryan Crocker, as deputy director of economics in the Office of Joint Strategic Planning and Assessment. That's a fancy title that means he tried to help Iraqis put their country back together again.

I met him last year in Cambridge, in the Senior Common Room in Adams House at Harvard, where he got his master's in international development from the Kennedy School. His view of what needs to be done in Iraq was jarringly clear-minded and forward-thinking, removed from the never-ending discussion of how we got into this mess.

"It's 2008, not 2003," he told me yesterday from Tel Aviv, where he was attending a wedding. "Refighting the 2003 political battles does little to address the essential questions surrounding how we now get Iraq far enough down the path to stability so that we can withdraw. The 2003 issues are largely a distraction and have little to do with what our all-volunteer military and civilian force is doing to try and bring the Iraqi people peace.

"When my convoy took an IED last week in Sadr City, we were on our way to help the Iraqi government get clean drinking water and food aid to its citizens. Evidence about WMDs and Dick Cheney once being the CEO of had nothing to do with it."

We hear regularly about how much we've wrecked in Iraq. Over the past year, Baumgartner has provided a perspective I couldn't get elsewhere. He told of a little boy nearly killed by an Al Qaeda bomb and how his friends pulled strings to get the kid to a US military hospital. Baumgartner was there when the boy hobbled back to give presents to the doctors and nurses who saved his life.

"Watching him cry as he handed out the presents and repeated a broken 'Thank you, America,' was one of the most amazing experiences of a very amazing year," Baumgartner said.

Baumgartner is more optimistic today than he was a year ago.

"I know a lot of people are still talking about how we got into Iraq," he said. "But how we get out is so much more important."

There is a story to tell, but I'd rather read the narrative of Michael Baumgartner, an architect of hope, not the likes of Scott McClellan, one of the authors of disaster. 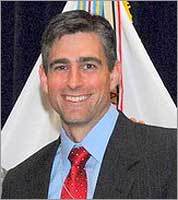 Baumgartner, the "architect of hope," would be the better person to write a book on Iraq. (Michael Baumgartner)