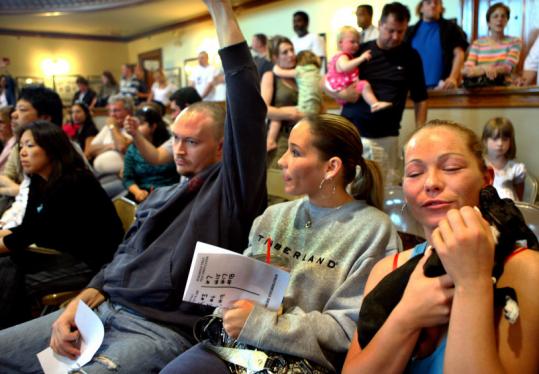 PEABODY - A roaring four-alarm fire that tore through a Peabody apartment complex Thursday, leaving 40 people homeless and displacing hundreds of others, is being blamed on a carelessly discarded cigarette butt.

Fire Chief Steve Pasdon said last night that a joint investigation by city and state officials "determined the cause of the fire to be the careless disposal of smoking material in the mulch, a cigarette butt." He called the blaze an accident.

Pasdon said the fire ignited in the mulch next to Building 8 of the Highlands at Dearborn apartment complex near Route 1. It then traveled up the side of the building and apparently hit a natural gas line, intensifying the blaze. Building 8 was destroyed.

Yesterday, residents who lost their homes struggled to deal with the aftermath of Thursday's inferno, which caused millions of dollars in damage.

Tears welled behind Gayle Gardner's glasses as she talked about the mementos lost, especially the marriage quilt that her 97-year-old grandmother had made for her. The quilt's light blue border and green, beige, lavender, and yellow pattern made the hand-knotted blanket look "like spring."

Then there are the five rugs - one made out of Gardner's old blue jeans - created on her great-grandmother's loom.

And finally, the lifetime's worth of family letters, postcards, and pictures Gardner, 37, had stored in two huge plastic bins. In one letter, Gardner's deceased great-grandmother had compiled a list of all the things invented since the older woman's birth.

All are gone now, turned to ash by the wind-whipped fire that consumed Gardner's 36-unit building.

"I was like the family historian," the now-homeless Gardner said yesterday as she waited at City Hall with her neighbors to find out what kind of aid they could get. "There's so many things . . . it's awful."

Hundreds of residents - an estimated 750 were displaced when their entire 18-building apartment complex was evacuated - had gathered at City Hall to learn when they might be allowed to go home. Many weathered the night before with family and friends or in a hotel; less than a dozen stayed at a shelter set up at Salem State College.

"Many of you will be able to get back into your units this afternoon," Spencer Welton, an official for Simpson Housing, a branch of the company that manages the Highlands at Dearborn complex, told the crowd.

Residents were asked to call a hot line at 978-535-3994 to check the status of their buildings, which fire and health and safety officials were inspecting for smoke and other damage. Meanwhile, the 43 residents from Building 8 will have to find new lodgings.

At the heated afternoon meeting, many questioned the safety of returning home, while others asked how to locate missing pets.

City Building Commissioner Kevin Goggin urged residents to push legislators to pass reforms that would tighten requirements on sprinkler systems and fire alarms in residential buildings, which are being formulated in the Legislature. Building 8 had a partial sprinkler system, although that system met state code.

The fire broke out just before 4 p.m. Thursday and firefighters battled shifting winds, water pressure problems, and a dry-heat index as they struggled to extinguish the flames and keep ash from igniting in the landscaping mulch. Utilities had to be shut off at the apartment complex, and Pasdon said it took firefighters some time to identify all the gas valves that needed to be dealt with. He said he did not think, however, that the time spent added to the fire's overall intensity.

Rebecca Sargent was at home with her baby son when she realized her apartment building was on fire. "I thought someone was barbecuing and I opened the balcony door and smoke started coming in and all the fire alarms went off," the 34-year-old recalled yesterday. "I'm totally overwhelmed. We just moved in there two weeks ago and we had baby showers and new baby furniture and clothing. It's gone - all the baby pictures."