Old morgue finds new life as a clinic for homeless 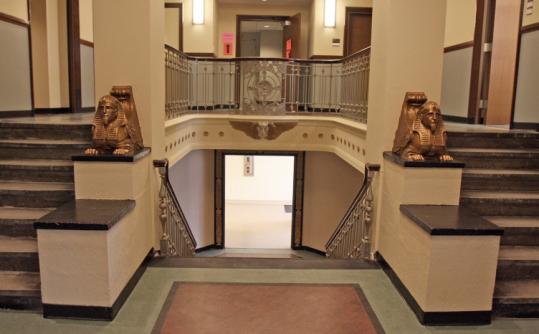 The rebirth of the old city morgue has its roots in summer 1979, when a Harvard medical student named Jim O'Connell was almost knocked off his feet by the stinging odor of formaldehyde.

The grim four-story brick building, oddly nicknamed the Southern Mortuary, had served as the final stop for the poor, tragic, and forlorn since the 1930s. O'Connell entered through the rat-infested tunnel beneath Albany Street, pushing a deceased gunshot victim on a gurney from the trauma center at what was then Boston City Hospital. He found it eerie that working with death had become routine for technicians toiling in a room lined with sliding storage drawers stacked four high.

Dr. O'Connell stood this week in that same room, the refrigerated storage drawers long gone, the sting of formaldehyde replaced by smells of fresh paint, new carpet, and office furniture still wrapped in plastic. Overcoming his squeamishness that day in 1979 was one of his greatest challenges in becoming a doctor. Now after a $42 million renovation, that old morgue has come full circle and been given a second life as the home of O'Connell's practice - Boston Health Care for the Homeless Program.

The agency, which serves 10,000 people annually, has long had its core services scattered in different locations. The city offered to lease the 77,000 square-foot building that housed the former morgue for a $1 a year and donors helped transform the site into a sleek facility with 104 inpatient beds, a primary-care clinic with 14 exam rooms, and a five-chair dental service.

"In a funny way, we are here because death is a constant companion of the people we serve," said O'Connell, the agency's president. "If you work with the homeless, death is ever-present. Mortality rates are extraordinarily high."

But before the staff started moving into their offices yesterday, they wanted to make peace with the building's past. This was where bodies were trucked after mass catastrophes such as the 1942 Cocoanut Grove fire that killed 492. And it warehoused tragic figures such as Edward Arthur Reedy, a penniless veteran who despite earning battle stars in World War II lay in the morgue for three months in 1982 after Congress wiped out burial allowances.

"There were some heebie-jeebies about moving into the space that had been the city morgue," said Robbie Gamble, 48, a nurse practitioner who works in the homeless program's family division.

To honor the dead and look forward, about 50 staff members met last week in the building for a nondenominational prayer service. There were reflections about the past, songs looking to the future, and symbols to represent air (a feather), water (a pitcher), fire (a candle), and earth (a potted plant).

Gamble read from a poem he wrote: "To all of you who passed through here: You who were known and loved and grieved . . . We want you to know that we will build on your foundation with our own stories of healing and pain, joy and tears."

The foundation was laid in 1929, when work started on the building, which was constructed with an Egyptian-revival theme popularized by the recent discovery of King Tut's tomb, O'Connell said. This style was most evident in the ornate marble lobby off Massachusetts Avenue, the only section of the morgue preserved by the building's new tenant.

The lobby is a Works Progress Administration project rich with symbols of life and death. Two sphinxes guard the stairs that once led down to the refrigerated storage drawers, standing sentry over the dead as if the morgue were a pharaoh's tomb. An hourglass was sculpted in the arch of the main door to represent the temporal limits of life. And families leaving the morgue passed beneath the busts of two women that were supposed to bid them a good voyage like the figureheads carved on a ship.

"It was built to honor the dead and comfort the families coming to identify them," O'Connell said.

The upper floors included the Mallory Institute of Pathology, a famous research facility where great medical discoveries were made about liver disease and alcoholism. At its height in the 1980s, the morgue was the site of most state medical examinations, an estimated 3,500 autopsies a year, according to newspaper stories at the time.

Over the years it fell into disrepair. Edward Principe, a retired State Police sergeant, described it as a dark, rambling labyrinth with antiquated equipment when he spent time there in the early 1990s investigating homicides for the Suffolk district attorney's office. "Every time I left, I wished I could go straight home and change my clothes," Principe said in a phone interview last week.

That dank atmosphere has been replaced by bright lights and new floors. The waiting room for the outpatient clinic has potted plants and a large flat-screen television. Sunlight beams into a glass atrium on the third-floor.

O'Connell stood in the gleaming clinic and looked at a red dental chair still covered in plastic.

"This is beyond our wildest dreams," he said.