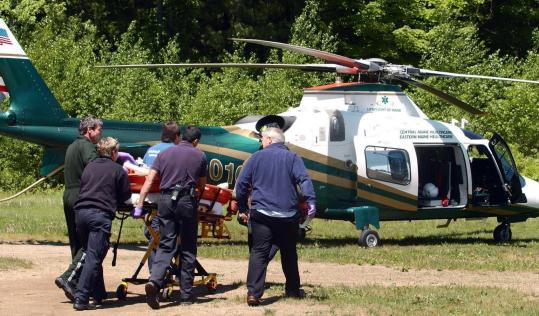 One of the victims was loaded yesterday on a LifeFlight of Maine helicopter. (MIKE ROSS/AP PHOTO)
Email|Print|Single Page| Text size – + By Associated Press / May 29, 2008

The girls were lying on beach towels on the trestle over Three Mill Pond when the train rounded a corner and began braking and blasting its horn shortly before 11 a.m., said Lieutenant Gary Fecteau of the York County Sheriff's Department.

The conductor and engineer say they never saw the girls move, but their injuries suggest they tried to scramble away at the last moment, Fecteau said.

Destiny Phaneuf, 13, of Lebanon lost her leg just below the knee; Rachel Brown 14, also of Lebanon, lost a foot, Fecteau said. Both were airlifted to Maine Medical Center in Portland.

The girls were cutting class and enjoying the sunny weather when the freight train came upon them, Fecteau said. There was no indication that the girls were impaired by alcohol or drugs or that their hearing was impaired by headphones, he said.

Phaneuf was unconscious when authorities arrived; Brown told police that the pair had fallen asleep while sunbathing, he said.

The train crew called to report the accident when it happened. Police and rescue workers from Milton, N.H., were first on the scene. They turned the investigation over to York County authorities after determining that the accident happened in Maine.