Sharing in dividends of local harvests 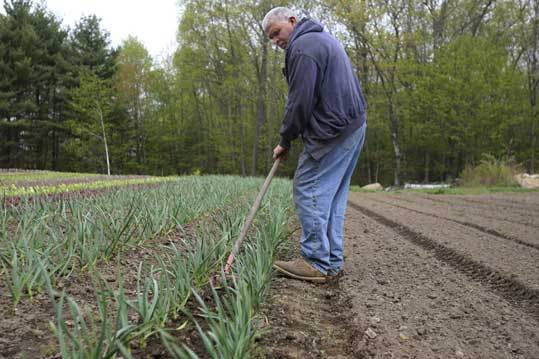 Mimi Englander relishes the chance to eat locally grown vegetables that are free of harmful chemicals. So the Littleton resident was thrilled when she found she could order a year's worth of them while helping support a local farm.

Englander participates in a program offered by Bear Hill Farm in Tyngsborough, through which customers who buy a "share" of the harvest at the start of the growing season receive a weekly supply of the farm's freshly picked produce, all grown without pesticides.

"Eating organic as much as possible is very important to me," said Englander. And purchasing from a farm just miles from her house allows her to reduce her "carbon footprint," she added, noting the use of fuel to transport food to a supermarket.

Bear Hill, whose 30 crops include corn and garlic, is among a growing number of farms to offer so-called community supported agriculture programs that allow customers to buy harvest shares. Across the country, there are more than 1,000 such programs, according to the University of Massachusetts at Amherst Extension website.

At least seven programs are operating in this region, according to recent interviews with farmers. In addition to Bear Hill, they are Kirk Farm in Groton; Belmont CSA in Belmont; Busa Farm in Lexington; Souhegan Soccer Farm CSA in Amherst, N.H.; Holland Farm in Milford, N.H.; and Picadilly Farm, which is in Winchester, N.H., but this season is introducing a program serving Arlington, Bedford, and Belmont in this area.

"I think it's really a growing thing. They're becoming very popular," said Mike Gagnon, who with his wife, Anne, owns Bear Hill Farm. Bear Hill, which also leases fields in Littleton and Westford, was one of the first farms in this part of the state to offer a community supported agriculture program.

Gagnon said his program grew from 16 participants its first year, in 1998, to 200 last year. This season, the Gagnons are capping the number at 150 to keep it more manageable, he said.

"I think people are getting a lot smarter about the importance of a strong regional food system and about healthy food. They're getting smarter about living in ways that are environmentally friendly and the positive consequences of that," said Anderson, who grows her vegetables on a 1-acre garden on Glenn Road.

At Bear Hill Farm, for $520, participants get produce once a week from mid-June to mid-October. Customers show up at the farm on one of three weekly pickup days, selecting vegetables based on a list written on a chalk board.

"It's really a big part of my life," said Anna Barker of Groton, who has participated in the Bear Hill program since its inception. She said the appeal for her is not only the chance to buy wholesome food and help the environment, but also "the sense of community" that she finds among participants in the program.

Stopping by the farm each week to pick up vegetables, "you get to know people," said Barker, who contributes a regular feature to the Bear Hill Farm program's newsletter, offering tips on preparing vegetables. "And meeting your farmer face to face is a good thing."

"We like it because it gives us an income in the beginning of the spring to be able to get the seeds, organic fertilizer, potting soil, and other necessary items," said Deborah Kirk, who with her husband, George, owns Kirk Farm.

"It really helps me sleep at night," said Jenny Wooster, who runs the Picadilly Farm with her husband, Bruce. Before starting their New Hampshire farm two years ago, both worked at other community supported agriculture programs, including managing the program at the Trustees of Reservations' Appleton Farms in Ipswich. "I don't have to worry if we have three rainy weekends and I don't sell my crops at the farmers market or farm stand. It's economic security for me."

Gagnon said community supported agriculture also "keeps you on the farm more. When you are selling at a farmers market, you are away from the farm all day. It really cuts into your time as far as being able to grow produce" and adds to fuel and labor costs.

And "you get to know your customers well," he said. "It's a community thing."

Dennis Busa, who owns Busa Farm with his brother and sister, said community supported agriculture "exposes us to newer customers" and provides needed revenue in the winter months, when business at year-round farm stands lags.

While they share a basic approach, programs vary in their practices. While many avoid all use of pesticides, some use it sparingly. Some assemble baskets of produce for their shareholders each week, while others allow participants to pick from a weekly list. Busa Farm distributes coupons shareholders use to purchase foods at discount from its stand.

And, in some cases, programs require participants to put in a few hours of work at the farm.

At Souhegan Soccer Farm CSA, for example, shares are sold at three price tiers, and those who buy at either of the lower two price levels work a set number of hours per month, helping with weeding, harvesting, and other tasks, according to farm owner Ben Brewster, a former soccer coach at Boston College and professional soccer player.

Brewster said the work tends to build community spirit and to give participants a meaningful connection to the land.

"Some families say their kids ate a whole plate of spinach for the first time because they picked it," said Brewster, who says that, like athletics, farming is good exercise. He combines the two activities at his farm, which also has fields for soccer and other sports.

"Above all, it's getting the younger people aware of where their food is coming from and having a tactile, real, hands-on experience dealing with it," he said.

John Laidler can be reached at laidler@globe.com.