Mukasey tells BC grads not to shy from tough calls 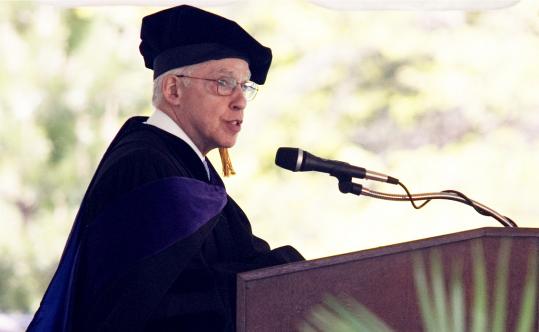 NEWTON - With protesters gathered outside Boston College Law School, US Attorney General Michael B. Mukasey urged graduates yesterday not to shy away from difficult choices, including ones that challenge their ethics or lead to "relentless public criticism."

Mukasey has sparked controversy by not taking any action in the national debate over what constitutes torture. At his confirmation hearings last fall, Mukasey refused to say whether he thought waterboarding, a simulated drowning technique the CIA has used, is legal. Yesterday, 25 people wore orange prison jumpsuits to protest his speech and what they described as a US policy that condones torture.

Christina Abbey, who wore a black hood over her head like those worn by some detainees during interrogations, said she felt deeply disturbed that the Jesuit college would invite Mukasey to be the keynote speaker at its graduation. A member of the Catholic peace advocacy group Pax Christi of Boston, she drove from Revere to voice her objection.

"A graduation speaker is supposed to be a good role model for the graduates," she said. "I just feel really upset about the fact that a Catholic institution would be putting this person up on the stage and saying, 'This is the thing to do.' "

In his speech, Mukasey also defended former government lawyers who drew up the legal basis of the Bush administration's use of harsh interrogation methods against suspects after the Sept. 11, 2001, attacks, saying they should not be held liable or face criminal charges. Some of the lawyers are facing civil lawsuits, including John Yoo, a former deputy assistant attorney general who worked in the Justice Department's Office of Legal Counsel from 2001 to 2003.

Mukasey said graduates should enter the workforce willing to separate their political views from their legal opinions. While he never mentioned waterboarding specifically, he acknowledged that the controversy over his actions, or lack thereof, triggered an angry response from some faculty and students. More than 20 faculty members had written him a letter asking him to decline the invitation.

In the wake of the flap, law school administrators decided not to give its highest honor, the Founders Medal, to Mukasey, as well as all future commencement speakers.

Peter Sollins, 32, one of the law school graduates, said he "didn't have a problem" with Mukasey's views or his speech.

"Everyone knows what his politics are," he said. "I didn't have a problem with him talking about politically charged issues."

But graduate Josmár Ronan criticized Mukasey's speech as too political.

"The message I heard is that being a lawyer is regurgitating the law," she said. "That's not what you expect to hear at a first-rate law school. Our calling is much higher."