Obama to stand in at Wesleyan graduation 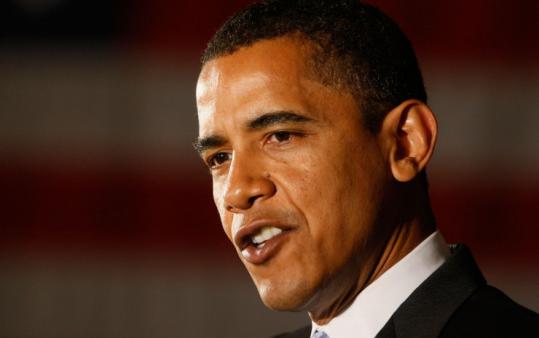 "Considering what he's done for me and for our country, there's nothing I wouldn't do for him," Obama said. (Joe Raedle/Getty Images)
Email|Print|Single Page| Text size – + By Michael Levenson and David Abel Globe Staff / May 23, 2008

HYANNIS PORT - US Senator Edward M. Kennedy yesterday canceled his first major public event after being diagnosed with a malignant brain tumor, a commencement address at Wesleyan University on Sunday. But he arranged for a replacement who should have no problem generating headlines: Barack Obama.

Yet even as Kennedy canceled the speaking appearance, he stood on a dock outside his family compound in Hyannis Port, pleading with his wife, Victoria Reggie Kennedy, to let him race his schooner Mya in the Figawi Regatta off Cape Cod this weekend. The race is a cherished part of the senator's Memorial Day tradition and something he has been talking about since he walked out of Massachusetts General Hospital Wednesday.

Kennedy's decision not to speak at the university but to push ahead with his regatta plans underscores how he is negotiating, moment by moment, how active he can be since his diagnosis. Yesterday, he read through papers on the porch of his home, but was also on the phone with aides in Washington, weighing in on pending legislation. The days ahead will include more personal decisions: what course of treatment to seek, where to seek treatment, and whether to try an experimental treatment.

His decision to yield the spotlight at Wesleyan to Obama, whom Kennedy has endorsed for president, was clearly the most significant shift in his immediate plans, and it immediately reverberated on campus.

The possibility of Obama replacing Kennedy first surfaced Sunday, when Obama spoke by telephone to Kennedy in the hospital, according to those familiar with the Kennedys' plans. Obama offered to help in whatever way he could, and the Kennedy camp followed up yesterday, initiating a call to Obama. The senators talked about Obama delivering the speech, and Obama immediately accepted the invitation.

"Considering what he's done for me and for our country, there's nothing I wouldn't do for him," Obama said in a statement yesterday, "so I'm looking forward to standing in his place on Sunday, even though I know I won't be able to fill his shoes."

Kennedy called it "an historic opportunity for the school and all those attending." His stepdaughter, Caroline Raclin, will graduate from Wesleyan on Sunday, and his son Edward Jr. will be celebrating his 25th reunion with the class of 1983.

Kennedy has no plans to attend the graduation ceremonies in Middletown, Conn., which would involve a full day of travel, said those familiar with his plans.

Students at Wesleyan said they were saddened to learn that his illness would prevent Kennedy from attending, but added that they were overjoyed that he had secured Obama to take his place.

Students had been told that Kennedy would get a prominent replacement if he was unable to attend.

But "I never, never in my wildest dreams would have thought Barack Obama," said Elyssa Pachico, 22, a humanities major who will graduate Sunday. "The reaction here is just a combination of thrill and shock . . . It's like Santa Claus is coming to commencement. It's better than Santa Claus! It's very exciting."

Matthew Connolly, 21, a junior, said: "It's a great surprise, and it's going to attract at lot of people. People will make the trip to campus just to hear him speak."

Kennedy's son Patrick, a congressman from Rhode Island, was back on the Hill after spending much of the week at his father's bedside. His voice shaking, Patrick Kennedy took the House floor and thanked his colleagues for their good wishes. "It means so much to me and to my family that all of you have us in your prayers," he said.

Back in Hyannis Port, the elder Kennedy said he had also been buoyed by the outpouring of support.

"It's been very uplifting," he said. "Very touching."

Susan Milligan of the Globe staff contributed to this report. Michael Levenson can be reached at mlevenson@globe.com.