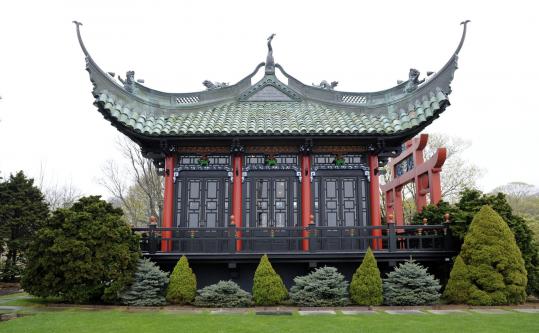 NEWPORT, R.I. - Rich socialite Alva Belmont spent a fortune building a Chinese-style teahouse behind her mansion in this seaside resort for Gilded Age industrialists. Now, nearly a century later, Chinese visitors are arriving in her backyard.

As China's economy booms, its emerging middle class is venturing abroad. Sensing a market worth billions of dollars, New England tourism officials from Newport to Boston to Vermont are trying to tap into it, making attractions accessible to Chinese-speaking visitors, offering cruises that cater to Chinese tourists, and marketing themselves in China.

More than 10,500 Chinese-speaking tourists visited the famed Newport mansions with bus tour groups in 2007, a number that museum officials expect will grow as an estimated 100 million Chinese travel outside their homeland by 2020.

"We have a greater and greater demand from our visiting public for translations in Mandarin," said Trudy Coxe, CEO of The Preservation Society of Newport County.

This month, Coxe signed an agreement with Bryant University at a ceremony inside Belmont's teahouse in which students at Bryant will translate the tour scripts for several of the city's mansions into Mandarin, the common language of China. The university will also provide Mandarin-speaking tour guides during the busy summer season.

Major Chinese tourist destinations such as Los Angeles, San Francisco, Hawaii, Nevada, and New York City have worked with the Chinese government to ease rules hampering the tourism industry. But much smaller players could also reap benefits from a broader agreement the US government reached in December that allows Chinese travel agencies to market packaged tours to the United States. It also permits US destinations to advertise directly to the Chinese public.

Few Chinese tourists, if any, visit the United States just to see the Newport mansions. But Chinese bus tour operators often stop for a few hours in Newport while shuttling between New York, Boston, Cape Cod, and Montreal, said Dan Fryer, who coordinates the bus tours for the Preservation Society.

In Newport, those tour groups generally head straight for The Breakers, a spectacular 70-room Italian Renaissance-style palazzo that the Vanderbilt family, steamship and railroad magnates, called their "summer cottage."

The need for better Mandarin translations became evident in September when Bryant officials took pingpong star Zhuang Zedong to The Breakers during a tour of Rhode Island. Zhuang's 1971 encounter with an American pingpong player during a competition in Japan helped spark "pingpong diplomacy" between President Richard Nixon and Chinese leader Mao Zedong.

Upon arriving at The Breakers, Zhuang received a tour pamphlet written in Chinese - but he couldn't read it, said his host, Denise Schwerin of Bryant, who speaks Chinese. The decades-old guide was written in Chinese characters no longer used in mainland China. The syntax was also incomprehensible, said Ma Sushan, a Bryant student from Beijing who helped write a new translation.

In Boston, Chinese bus tour groups hit well-worn tourist destinations such as the landmark Trinity Church in Copley Square, the campuses of Harvard University and the Massachusetts Institute of Technology, and Quincy Market for a spot of lunch.

"We knew there was a market there, and it didn't seem to be growing much," Hazell said.

Sensing an opportunity, the company paid a translator to record its harbor tour script into Mandarin. Now Massachusetts Bay Lines books harbor cruises for about 40 Chinese-language bus tour operators. Another upside to their Chinese tourist business: It provides a constant stream of business nearly the whole year, Hazell said, except during Chinese New Year.

Even Vermont is working to get a toehold in the Chinese market. Vermont's Chamber of Commerce operates an office in the Chinese commercial hub of Shanghai, said Chris Barbieri, director of its Asia Division.

Vermont's tourism department does not track the number of Chinese-speaking visitors to the state, so it's not clear whether that has yet drummed up new tourism business.

Later this summer or fall, Barbieri is hosting a TV crew from Shanghai filming a travel documentary about Vermont that will air in China. He hopes it will drum up more interest from Chinese tourists. "It's a market we don't feel like we can ignore," he said.