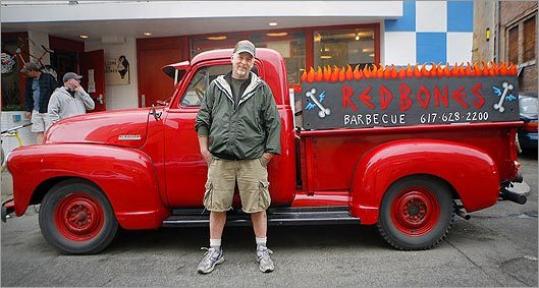 In Davis Square, restaurants have started discarding waste in compost and recycling bins and screwing in compact fluorescent light bulbs. They tidy up with green cleaning products and recycle cooking grease. Customers at two cafes sip beverages from biodegradable cups, and one restaurant encourages customers to ride their bicycles to dinner by providing a bike valet service.

It’s all part of a growing grass-roots movement called GoGreen Davis Square, an initiative for an environmentally sustainable square, and one this community hopes will jump-start the greening of other neighborhoods in the city.

The citizens and businesses of Somerville’s Davis Square x neighborhood are adopting a low-carbon ‘‘diet’’ to reduce their carbon footprint, the greenhouse gases emitted into the atmosphere that contribute to global warming, by conserving energy and reducing waste in their homes and workplaces.

‘‘The idea was to make Davis Square carbon-neutral and do it as a business district,’’ said Vanessa Rule, cofounder of GoGreen Davis and chairwoman of the nonprofit organization Somerville Climate Action.

Somerville Climate Action looked at a 1997 carbon inventory report by the International Council for Local Environmental Initiatives, which uses data on energy, transportation, and waste to calculate greenhouse gas emissions. The report showed that in Somerville, 46 percent of carbon emissions come from residential buildings, 30 percent from commercial and industrial buildings, and 21 percent from road transportation. Other communities have latched on to author David Gershon’s ‘‘Low Carbon Diet,’’ a 30-day program to reduce carbon levels by 5,000 pounds in a person’s home and community. But those involved with GoGreen Davis aren’t adhering to Gershon’s rules. They are creating a new model that focuses on greening businesses.

‘‘Businesses are consuming more than people,’’ said Rule. ‘‘It’s another way to reach the rest of the community, and I think it’s a great way for the business community to contribute to the life of the city.’’

Jennifer Park, coowner of Diesel Cafe and Bloc11Cafe, is working with GoGreen to make her restaurants waste-free. She says she has significantly reduced waste and saved money by composting and recycling. Instead of putting trash bags out on the curb every day, she says she now puts them out three times a week.

To conserve energy, restaurants have applied for energy audits from NStar, which recommends ways businesses can save money, such as using energy-efficient lighting. So far, the restaurants involved have saved about $6,000 a year from the NStar audit, according to Rule.

Park has noticed that the greening efforts are catching on with customers who frequent her two restaurants.

‘‘I think it’s built — even increased — loyalty of our customers for the kind of people who care about this area,’’ she said. ‘‘It gets people thinking about this stuff.’’ Redbones Barbecue has joined the initiative. The restaurant makes deliveries in a one-mile radius by bicycle, and has been providing a valet service for customers who arrive by bike since 1996.

‘‘If we can get more people to ride their bikes and walk in Davis Square, that’s a great thing,’’ said Redbones co-owner Rob Gregory.

Redbones used to spend $6,000 per year to remove grease used for cooking, according to Gregory. Now, the restaurant sells the vegetable oil from its fryers to Smartfuel in Seabrook, N.H., which turns it into biodiesel, or biodegradable fuel for vehicles.

Johnny D’s, too, made some changes to become greener. Last year, the nightclub and restaurant became a certified green restaurant by meeting environmental standards issued by the Green Restaurant Association. Johnny D’s installed energy-efficient lighting and refrigeration systems, changed the valves on its sinks and faucets to conserve water, and started recycling cardboard, glass, and metal.

Carla DeLellis, a cofounder of GoGreen Davis and the owner of Johnny D’s, thinks Davis Square is a fitting place for the initiative.

‘‘Green is becoming a way of life for people, and Davis Square has people who are on board with it,’’ DeLellis said.

In addition to the restaurant team, two architecture firms, Arrowstreet Architects and Mostue & Associates Architects, have been working with local businesses and landlords to install ecological rooftops with vegetation, as a way to avoid runoff.

A green office team was launched last month, with four companies that are hoping to create more sustainable office spaces. Some plans include teaming up to purchase office products locally to reduce truck trips into Davis Square, providing a website that offers the community leftover boxes and packaging supplies, and improving bicycle access and storage for employees who work in Davis Square.

Seth Itzkan, who runs two technology companies, Planet-Tech Associates and Charles River Web, is a member of the green office team. He works at 240 Elm St., the Social Security building, which has completed an NStar energy audit. ‘‘Our ultimate objective is to be carbon-neutral and reduce our footprint while saving money,’’ Itzkan said.

‘‘I’d like to see Davis Square set a precedent for business collaborations about environmental stewardship and leadership for sustainable economic development.’’

People involved with GoGreen Davis Square remain optimistic that other businesses will join their effort.

‘‘This is a relatively new endeavor. I think [people] are interested in the program,’’ Rule said. ‘‘The idea is, once we develop it we can apply it to other squares to help green the city overall.’’