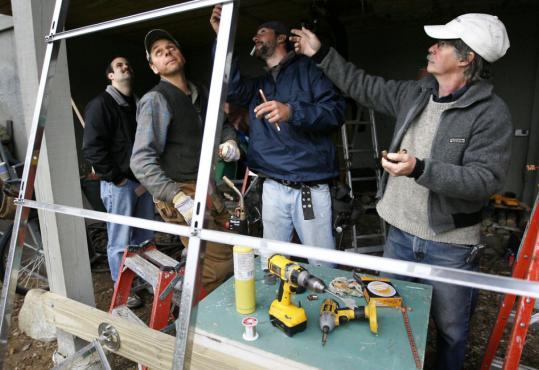 SANDWICH, N.H. - Last weekend, some 30 men and women arrived at a neighbor's home in this mountainside community, prepared for a day of hard labor. Their pay would be a pot of coffee, slabs of cornbread, and a spread of roast turkey sandwiches.

In days past, the end result might have been a barn. But in a twist on the traditional mutual aid event of a barn raising, the neighbors put up a solar-heated water system.

As the price of oil rises and the pressure to go green mounts, neighbors in this and other New England communities are coming together for daylong "energy raisers," installing solar collectors that can reduce a home's hot water bill by as much as 80 percent.

The volunteers, in North Face jackets and weatherized boots, wasted little time on Saturday. Shortly before 9 a.m., like a hive of bees, workers descended on the house and set about a variety of tasks, such as cutting pipes and assembling the solar collector. Others milled about, sipping coffee and sharing their concerns about the fossil fuel burned shipping goods from China to the United States.

Andrew White, attending his first energy raiser, did more observing than hands-on work, hoping to learn the ins and outs of environmental plumbing.

"It's going to feel good to step into a hot shower and know that it's coming from the sun," said White, who hopes to have the crew install a system at his house.

The energy raisers so far have been concentrated in New Hampshire, where neighbors in Sandwich, Plymouth, and a handful of surrounding towns have equipped 23 homes with solar and other alternative energy systems in the past three years; the group has scheduled 12 energy raisers for this summer. Another group held Massachusetts' first energy raiser last month in Buckland, and a Cambridge group is hoping to begin hosting energy raisers soon.

Nationally, interest in solar hot water systems is growing. After a brief period of popularity during the energy crises of the 1970s, the systems faded as an alternative to oil and natural gas, partly because they tended to be expensive. By eliminating labor costs, the New Hampshire group has been able to reduce the price from more than $10,000 for a conventionally installed system to as little as $3,000, organizers of the group say. Federal tax credits and local company rebates - such as those available in New Hampshire - can reduce the price even further, to as low as about $1,500, they say.

The idea of bringing a community together to install the systems was the brainchild of two longtime friends, Sandra Jones, a onetime welfare-to-work program director, and Peter Adams, a digital media company owner. Five years ago, as oil prices were rising, the pair became increasingly concerned about energy consumption and wanted to do something to offset the trend.

"We didn't want to put out magazines or organize conferences," Jones said. "We wanted to have a real practical application."

Solar hot water systems, with their relative simplicity and immediate results, fit the bill. The pair wanted installation of the systems to be community events, like the barn raisings Adams had seen as a boy growing up near Pennsylvania's Amish country.

Jones and Adams immersed themselves in the instruction manuals of solar hot water collectors. They recruited a plumber and several area contractors with technical know-how to volunteer their help and came up with these rules for the projects: Neighbors who donated their labor at three energy raisers were eligible to have the technology installed at their own homes. Afterward, the neighbors would be expected to provide labor at additional energy raisers, to repay the favor.

"We thought early on that it would just be a bunch of friends getting together, but it's turned into this," said Adams, as he waved a hand at the dozen workers soldering pipes, while others craned necks to watch the work in the hope of learning the craft.

The systems that the group installs are sleeker and more efficient than the typical solar panels of old. Sturdy glass tubes in a metal frame absorb energy from the sun, heating antifreeze that circulates in copper pipes. The heated antifreeze is pumped to a hot water tank in the house. Conventional water heating systems are retained as back-ups for prolonged periods of cloudiness, when solar systems can't produce enough heat.

Today, the group, a nonprofit called the Plymouth Area Renewable Energy Initiative, has 229 members. The group estimates that it has saved homeowners more than 10,000 gallons of oil annually that would have gone toward heating hot water.

On Saturday in Sandwich, as a light drizzle fell at 3 p.m., workers adjusted copper pipes and prepared to pop in the last of the glass tubes that function as the heart of the collector.

The honor, everyone agreed, should go to the home's owner, Ann Burghardt, a retired newspaper owner.

"You energy radical, you!" said Rich Benton, a local builder and volunteer, as Burghardt put the tube in place, marking the end of the energy raiser.

The volunteers clapped and shook hands. One handed Burghardt a small box.

"A bar of soap," said Carl McNall, a retired computer marketing executive who had held an energy raiser at his home in October, "for your first solar shower."