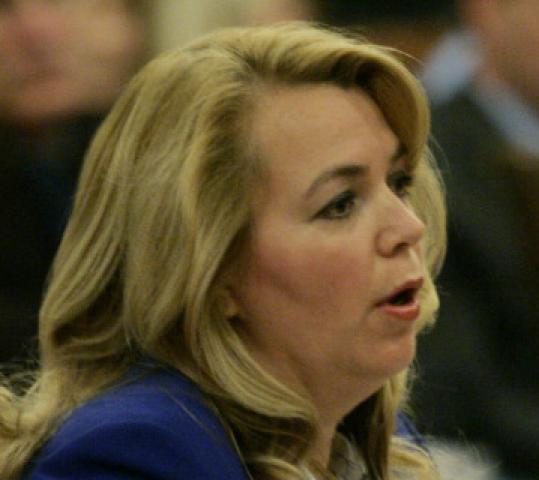 Callahan said a colleague warned her that he "could really hurt you if I wanted to." (Globe file photo)
Email|Print|Single Page| Text size – + By Andrea Estes Globe Staff / May 6, 2008

Moving to contain fallout over an alleged threat made by a House member Thursday against a female representative, House Speaker Salvatore F. DiMasi took the unusual step yesterday of asking the House Ethics Committee to investigate.

The move by DiMasi brought an official curtain of secrecy around the incident, in which Representative Jennifer M. Callahan said a colleague warned her on the House floor that he "could really hurt you if I wanted to."

Callahan's public disclosure of the comments during debate on the House floor the next day brought proceedings to a standstill. The Sutton Democrat has not identified the House member who she said uttered the threat, but she has implied it was related to intense infighting that has gripped the House recently.

Rifts have developed between rivals seeking to succeed DiMasi. DiMasi says he has no intention of stepping down, but speculation about his future has increased after a series of Globe reports about actions he took on legislation that helped his friends and associates.

DiMasi's office sent out a brief press release yesterday announcing he had ordered the probe by the House Ethics Committee but would not respond to questions.

Ethics Committee chairman James Fagan, a Taunton Democrat, citing the committee's confidentiality rules, would not comment on the allegations. He also would not say how the committee will investigate the incident, or what action it might take if it concludes a threat was made.

Two Democratic lawmakers said Callahan told them the colleague who made the remarks was James E. Vallee, a Democrat from Franklin, who is assistant vice chairman of the House Ways and Means Committee. Vallee is a key backer of Ways and Means chairman Robert DeLeo, who is vying with majority leader John H. Rogers to succeed DiMasi if he should leave.

Neither Vallee nor Callahan returned phone calls yesterday. But another lawmaker who saw Callahan speak to Vallee Thursday on the House floor said their conversation seemed cordial, not confrontational.

"I was 10 or 12 feet away," said the lawmaker, who asked that his name not be used because House Ethics Committee rules prohibit members from discussing pending matters. "It was a professional, collegial conversation. She spoke for 95 to 99 percent of the conversation and at the end they embraced. I asked Vallee, and he said that was the only conversation they had."

After Callahan's comments Friday on the House floor, several female legislators met in assistant majority leader Lida Harkins's office, expressing concern that male legislators may be targeting female colleagues, said one of the female House members who attended the meeting. Harkins told them DiMasi was investigating what was believed to be "an isolated incident," the House member said.

In an interview with the Globe Saturday, Callahan said she thought the lawmaker was trying to "silence" her.

"The words used were very unnerving, made me uncomfortable, and I couldn't sleep that night," she said. "I'm not going to let someone make very serious words to me and threaten to hold my legislation hostage, no matter what the motive. I'm just not going to take that - not in the House of Representatives, an institution where we're supposed to be treated with respect. . . . I find that particular kind of behavior extremely insulting."

Callahan, a registered nurse, told the Associated Press that she and the other lawmaker were discussing a healthcare amendment she had been pressing earlier in the week.

She had been appealing for additional funding from the Ways and Means Committee for "palliative-care" for children, lawmakers said.