In the 1960s, Michio Kushi brought a new diet to America - and sowed the seeds of the health-food movement 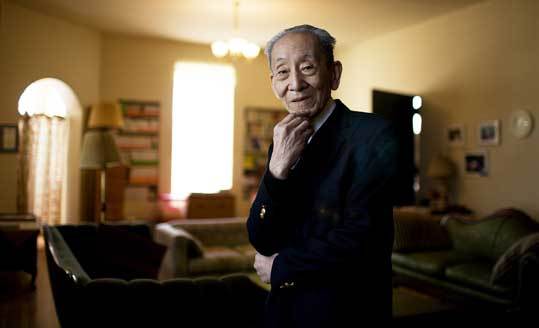 (Globe Staff / Yoon S. Byun) Michio Kushi, 82, at his home in Brookline, where he and his first wife, Aveline, helped spread their concept of diet as a path to health.
By Elizabeth Gehrman Globe Correspondent / April 27, 2008

The story has a cinematic quality: a 20-year-old Japanese soldier, at the end of World War II, being sent back to his family and his university in Tokyo by train. Because the Japanese government does not want its citizens to know about the atomic bombs America has dropped on two of its cities, the rail car's windows are boarded as it slowly trundles through Hiroshima. But shards of light gleam in here and there, and the young Michio Kushi gets a peek at the charred remains.

"The atomic bomb made disaster of Hiroshima," says the 82-year-old Kushi today, sitting at an enormous carved-oak antique table in his comfortable Brookline dining room. "Three hundred thousand people in a moment, annihilated. I was so impressed. I said, no more war."

It was then that Kushi decided he must change the world. And he has - or at least large swaths of the cultural landscape in the United States.

With his first wife, Aveline, Kushi introduced the macrobiotic and natural-foods movement to this country nearly five decades ago from their various homes in the Boston area, including, since the early 1970s, his 11,000-square-foot Jacobean Revival house in Brookline. Along the way he picked up acolytes and influenced the widespread adoption in this country of Japanese practices, including shiatsu, aikido, and sleeping on futons, and planted the seeds for the organic-foods movement.

Kushi's home, built in 1865 by noted architectural firm Peabody & Stearns and once part of the Cardinal Cushing College campus, became a mecca for Americans and Europeans interested in whole foods and Eastern philosophies. According to a son, Norio, "My sister once compiled a list of all the people who stayed with us, just from memory, and she came up with well over 2,000."

Today the house is on the market - it's become too much to maintain - but photographs lining the bookshelves in the living room bear witness to its former habitues. There's one, for example, of Gloria Swanson's wedding - her fifth, which took place in this very room. Friends of Swanson's, John Lennon and Yoko Ono, popped by one day, too, and there is a picture of the couple with one of Kushi's sons. Actor Dirk Benedict stayed in the house; Dennis Kucinich became a friend; and Dr. Benjamin Spock and Livingston Taylor visited. Gwyneth Paltrow was supposed to come to Brookline, but the Kushis decided to travel to New York to see her instead.

Other houses the family lived in over the years hosted the likes of musician and iconoclast Frank Zappa, and musicians Mimi and Richard Farina, but the bulk of those who sat at the feet of Kushi were everyday people.

"When he came here," says Katherine Ott, a curator of medicine and science at the Smithsonian Institution's National Museum of American History, which holds a significant Kushi collection, "he brought so many new ideas and articulated so many things that people had never been exposed to. He was a catalyst and a teacher and a healer. He formulated a lot of approaches to integrating wellness practices into your spiritual practices. I think of him as a cultural treasure."

When asked about the Kushis' influence, Bread & Circus cofounder Susan Guillory said simply, "How many hours do you have?"

After that fateful train ride, Kushi, the son of two "internationally minded" educators and a student of political science at Tokyo University, began to focus increasingly on the idea - promoted at the time by political leaders such as Mahatma Gandhi and Jawaharlal Nehru and intellectuals like Norman Cousins - of a single global government made up of independent nations. "Especially to control nuclear weapons," he says.

Kushi began making inquiries, and when Cousins sponsored him to attend the United World Federalists convention in New York in 1949, he was thrilled.

"I arrived here on Thanksgiving Day," he recalls, in heavily accented English.

Over the next six months, Kushi says, he spent countless hours reading about utopian movements throughout history and meeting with many of the leading lights of World Federalism. He also kept up a correspondence with George Ohsawa, one of Kushi's teachers in Japan who recounted how he had cured himself of tuberculosis as a teenager using the yin-yang concepts of a balanced, whole-foods diet, exercise, simple living, and being in touch with nature, society, and oneself.

"George was thinking that in order to have peace and prevent sickness," Kushi says, "we should change diet for mankind. He didn't call it yet macrobiotics, but he was teaching that diet is the basis for war. According to history, meat-eating peoples and vegetable- and grain-eating peoples - big difference in the number of wars. Because through eating, personal nature change, way of thinking and physical condition change."

Kushi didn't quite understand this theory, he recalled, until he spent time observing passersby in Times Square. He watched thousands of people, he says.

"Some is fat, some is skinny, some is blond, some is dark. And I suddenly understood humanity. Human nature is made by two factors. One is environment - natural environment and social environment. Second is what we take. We take of course oxygen and sunshine, but also food we choose every day by our own freedom. If we choose different food and different cooking, a different nature come out. So I could understand at that time why Ohsawa was saying diet is an important factor for world peace."

He began spreading the word. He started doing import-export in New York - where he also opened two restaurants - but soon realized, he said, that "this has not so much meaning. I have to go more toward education in natural food."

By 1964, Kushi was lecturing on the logistics and philosophy of the natural-foods way of life, and doing shiatsu massage on the side. Aveline, who was giving cooking classes, visited Martha's Vineyard one summer, and returned saying the couple must move their young family to the Boston area.

They found a receptive audience for their ideas. "Many hippies started to come," Kushi says.

"Back in the '60s and '70s," says Ott, "Kushi was one of the key figures of the counterculture. Everyone knew who he was and came to see him and study with him and eat his food. A lot of historical streams that have now become common knowledge - eating tofu, health-food stores, eating locally - can be traced back to Michio and Aveline."

The couple usually had six to 15 students staying at their house at a time, for anywhere from three months to a year, says Kushi. Both at home and at the Arlington Street Church, Kushi lectured (the cost was $2.50 a class) on acupuncture, natural agriculture, curing sickness, astronomy, physics, relationships, transmutation, and a host of other topics. Aveline continued to teach people how to prepare the foods that were so important to their philosophy, and both Kushis wrote books; Michio wrote or co-wrote nearly 100.

"Japanese culture wasn't very well known in New England," he says. "In all of Boston there was only one Japanese restaurant." The couple began packaging bulk food in their home to sell to those who came to their cooking lessons and lectures. By 1966, they had opened a natural-foods store on Newbury Street called Erewhon, which was quickly followed by two more locations.

Despite criticism from the medical establishment, word of mouth continued to spread, until eventually the Kushi umbrella sheltered a dozen "study houses," two area restaurants, Erewhon-West in Los Angeles, five East West Foundation centers in major American cities, the Kushi Institute, now located on 600 acres in the Berkshires, and a magazine, East West Journal, today published as Natural Health. Though the stores are no longer owned by the family, erewhonmarket.com proclaims itself "LA's leader in natural and organic foods."

Aveline died in 2001, but Michio Kushi continues to fulfill his purpose in life, to be a sensei - a teacher or mentor. He does consulting work for health resorts in Europe and Japan, continues to write, and maintains a limited schedule of speaking engagements. A warm, hospitable man with a ready smile and hearty laugh, he lives in the Brookline house with his second wife, 47-year-old Midori, his son Norio, two grandsons, and Marc van Cauwenberghe, a visiting medical doctor from Belgium who is transcribing Kushi's video and audio works.

Like a man with many generations of descendants, Kushi continues to have a ripple effect on American society. Companies started or brought to this country by students of Michio and Aveline's include not only Bread & Circus, but also Kashi cereal, which is named in part after Kushi; Shinera, perhaps the country's first futon maker; Horizon Organics; soy sauce and tamari manufacturer San-J; Eden Foods; and , the nation's largest organic-foods distributor.