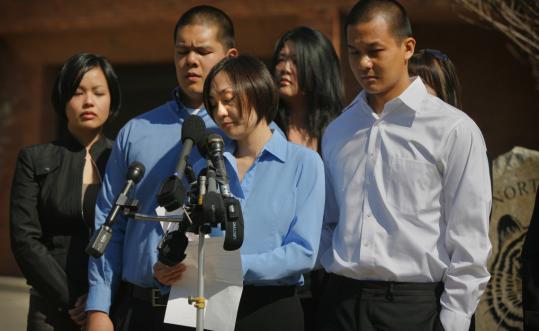 NEWTON - Joining the family of a cheerleader who died last week, a Newton legislator yesterday called for increased safety practices to protect athletes participating in a sport that has grown more athletic and risky.

"Cheerleading used to be an activity," said state Representative Peter Koutoujian, chairman of the Joint Committee on Public Health.

"It's now a highly competitive sport, and I don't think people appreciate how it has changed."

Koutoujian said he is working with cheerleader Lauren Chang's family to form an "appropriate response" to the 20-year-old's death.

He said that response could include legislation to regulate cheerleading training and competition safety practices, having medical personnel required at events, or starting a public education campaign about how athletic and often risky cheerleading has become.

Chang died Monday, a day after performing at the Minuteman Cheerleading Championships with her team from Energized Athletics, a gym in Watertown. Near the end of the team's routine, Lauren ran across the back of the floor before collapsing, apparently unable to breathe.

"We rushed all the way out," Chang's brother Jason told the Globe yesterday, describing how they arrived at Saint Vincent Hospital just as Lauren Chang was being transferred to UMass Memorial Medical Center.

"She was pretty much in a coma by then," he said.

An autopsy showed Lauren Chang died of complications after her lungs collapsed following an apparent kick to the chest. Complete details of how the cheerleader died are still emerging.

According to Les Stella, a representative from the US All Star Federation for Cheer & Dance Teams, Lauren Chang may have been injured last Sunday while catching another teammate who had been thrown into the air to perform an airborne maneuver known as a basket toss.

However, Stella said, he won't know for sure what happened until he sees a video of the performance.

Medics responded to the incident within five minutes, according to a spokesman for American Medical Response, a private ambulance service.

Yesterday, Lauren Chang's siblings said they would not speculate on whether those five minutes could have saved their sister's life.

"We'll never know that outcome . . . five minutes is a long time," Jason Chang said while speaking at a press conference outside Newton North High School, where his sister started cheering during her junior year.

The press conference yesterday was the first time the Chang family has spoken publicly about Lauren's death.

"Lauren died doing what she loved, cheerleading and being with her friends," Nancy Chang, Lauren Chang's sister, said at the press conference.

"We hope her death will shed light on the inherent risks of cheerleading, and we hope that additional safeguards are taken to insulate against those risks."

Cheerleading is not heavily regulated in the Bay State, and - at least in schools - falls under the purview of the Massachusetts Secondary School Administrators' Association and is designated an activity, not a sport.

At least one state has already tried to regulate cheerleading and safety issues.

In 2005, Indiana legislators passed a law requiring the state Board of Education to establish and enforce "standards and guidelines concerning the safety of students participating in cheerleading activities."

According to the Indiana Association of School Principals website, the state board has not yet determined exactly what regulations to enact.

Lauren Chang's cheerleading friends paid her tribute at Jamfest, a competition in Springfield, by wearing shirts and buttons emblazoned with a picture of the cheerleader from her MySpace page.

"It's definitely been hard for them," said England.

"You've got to understand. They all turned around and saw what was happening. They saw her on the floor."

Though Lauren Chang's team did not perform at the event, England said, others from her gym used their grief as fuel to do well in the competition and make their former teammate proud.

"She was the most important person on the team," said Dannie Halloran, who cheered with Lauren and later wept as he left the Springfield convention hall.

"She was definitely the face of our gym."

Lauren Chang was always drawn to tumbling, and high school friends later persuaded her to cheer, said her siblings, who spoke with the Globe following yesterday's press conference.

Nancy Chang, Lauren Chang's sister, held back tears as she and her brothers spoke of the sister who loved to bake macaroons, blueberry muffins, and peanut butter and sugar cookies.

She always seemed to burst into the room with her infectious smile, they said, and her animation always stole the show.

When Lauren Chang started tumbling, they said, her family worried, but they supported the cheerleader for being so passionate about her sport.

"This was something Lauren loved, and doing it brought her so much joy, and for us to say don't do it is something she wouldn't have wanted," Nancy Chang said.

"There needs to be something for their protection. . . . They are such great troopers for getting injured and going on . . . but maybe that's not OK," she added.