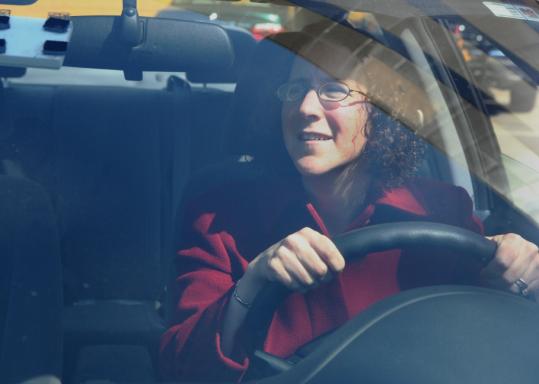 MIT professor Amy Finkelstein owns a Fast Lane pass and confesses that, even as she has spent a few years considering tolls, she does not know how much she pays on her frequent trips to Sharon to visit her in-laws. (Wendy Maeda/Globe Staff)
Email|Print|Single Page| Text size – + By Noah Bierman April 13, 2008

Quick: How much did you pay the last time you drove down the Massachusetts Turnpike?

If you answered with an exact figure, down to the nickel, you probably paid cash. If you said, "I don't know," odds are good that you own a Fast Lane pass.

That ignorance may be costing us.

Amy Finkelstein, an economist at the Massachusetts Institute of Technology, is getting ready to publish a paper that demonstrates the consequences of electronic tolling, which has been adopted around the country over the past two decades. Her conclusion: It makes us forget how much we pay, and it makes lawmakers more likely to make us pay more.

For her research, she studied 50 years' worth of records for 123 toll roads across the country, reviewing tolling rates before and after states adopted Fast Lane. And she and her research assistants spent a couple of days last year at the Brimfield, Mass., antique fair asking 214 patrons if they remembered how much they paid in tolls to get there.

When Finkelstein interviewed people at the fair, she could tell who paid cash and who paid electronically "just by whether they sort of squinted when they looked at me," she said. "It was just amazing."

Sixty-two percent of the drivers who used a transponder said they had no idea what the tolls were. An even higher percentage, 85 percent, were wrong when they guessed.

Cash-payers, on the other hand, guessed incorrectly only 31 percent of the time. Even when they were off, it was generally by less than a quarter whereas electronic payers were off by more than a dollar on average.

Now we get to the consequence. Using toll data from around the country, and noting when each road added a Fast Lane or its equivalent, Finkelstein found a pattern.

Once 60 percent of drivers have bought a transponder, tolls rise 20 to 40 percent more than they would have otherwise. And, once everyone forgets how much they are paying, lawmakers no longer wait to raise rates in non-election years, her research shows. The "political business cycle," a great economics term, goes away, she said.

Despite all this data, it's hard to condemn the Fast Lane. It makes life infinitely easier for commuters - shortening tie-ups at the booths, sparing us the arduous task of digging for change.

Turnpike officials have made them even more alluring, offering a discount to Fast Lane users. The Turnpike Authority has also lowered the price of transponders and announced a new deal last month to make them available at the Registry of Motor Vehicles, all part of a larger plan to convert more commuters.

Finkelstein's study does nothing to prove a vast Turnpike conspiracy. Most states began using the electronic system to cut down on lines at the booth and reduce the number of workers collecting salaries and benefits. Now, some states are experimenting with electronic tolls to create express lanes that let drivers avoid traffic if they are willing to pay more.

"The cost of collection [using] electronic tolls is much lower than the cost of an actual toll collector," said Judy Pagliuca, a Turnpike board member. "Primarily it's driven by that, not driven by the political circumstances that surround raising tolls."

But there are always financial pressures to raise tolls, and it's easier if fewer drivers are paying attention. The Turnpike Authority raised them in January, with the promise to raise them again next year if the Authority's dicey financial situation fails to improve.

Finkelstein's study also has implications for the MBTA, which adopted the Charlie Card system last year and has been encouraging riders to use the electronic pass with discounts. The T also raised fares last year.

Finkelstein takes no position on the politics of toll and fare increases. She performed her research in part to test a broader economic hypotheses - that hidden taxes go up more than visible taxes.

But she does own a Fast Lane pass and confesses that, even as she has spent a few years considering tolls, she does not know how much she pays on her frequent trips to Sharon to visit the in-laws.

"I should look, right?" she said. "Maybe if I looked it up I'd discover that it's really expensive and we'd visit them less."

The study can be found at http://econ-www.mit.edu/files/2098

Rail on-time performance
The private company that runs commuter rail for the MBTA, The Massachusetts Bay Railroad Co. reports 85.5 percent of its trains were less than five minutes late in March, 5 percentage points better than in February. A recent scheduling change that gives trains on the Worcester/Framingham line more time to reach their destination helped push on-time performance to 92 percent for the month.

Can't get there...
Two or three lanes of Interstate 93 South approaching and through downtown to South Bay will close 10 p.m. tomorrow to 5 a.m. Tuesday, and 11:30 p.m. to 5 a.m. Tuesday through Friday.

The underpass from Storrow Drive eastbound to I-93 North and Tobin Bridge will close 11:30 p.m. to 5 a.m. Tuesday and Thursday.

Access from Frontage Road and Albany Street to I-90 East and Logan Airport will close 11:30 p.m. tomorrow to 5 a.m. Tuesday.

The Clarendon Street onramp to I-90 West will close 7:30 a.m. to 3 p.m. tomorrow through Wednesday.

The ramp from Harborside Drive to I-90 West/Ted Williams Tunnel will close 10 p.m. tomorrow to 5 a.m. Tuesday.

For the next several months maintenance crews will be doing repair work 7 a.m. to 3 p.m. on sections of I-90 East and West from the I-90/I-93 Interchange in Boston to the New York State line.

The four lanes on Washington Street and Harrison Avenue are reduced to two lanes traveling on the newly constructed bridge deck.

Please send complaints, comments, or story ideas to starts@globe.com. The column can be found at boston.com/starts. Globe Correspondent Sarah M. Gantz contributed to this report.