Contend children should have been removed long ago 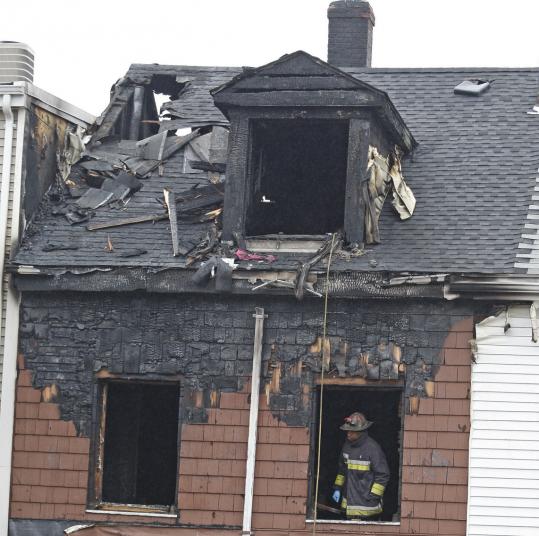 As the arson investigation of a South Boston blaze that killed two children entered its fourth day yesterday with no arrest, a child-protection advocacy group expressed outrage that the children were living in the house after the state had received a litany of neglect complaints about the family.

The Globe reported yesterday that the state Department of Social Services investigated their mother, Anna Reisopoulos, 34, for 11 separate complaints of neglect and one of abuse since 1995 and had legally removed her children from her home in 2003. But the children continued to live with her, neighbors, friends, and school officials said - and DSS continued to receive reports of neglect.

Yesterday, the agency said it had visited the home six times since February, most recently on Friday, two days before the fire. It also released a timeline of complaints showing that it had received the most recent neglect reports in February and March. It said the complaints were substantiated, but it refused to release details.

On Sunday one of the children that had been ordered removed from the home, 14-year-old Acia Johnson, died in the fire with her 3-year-old sister, Sophia, who had not been subject to a removal order.

"No one should have that many complaints against them and have kids in the house," said Susan Molina, founder of The Yellow Ribbon Kids Club, a nonprofit watchdog organization and longtime DSS critic. "If the governor isn't rolling some heads on this one, he needs to answer to these dead kids."

Juan Martinez, spokesman for the Executive Office of Health and Human Services, which oversees DSS, said yesterday that neglect cases are closed when new guardians are appointed. The new guardians, a grandmother in Acia Johnson's case, are then responsible for the children's well-being, he said.

Martinez could not explain why DSS did not take stronger action to protect the children, because he did not immediately have access to the information, he said.

Fire investigators believe someone used an accelerant to light the Johnson children's house on fire about 3 a.m. Sunday, two city officials briefed on the investigation have told the Globe. Homicide detectives have been questioning possible witnesses and have combed the scene and another apartment for clues.

Steve MacDonald, a Fire Department spokesman, declined to give new information yesterday, saying only that the investigation is ongoing.

Elaine Driscoll, police spokeswoman, also said only that the investigation is continuing.

Yesterday afternoon, dozens of children and teenagers continued to flock to a street corner memorial for the two sisters that has been adorned with burning candles, piles of stuffed animals and flowers, as well as many handwritten messages. Some of the children and teens lingered for hours. At one point, the children formed a circle for a moment of silence, but a few children began sobbing loudly.

Several neighborhood mothers, who have been standing on the corner to console the children, accused city leaders of turning their backs on the neighborhood in a time of mourning, and demanded that Mayor Thomas M. Menino send counselors.

"Look at these kids, they are hurting," said Justine Hathaway, who had her arms wrapped around four girls, one of whom was crying hysterically. "Kids are suffering right now because there is no one counseling them here at the corner. They don't know how to deal with their grief."

Added Linda Shields, as she held one girl close to her: "We don't know what to say. I'm getting lost for words. . . . All I keep telling them is to think of those kids being in their hearts and to remember the happy memories and that God made them angels."

But the words did little to soothe some teens.

"Even if you think happy memories it brings back pain," said a 15-year-old girl named Alice, who declined to give her last name as she brushed away her tears.

"You only have those memories, and you know you'll never have another happy memory. And the ones you have will fade away," she said.

Responding to complaints from the mothers, Barbara Ferrer, commissioner of the Boston Public Health Commission, said last night that she would make sure to send a grief counselor to the street corner memorial this afternoon. She said that a full-time grief counselor has been circulating in the neighborhood since Sunday and that other counselors have been provided at such places as Gavin Middle School and Condon School and Community Center.

"It's good to hear feedback from these mothers where there are gaps in services," Ferrer said. "We are trying to be as responsive as possible. We've had a lot of requests for support. . . . We totally apologize if we have missed this site."

Children have been writing messages with chalk on the street and sidewalk.

Down the street from the corner memorial, in the house where the two sisters died, a white teddy bear with a red bow hung beside the doorway, and someone drew a heart with red spray paint on the plywood that covered the door along with a message: "RIP ACIA SOPHIA WE LOVE U."

A special state legislative committee on child abuse and neglect met for the first time yesterday. The group is charged with ironing out differences between Senate and House versions of a bill that seeks to improve the state's handling of such cases.

Material from the State House News Service was used in this report. John R. Ellement of the Globe staff contributed. Donovan Slack can be reached at dslack@globe.com.