For many, a day to reconnect with tradition 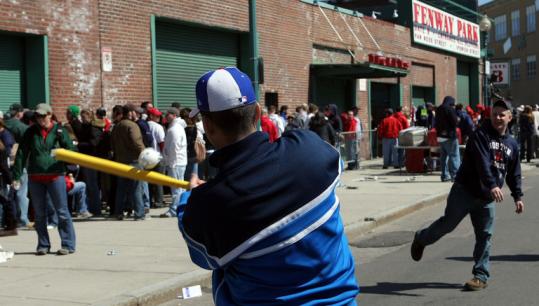 Vendors hawked peanuts and programs, the smell of sizzling sausages filled the air, and the streets were a sea of red, white, and navy. As if there was any doubt about when spring officially starts on Yawkey Way, even the sun came out, giving winter-weary Red Sox fans one more thing to celebrate at opening day yesterday.

"It's a time of renewal and hope for a new season; you hope the team will open up and bloom," said Ellen Trousdale, who made the 1 1/2-hour trek to Fenway from Wendell with her two sons, Kevin, 16, and Peter, 10.

Though the family has been to games before, this one had special significance to them, and not just because of the pregame World Series ring ceremony. It was their first game since the death of Trousdale's husband, Lee, an avid Red Sox fan who died of cancer two years ago.

"I brought them here to honor him and his memory," said Trousdale, who wore her husband's lucky hat from the 1999 All-Star game and carried a vial of his ashes near her heart.

"I wanted to share with them the magic of opening day," she said. "I can't think of a better way to start the season."

With the sun shining, the 2007 championship flag flying in the outfield, and an early lead that turned into a 5-0 win for the home team, many of the Red Sox faithful said the day was as much about savoring last season as it was anticipating the upcoming one.

After 22 years, the city made peace with a man it had once made into an icon of its baseball failings, former Red Sox first baseman Bill Buckner.

As he made his way to the mound to throw out the ceremonial first pitch, the crowd stood and roared a long ovation that brought tears to Buckner's eyes.

"I was so pleased to see Buckner get a standing ovation," said Glenn Morrow, a 53-year-old fan from Somerville. "It shows Boston is a classy town. I was delighted."

With the likes of Bobby Orr, Bill Russell, and Tedy Bruschi in attendance, there seemed no end of magical moments, from former Red Sox infielder Johnny Pesky (he of the Pesky Pole fame) shouting "Play ball!" to Manny Ramirez sprinting around the bases in the third inning.

"It's great, everything I thought it was going to be," said Boston teacher Crista Roses, who let out a shrill scream as Ramirez hit a triple-turned-homer.

Tickets to Fenway are never easy to get, and with members of last year's team collecting their championship rings before the game, the tickets were at a premium. Eddy Colasacco, of Natick, considered the $385 he paid for a pair of standing-room tickets on the Green Monster reasonable.

"How many times in your life do you get to see a ring ceremony?" he asked.

The 41-year-old salesman has been going to games for more than 25 years with his twin brother, Anthony.

After missing opening day in 2005, they couldn't miss yesterday's festivities.

"We were coming before there was a Red Sox Nation," said Anthony Colasacco, who wore a red windbreaker signed by former hitting coach Ron "Papa Jack" Jackson.

Fans were packing Green Line trains and getting off at Kenmore Square as early as 10 a.m. Among them was Barry Thompson, a 64-year-old engineer from Cotuit who's been at every opening day since 1978.

"It's the best the park's going to look all year," he said before making his way to Baseball Tavern to kick back a couple pints with friends before the game.

Fans hoping to get tickets started arriving even earlier, and by 11 a.m. a line at the ticket window stretched most of the way down Lansdowne Street.

One of the first in line, Brian Comeau, 23, had been camped out with his buddies for more than 28 hours.

"We've been doing this for years," he said. "If you buy ahead, you're paying a premium for seats that aren't as good as the one's we'll get today for face value."

At the other end of the line, Matt Maderos had wandered over from his job at Massachusetts College of Art and Design during his lunch break and decided on a whim to see if he could get tickets.

"I've got a snowball's chance in hell," said the 37-year-old Quincy resident. "I just wanted to come over and soak it all up."