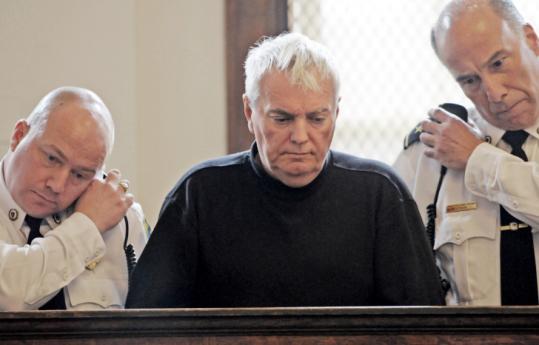 Robert J. Shea was known to neighbors as the man who often hosted pool parties at his home on summer days, drawing boys from the neighborhood. Twice in recent years, Shea, a custodian and longtime basketball coach at Everett Middle School, was investigated by authorities for possible misconduct toward youth, but those cases were closed.

Yesterday in Malden District Court, Shea was charged with two counts of rape and three counts of indecent assault and battery on a 12-year-old boy who lives near his three-decker on Jefferson Avenue. He pleaded not guilty and was ordered held on $15,000 cash bail. If Shea posts bail, he will have to wear a GPS monitor. His next court date is May 5 for a pretrial conference.

"He's had some of the young boys in his pool," said Cheryl Crane, 40, who lives near Shea. "I thought it was kind of odd that he always had boys and young adult males over there. I'm not surprised by what I'm hearing now. People around here kind of talked about his behavior with the boys."

Frederick F. Foresteire, superintendent of Everett schools, said Shea has been suspended from his positions with pay pending the outcome of the court case. Foresteire said that Shea had been the subject of two prior investigations conducted by the Department of Social Services in 2003 and the Everett Police Department in 2005.

On Friday, the mother of the 12-year-old went to Everett police, prompting an investigation by the Middlesex district attorney's child abuse unit. Police arrested Shea, 57, at his home on Sunday.

Yesterday, prosecutors alleged that Shea befriended the boy in the fall of 2007 and abused him for six months. They said Shea would take the boy to a restaurant on Saturday mornings for breakfast and invited him to his house.

Prosecutors allege that incidents of abuse occurred at Shea's house and at the old Everett High School site.

"We met with the boy and the mother, and he has recall of very specific events," prosecutor Michael Chinman said yesterday during the arraignment.

Shea's attorney, Mark Griffith, said his client is "completely shocked" by the charges. Griffith told the court that Shea has worked in the Everett School Department for 25 years; he has been a junior varsity basketball coach for 14 years. Griffith said Shea also received a Golden Apple Reward for exceptional performance at his job. "My client has been a friend to this young man, a big brother, under the knowledge of the boy's mother."

Griffith added, "To suggest he [Shea] was not seen by others in the neighborhood doing this alleged behavior begs the question of credibility. He's been around children all the time for the past 25 years and all we have is one allegation."