For veteran, a new home, life, and wife 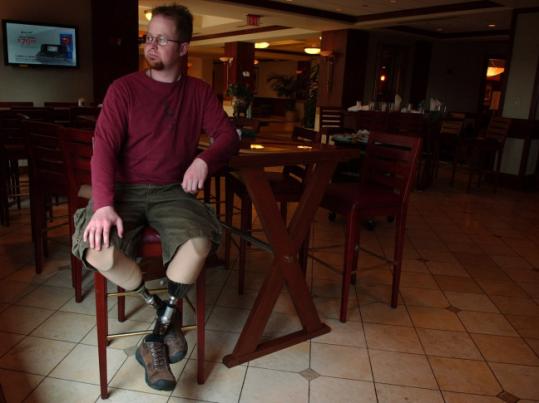 Brian Fountaine will marry on June 8, the two-year anniversary of the day a roadside bomb in Iraq ripped apart the Humvee he was riding in. "I call it my 'alive day,' " he said. (Patricia McDonnell for The Boston Globe)
Email|Print|Single Page| Text size – + By Scott Allen Globe Staff / April 6, 2008

Even when Brian Fountaine was lying face down in the Iraqi dirt, his lower legs mangled and bleeding from a roadside bomb explosion two years ago, he knew he was going to survive. The young tank commander also knew he was about to become a double amputee.

But what Fountaine could not have imagined was the overwhelming support he would get when he returned to the United States from the strangers who buy him dinner at restaurants to the pen pal who helped nurse him back to health and now plans to marry him. Last night, a Taunton-based charity gave Fountaine his most visible show of support: a new house in Plymouth designed with wide doors and open floors so he can get around easily even when using a wheelchair.

"It's an indescribable feeling being 26 years old and owning your own house," said Fountaine, who moved into the house with his fiancé, Mary Long, two weeks ago, but officially received the deed from the group Homes for Our Troops at a gala dinner last night. "It's a lot of weight off my shoulders."

Over the past four years, Homes for Our Troops has provided houses for 25 disabled veterans and their families, and it plans to build another 100 in the next three years. Founder John Gonsalves concedes that's not enough for the roughly 2,000 veterans who need handicap-accessible homes, but he's amazed at the rapid growth of an organization that started in his basement office: Billy Joel donated the revenues from his latest song, "Christmas in Fallujah," to Homes; President Bush has publicly praised the effort; and the group just received its biggest donation, an anonymous $10 million gift.

"It's really a testament to how many great people there are in our country," said Gonsalves, a former contractor and now full-time philanthropist. He estimates that his group spent no more than $40,000 to build Fountaine's home because so much of the labor and materials, as well as the land, were donated.

Fountaine and seven other disabled veterans planned to tell guests at last night's dinner at the Marriott Hotel in Quincy how Homes for Our Troops has changed their lives, including one Army sergeant who has to use an electronic voice simulator because of a brain injury.

To Fountaine, the new house almost completes a transformation of his life that began when he returned from Iraq to convalesce at Walter Reed Army Medical Center in Washington, D.C.

By coincidence, Long, with whom he had corresponded over the Internet while in Iraq, already had planned a trip to the capital when she learned that Fountaine was hospitalized there. She intended to visit for a couple of hours, but ended up staying all day, Fountaine said, then temporarily relocated from her home in Kansas City to Washington so that she could be with Fountaine as he learned to walk with prosthetic lower legs.

He walks naturally now and wears shorts or pants with zippers on the inseam so that he can easily adjust his prostheses. He has installed flashlights 3 feet from the floor in every room of his new house so he can find his way out easily if he's ever alone in an emergency, and doesn't have the five to 10 minutes required to attach the prosthetics. He has begun working as a carpenter with his father, and plans to take courses at Cape Cod Community College.

But Fountaine's new life will be complete June 8, his wedding day.

The date is the anniversary of the day the roadside bomb ripped apart the Humvee in which Sergeant Fountaine was riding.

"Some guys look at it as the worst day of their lives. I actually celebrate on that day. I call it my 'alive day,' " said Fountaine.

One other benefit: "I'll never forget my anniversary."

Scott Allen can be reached at allen@globe.com