THIS STORY HAS BEEN FORMATTED FOR EASY PRINTING
Brighton 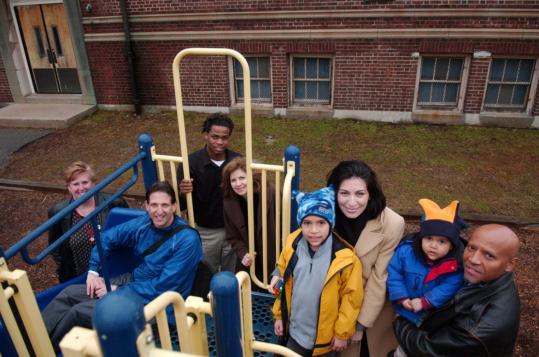 Donna Sullivan of the Oak Square YMCA, Tom O'Brien of the Presentation School Foundation, Marvin Neal of Little Sprouts, Jeanne Hopkins of WGBH, and Priscilla and Marcelino Cardoso of the foundation, with sons Lucas (left) and Lucio. The group is working on plans for a preschool. (Patricia McDonnell for the Boston Globe)
Email|Print|Single Page| Text size – + By Andreae Downs Globe Correspondent / April 6, 2008

The building remains as it was when it was purchased from the archdiocese for $1 million in 2006 - aging classrooms, asbestos, brickwork in need of repointing, ancient boiler, original plumbing.

But now there's a tenant for the Our Lady of the Presentation School building. And the target move-in date is a little more than a year away.

The board of the nonprofit Presentation School Foundation last month laid the programmatic foundation for what it hopes will become a haven for families with young children in Oak Square.

They have netted Little Sprouts, the early childhood education provider, as anchor tenant for the first floor, with partners WGBH and Wheelock College linked in to create a lab school for as many as 140 children ages 1 month to 6 years.

"Our vision from the beginning is finally coming together: that kids will be running around Presentation School again," said Tom O'Brien, the foundation's president. "I can't wait to go to local families and say, 'The epicenter of early education nationwide is here for you.' "

If fund-raising continues apace, the building may be occupied by summer 2009, he said. Late last year, foundation estimates to refurbish the roughly 100-year-old structure ran around $3 million, with $180,000 being raised from the community. The bulk of the funds is expected to come from private donors and government agencies.

By forming partnerships and occupancy plans first, O'Brien said, the renovations can be tailored to accommodate tenants' needs.

"We will be actively involved in the layout and size of classrooms" in the renovated school, said Jessica Todisco, spokeswoman for Little Sprouts. The organization has seven day-care and preschool sites, mostly in the Merrimack Valley, and has plans to expand nationally.

Little Sprouts will also have some say on playgrounds and the gymnasium, where children will run and tumble in bad weather.

In the evening, the gym could be the neighborhood spot for yoga classes or pick-up basketball, or a location for celebrations on weekends.

The foundation is looking to serve entire families, not just their babies and toddlers.

"Allston-Brighton is facing the question of how to convince young families to become rooted here," O'Brien said. "The first step is support from when kids are born."

Most of the families that volunteer for the foundation will not use the early childhood resources, O'Brien said. But they are interested in boosting owner-occupancy rates in a neighborhood that has a growing student population - second only to the Fenway among city neighborhoods.

"None of us has small kids or need adult education," he said. "But we want a compassionate, vibrant community. And we're going to get it done."

Among the offerings that the foundation, WGBH, and Wheelock are exploring for the center are adult education, job readiness, and children's out-of-school programs.

"We hope this will pull the neighborhood together, because we have no walk-to schools," O'Brien said. "The point is to do it with excellence."

The foundation's concerns are echoed by its partners.

WGBH, headquartered on Market Street, is interested in bringing its nationally recognized programs to its backyard and testing research-based curricula.

While its "Between the Lions" literacy and "Peep and the Big, Wide World" science curricula are already used at other Little Sprouts locations, having Wheelock and other universities available to train teachers and assess results is particularly valuable, said Mary Haggerty, the station's educational outreach manager.

Wheelock is also interested in the extended programming of the future center.

"We're interested in how early childhood programs and other services can lead to better support for families," said Gwen Morgan, professor emeritus in public policy and early childhood at Wheelock. "This could be a model of community planning."

The result could be an economic boon to Brighton and the surrounding area, she said.

"This will not just be a program for children. It will be a place people work, get training for jobs, and get connected to health services and other things children need. The economic data on that is overwhelming."

Leona from Between the Lions will be part of a children's celebration of the partnership at the Oak Square YMCA at 2 p.m. April 16.