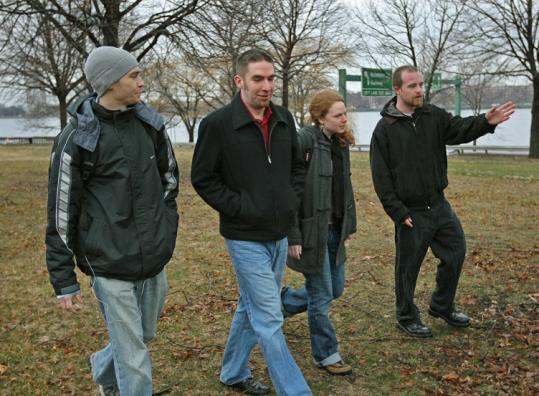 Engineering students (from left) Matthew Volovski, Tony Coward, Kelly Chromley, and Joshua Barnett designed a walk along a route by Storrow Drive in Boston along the Charles River, where a park will be opened to the public. (David L. Ryan/Globe Staff)
Email|Print|Single Page| Text size – + By Noah Bierman March 30, 2008

The plan for Boston's long-awaited bicycle trail may be incubating right now in a Northeastern University engineering lab.

In their plans, they're knocking down rotaries, envisioning foot bridges over busy intersections, and reconfiguring traffic signals to let cars and bicycles move faster without clobbering one another.

Freedman is counting on the senior civil engineering students to save the city some money by testing out and designing plans to merge some of the trickier gaps in the city's trail system.

And Herbert Nolan, who works for the Solomon Fund family foundation, said he is likely to use the students' plans as the basis for further professional studies he expects to commission. Nolan is working with the city and state to use those plans to attract public money to build some of these projects for Boston's cycling community.

"These guys are knocking themselves out to make believers of us," Nolan said.

During an interview at Northeastern on Thursday, Matt Volovski, a 23-year-old student from Seymour, Conn., pulled out a large map drawing with red lines marking the pathways created by him and three other members of his student design team. The group had one of the tougher and more significant challenges: creating a link between the Back Bay Fens and The Charles River, connecting Olmsted's Emerald Necklace with the Esplanade.

First, Volovski pointed out how tough it is to cross Boylston Street to get onto the Bowker Overpass.

Kelly Chromley, 22, led the traffic counts and figured out that changing the traffic light cycle would not create a backup of cars.

"If anything, it's gotten better" with the changes, Volovski said.

He and the team meandered up the road (on the map with their fingers) through a wheelchair-accessible ramp and a newly painted crosswalk. Along the way, they have reconfigured some wide car lanes to create enough space for cyclists and walkers on the street without losing traffic capacity. They are considering a sound wall next to the Storrow Drive onramp.

Then Volovski got to 2 1/2 acres of trees that many people pass by without ever noticing. In fact, it's a park designed by the father of landscape architecture, Olmsted, and now overshadowed by the Bowker Overpass.

"We have this beautiful parkland that's completely underused," Volovski said.

He and Chromley, along with Joshua Barnett and Tony Coward, have spent a lot of time in the park and report that, despite all the traffic around it, it is quiet.

Chromley pointed out that the link they have created would excite Sunday cyclists who want to travel across the city's park systems and commuters who use a bicycle to get from Cambridge to Back Bay and want a fast path that doesn't require dodging Boston's scary drivers.

Their teacher, Peter Furth, consulted with Freedman, who has been in contact with the students, as he choose the assignments. One of the things he wants his students to learn is how to navigate political opportunities. This is one.

Furth said funding for paths is a catch-22: You cannot get grant money without a design, but you cannot create a design without money. The students, who work for free, are providing a design in hopes of sparking interest to attract more money.

"The mayor did commit to doing several miles of bike lanes and the lanes they looked at were ones that our initial study showed are probably feasible," said Freedman.

All six of Furth's design groups plan to present their projects to the public April 22 at the Snell engineering building on Northeastern Campus.

Please send complaints, comments, or story ideas to starts@globe.com. The column can be found at boston.com/starts.