No longer lost in translation 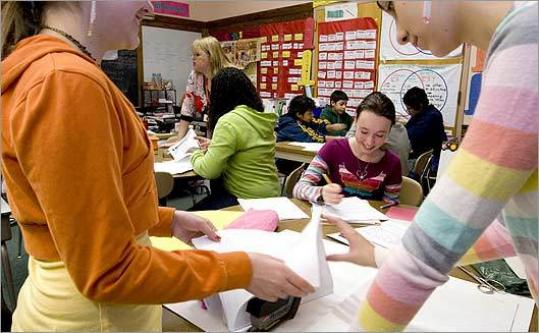 None of her fellow students teased Maria Smolina, 13, just because she had to sound out simple test words, or because she confused her pronouns. They didn't think it unusual that she still can't get used to the taste of peanut butter or macaroni and cheese.

Inside this classroom at Milford's Stacey Middle School, filled exclusively with "English language learner" students, Smolina was enough at ease to share an essay she wrote about her arrival in the United States two years ago.

"My mother wanted to give me a better life, so she wrote a personal ad that was translated on the Internet, on a Russian brides website," she said.

Smolina is one of about 200 students attending the Milford school system's redesigned program for newcomers to English. Out of its total enrollment of 4,200 students, Milford has the largest number of English language learner, or ELL, pupils of any district in the Blackstone Valley.

The initiative, which puts recent immigrants like Smolina at ease inside self-contained classrooms, will be put to the test over the next week, as Milford joins schools across the state in administering the English language arts segment of the Massachusetts Comprehensive Assessment System exams.

For the first time in years, students such as Smolina are poised to receive a passing grade on the English language arts segment of the high-stakes standardized tests.

Since it started altering the way English is taught to immigrant students just two years ago, the Milford district has shown improved test results and received praise from state officials and ELL directors in other communities, some of whom now use methods from the Milford model.

"Milford was a district that has experienced rapid growth in English language learners," said Jonathan Considine, external relations coordinator for the state Department of Education.

Last fall, the Milford system was removed from the state's list of schools scoring poorly on MCAS and in need of improvement; under the federal government's 2001 No Child Left Behind Act, one more year on the list would mandate that the state take corrective action.

Between 2004 and 2007, the share of Milford ELL students showing adequate progress on the MCAS rose from 61 percent to 68 percent in English language arts, and from 49 percent to 68 percent in math. This month, for the first time in years, Milford's ELL students also passed a second test required under the No Child Left Behind Act, called the Massachusetts English Proficiency Assessment.

"Milford has a very good ELL director, Ann Feldman. And it has focused on . . . developing an ELL curriculum," Considine said. "In addition to training its content teachers to work with English language learners, the district has taken on the issue of directly teaching English to these students."

"I made changes to the English language learner program because as I became more familiar with new state regulations, I wanted to ensure students were receiving enough ELL instruction," said Feldman.

The district's successes have other area schools looking to Milford for advice on how to sharpen the English skills of immigrant students.

In 2006, Feldman launched a support group for schools that have a small number of English language learners but still have to follow state and federal ELL teaching mandates.

"Ann Feldman's an incredible lady. She has basically been giving us almost a course in how to work with English language learners and English language education as the state wishes it to be done," said Priscilla Arbuckle, coordinator of the Mendon-Upton regional district's program.

Last June, Feldman was also one of four educators who established the Massachusetts English Learner Leadership Council, a group that now comprises more than 50 school districts, including Boston and Worcester, sharing information about advances in curriculum and educational practices.

In 2006, the Milford program hired a handful of new ELL teachers, and now has a total of 13 - representing a higher per-student ratio than most school systems, Feldman said. It also started requiring new students like Smolina to attend ELL-only classes.

"The self-contained classroom is a safe place for students to start out in," said Smolina's teacher, Reeny Abramson. "Here, the students aren't afraid to make mistakes. They can be themselves. When it's someone's birthday, we sing 'Happy Birthday' in seven different languages," matching the backgrounds of this year's class of seventh-graders, she said.

Across the district, 15 languages are spoken.

This year, Milford also began training its mainstream teachers in ELL educational techniques, so they can help students like Smolina as they are gradually introduced to conventional classrooms. Smolina has already been placed in one mainstream classroom: math.

"At first, I was scared I'd not be good enough," Smolina said. "Then I sat next to an American girl, Chloe Morgan. Now she helps me sometimes and I help her sometimes."

Abramson reminds Smolina that she's at the top of her math class, and the girl's face reddens. Then she smiles when Abramson talks about another ELL program that Feldman is planning to implement, a parent information center where her mother could learn about American culture and language.

"Now I know more English than my mother," said Smolina. "But when we first moved here, my mother had to translate everything for me."

"I know in eighth grade I'll be recommending that she exit the program."