N.E. wildlife officials warn that providing food for deer may have dire consequences 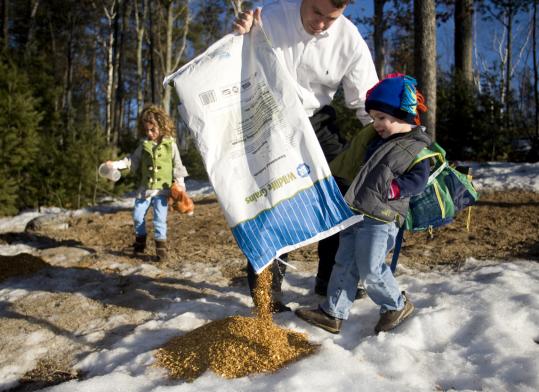 The people of Lincoln Plantation, Maine, have no illusions about their winter deer-feeding program: They know state wildlife officials do not approve.

But that has not stopped the tiny township of 40 people, near the New Hampshire border, from buying and dumping grain in several locations for deer to eat, especially at the tail end of a hard, snowy winter like this one.

"We really shouldn't be feeding them; but the more they tell us not to, the more we do it," said Muriel Potter, longtime town clerk. "You don't fool around with Mother Nature . . . but we do."

Maybe it's the tender memory of Disney's Bambi. Maybe it's the magic reindeer pulling Santa's sleigh. Or a longing, in a concrete world, to stay in touch with nature. Whatever the reason, this time of year across New England, even animal lovers who know better find it hard to resist feeding deer.

State wildlife officials say they understand the sympathetic instincts of backyard nature-watchers, who see lingering snow banks and deer that may look starved and thin. But they warn that feeding deer has potentially dire consequences, encouraging the spread of disease and putting animals at heightened risk. One New England state, Vermont, has banned residents from feeding deer. Others have launched aggressive education campaigns.

"We all have emotional ties to animals, and when you see 4, 5, 6 feet of snow outside the door, it's an incredibly bad year for deer," acknowledged Lee Kantar, deer biologist for the Maine Department of Inland Fisheries and Wildlife. "The difficulty is convincing people that what they're doing may not be beneficial. It's an uphill battle."

Whitetail deer face a dramatically reduced supply of food in winter and survive by eating and roaming less and relying on fat stores, Kantar said. They gravitate to naturally sheltered areas, often with tree cover, that protect them from the harshest winds and snowfall, where they "hunker down and wait things out," he said. But if the deer are attracted to food put out by people down the road, he said, they will use up extra energy to travel back and forth and may be more susceptible to accidents with cars because of their increased mobility.

The food offered at manmade buffets may be even more dangerous. Deer cannot adjust quickly to changes in diet, biologists said, and two potentially fatal conditions, acidosis and enterotoxemia, can be caused by sudden overloads of carbohydrate-laden grains or corn.

"Giving them corn is like feeding your kids ice cream all the time," said Shawn Haskell, chairman of the state deer team for the Vermont Department of Fish and Wildlife. "Thousands of deer die in the West from eating hay, because they don't have microbes to digest it."

Moose are rarely fed by people, because they keep their distance. But last month in Rochester, Vt., a sick moose that became disoriented and lingered in a well-populated neighborhood died in part because residents fed the animal bananas, oranges, and doughnuts, said Colonel Robert Rooks, director of the law enforcement division of the Vermont Department of Fish and Wildlife.

Residents who put out food for deer may also foster breeding grounds for illness. Chronic wasting disease, a fatal ailment that has decimated deer populations elsewhere, has not turned up in New England, though it has been found in New York. By drawing large groups of deer to the same small areas, where their fecal matter may mix with their food, backyard feeding stations increase the chances the disease will spread.

Officials in Vermont were so concerned about the risk they passed a law against feeding deer in 2005. Other states, including New York and Virginia, have also banned deer feeding. A similar measure was proposed in Maine last year, but proved too controversial.

In Rangeley, Maine, where such feeding is widespread, state wildlife officials put up new signs last year explaining why feeding deer is not a good idea. But when people have fed deer for years, Kantar said, they fear that if they stop, the animals dependent on their help will die.

That fear is one reason nearby Lincoln Plantation has not stopped feeding its deer, said Potter, the town clerk. She said the tradition dates to the 1960s, when a local restaurant put an empty pickle jar on the counter to collect donations for the "feed-the-deer fund," and residents began flocking to the roadside to watch the deer eat on Sunday afternoons.

Kevin Fredette has been feeding deer in his backyard on the edge of Nashua for three years, starting in early March and continuing until the snow melts. Splitting the costs with a neighbor, he said they spend $300 to $500 each year on 50-pound bags of feed to dump at the edge of the woods. The reasons are twofold, he said: To prevent the deer from eating his shrubs "and because I can't stand to see an animal starve to death."

The costs are well worth it, when a dozen or more deer are cavorting on his lawn, Fredette said. "It's the alertness and cleverness," he said of their appeal. "Everyone who comes to see them is in awe. It's nature at its best, in the middle of Nashua."

A former hunter who gave up the hobby, Fredette said he knows that state officials frown on what he's doing.

But he doesn't see the harm. "It's intriguing to help out Mother Nature, when Mother Nature needs a hand," he said.