World-class bike cities? Why not Boston? 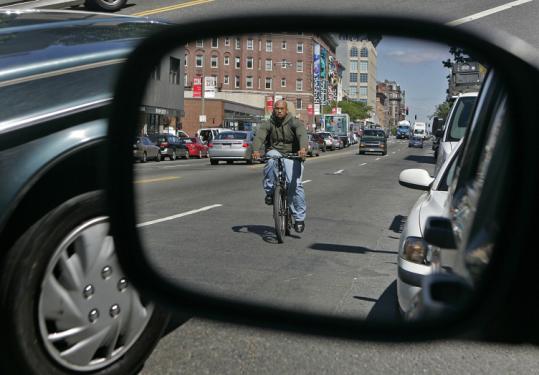 Riding a bicycle can be a dangerous sport in Boston, a city that has been rated among the worst in the country for cyclists. (David L. Ryan/Globe Staff/File 2007)
Email|Print|Single Page| Text size – + By Ethan Gilsdorf March 23, 2008

Boston? Not yet. Three times Boston was named to Bicycling magazine's list of the worst US cities for bicyclists, most recently in 2006.

Local roads may have given bicyclists the cold shoulder, but many advocates have hope for a friendlier future.

Welcome to Shifting Gears, a regular column that will follow Greater Boston's path toward this goal. We'll keep our eye on policy and progress, and also take some detours along the way to explore the daily joys and hassles of pedaling around this city.

On the plus side for cyclists, Mayor Tom Menino last fall appointed a biking coordinator, charged with making Boston more hospitable to bikes.

New statewide highway design regulations include a higher priority for bikes. Groups and blogs, from Bikes Not Bombs to bostonbiker.org, are proof of an active biking community.

Why should you care? Because biking not only helps ease traffic congestion, but also is part of the solution when it comes to parking, obesity, climate change, and social interaction. It's a player in making Boston - and surrounding communities - more livable.

"What's great about Boston is that it has enormous potential," said Nicole Freedman, the city's new director of bicycling programs. "It's compact, very dense, has a young population and a thriving subculture of cycling."

Boston may have a long way to go, but other cities have already made the climb. Copenhagen, a city that's like ours in size, layout, and climate, had no cycling culture to speak of 30 years ago. But since the 1970s, an effort to convert streets into pedestrian thoroughfares, gradually reduce the number of parking spots, add bike lanes, and encourage inner-city residency has reduced those increasingly costly SOV (single occupancy vehicle) trips.

Copenhagen turned itself around. Now 35 percent of its workforce bikes to work. By 2015, the city wants cyclists to make up half of all commuters. I've been to the Danish capital; there's nothing like bar hopping by bike.

Even Parisians, known for neither their athletic prowess nor their willingness to muss up their hair, have embraced the "vélo." I lived in Paris from 1999 to 2004 and saw how with the backing of a strong mayor (hear that, Menino?), a chaotic city with narrow streets (think Boston's bovine-planned grid is a mess?) installed kilometers of bike lanes and introduced fleets of cheap rental bikes throughout the city.

Locally, Cambridge is a model city making huge headway toward the same end. A 1992 "Vehicle Trip Reduction Ordinance" has decreased SOV travel. Mass-transit use is up, and from 2002 to 2006 Cambridge saw a 70 percent increase in its numbers of cyclists. Prevention magazine just named it the best US walking city.

Cambridge is bike-friendly, and it didn't take brain surgery or deep pockets to make it happen.

"Most of what we have done is not high-cost items," said Cara Seiderman, transportation program manager for Cambridge. "It's more that the city has made a commitment to bicycling and walking and public transit, and sees those as fundamental to creating livable cities."

In Boston, a groundswell of regional activity shows biking advocates, transportation and urban planners, and elected officials are finally all on the same page. Or, on a similar page. Well, at least they're reading the same book. More or less.

"The energy and collaboration between advocates and government has been much stronger and much more energized over the past few years than it has been in a long time," said Jeff Rosenblum, president of the Livable Streets Alliance. "The state government has been talking about improving bike access, the City of Boston has launched this great new program that has a commitment from the mayor's office, and there is lot of good communication with the advocates."

And bikers can be enthusiastic. A recent squall of Boston Critical Mass postings about cyclists running red lights - comments ranged from "you're supposed to obey traffic signals like a motor vehicle" to "I was in no danger of hitting the poor little pedestrians" - reminded me that our most ardent gearheads are both passionate and a part of the solution. (We'll get into traffic laws later. And a whole slew of other sticky wickets.)

Already, the diehards will bike no matter the conditions.

Through progressive policies and infrastructure spending - bike paths, bike lanes, bike racks, etc. - Boston can also reach what Freedman calls "those who have a bike in their basement but don't use it." Americans own 150 million bicycles, according to the US Department of Transportation. Everyone was a biker at one point. "We're not targeting cycling," Freedman told me, "we're targeting people."

In this column, I intend to explore all things biking - commuter, racing, or recreational - in our fair city and environs, from surface streets to the Charles River path to the Minuteman trail. Sometimes my focus will be personal, sometimes political, sometimes practical.

Have news to share or an event to announce? Got a location for a bike path or bike rack? The path you travel full of ruts? I want to hear from bikers in Boston and beyond. Send your feedback, and tips for me to investigate.

Send comments, bike news and events, and ideas for future columns to ciweek@globe.com.