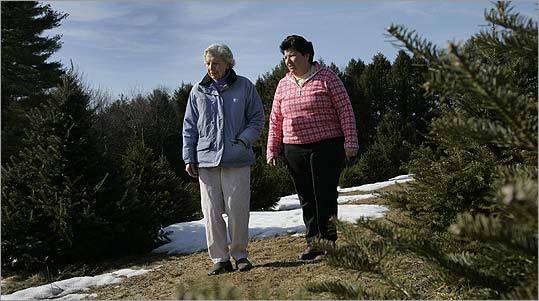 A recent study conducted by the University of New Hampshire confirms what curmudgeons in these parts have been complaining about for a long time: The Granite State may be turning into a suburb of Boston.

The report, "The Changing Faces of New Hampshire: Recent Demographic Trends in the Granite State," released last month by the Carsey Institute at the University of New Hampshire, indicates that nearly 25 percent of New Hampshire residents were born in Massachusetts, and Internal Revenue Service data indicate that the largest source of new migrants to New Hampshire is Greater Boston.

According to the report, 57 percent of the current population of New Hampshire were born outside the state. The national average is about 40 percent.

"I was surprised at the turnover," Kenneth M. Johnson, the author of the report, said last week. "Everyone thinks of New Hampshire as such a quaint, stable state, but only seven other states have fewer residents born in state, and those are states you'd expect, like Florida, Nevada, and California."

The report states that the majority of the migrants moved to the southern tier of the Granite State, which appears to be becoming part of the "peripheral sprawl of the Boston metropolitan area."

The mountains and the Lakes Region also attracted a large number of migrants, the majority of them retirees.

"So much of New Hampshire's population growth is because of domestic migration - from within the United States," said Johnson, who has a doctorate in sociology and demography. "That's a sharp contrast to Massachusetts, [which is] losing lots of domestic migrants, yet gaining through immigration."

Dr. Joseph Dulac and his wife, Michelle, are among those who moved from the Bay State to the Granite State.

A family practitioner, Joseph was raised in Chelmsford. Michelle was raised in Lowell. The couple lived in the Portsmouth area for a year before moving to Dover about five years ago.

An avid skier, he said his family also enjoys the region's proximity to both the seacoast and the mountains.

"The environment is also a little more friendly and it's a nice place to raise children," he said. The Dulacs have two children, ages 4 and 5.

"It's a small-town atmosphere, a quieter way of life with a slower pace that allows you to get to know people very well," said Michelle, who is a homemaker.

"It's a different way if life, without the hustle and bustle of Boston," she said. Another draw is the lower cost of living, with no sales or income tax.

According to the UNH study, New Hampshire gained 37,500 migrants from the rest of New England over the last six years. And there has been no substantial increase in minorities.

In 2006, New Hampshire was 93.7 percent non-Hispanic white, according to the report, making it one of the least diverse states in the country.

The most populated counties in the state - Hillsborough, Rockingham, and Strafford - account for 62 percent of the state's population.

Abby Tonry, a member of the Hampton Falls Planning Board for 19 years, moved from Wellesley to New Hampshire in 1964, when she was 8 years old, making her a longtime observer of New Hampshire's changing demographic.

She tells glorious stories of growing up in the fields and forests of Hampton Falls, where she and her family own and operate a Christmas tree farm. But she said the rural life is quickly becoming a thing of the past.

"The area is being built out, particularly in the last five years," she said.

"When I was growing up, the town had three dairy farms, a couple of chicken farms, and two large apple orchards - and they've all become subdivisions."

She said the average price of a house lot in Hampton Falls is $300,000, and small-property owners are feeling the pressure. "They constantly get letters from developers asking if they'd like to subdivide their property. People with little plots of land can sell for a million bucks, and that's hard to turn down."

And, she said, the recent migrants are different. "Everyone moves here because it's quiet and quaint, but the next thing you know, they want sidewalks, street lights, and soccer fields."