N.H. teachers with a bit of pluck will board a NASA craft to conduct a zero-gravity experiment designed by their students 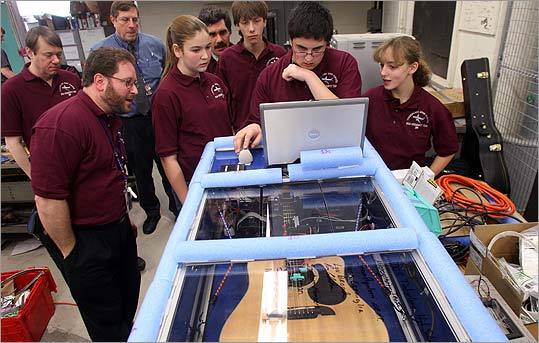 PLAISTOW, N.H. - This story involves a guitar-plucking robot, a jet nicknamed the "Vomit Comet," and four Timberlane Regional High School teachers floating weightless in restricted airspace over the Gulf of Mexico. But it's not some twisted comic book or a lost episode of "Heroes."

Timberlane science teacher Steve Rugoletti said the tale began when he became one of 200 finalists for NASA's teacher-in-space program. He didn't get the nod to fly the space shuttle, but he did earn a chance to bring an experiment aboard NASA's reduced-gravity plane. The students of Timberlane's newly created NASA Microgravity Team 2008 came up with a plan to test the effect of zero-gravity conditions on the vibrations of a guitar string.

Rugoletti and fellow Timberlane science teachers Mark Cerniglia, Lou Broad, and Ron Edmiston left for Texas last week. They'll have several days to uncrate the experiment built by students as well as train for the flights, which will take off from Ellington Field near Houston. Rugoletti had to shave his beard to accommodate a military-style oxygen mask. He and Cer niglia will fly on Thursday, the other two on Friday.

"My mom wasn't too terribly worried. She was more worried about me getting back so I can take my cat home," Rugoletti said a few weeks before departing.

But just last week she found out he was flying in a real plane, not a simulator as she had thought. She wasn't too thrilled, Rugoletti said Tuesday.

"My wife's not too excited about me leaving, but she knows it's a once-in-a-lifetime opportunity," said Cerniglia, father of two young children.

"My insurance is paid up," Edmiston said with an unworried smile.

The converted DC-9 jet is the latest in a series of Vomit Comets used to train astronauts, expose politicians and others to the feel of zero-G, and even film scenes for the movie "Apollo 13." It simulates abnormal gravity conditions by flying a series of parabolic curves, like a giant taxpayer-funded rollercoaster. Steep 500-mile-per-hour climbs that double the force of gravity are followed by equally precipitous plunges. As the plane drops at least 10,000 feet, for 23 seconds those inside it experience zero-gravity conditions. It will happen perhaps 20 times each flight.

The National Aeronautics and Space Administration's manual says as many as 60 percent of those on hand will feel nausea or worse, hence the nickname. But as the plane goes up and down, the teachers should be able to repeat the experiment numerous times.

"It's designed so that theoretically when we're in flight and we're in zero-G, or when we're in hyper gravity, two G's, on the way up, all we have to do is press that one button," Edmiston said cheerfully. "So we can press the button, throw up as we need to, and press that button again, and so forth."

Plaistow's Northstar Music Center, on Route 125 near the school, arranged the donation of an acoustic-electric six-string guitar from the Alvarez company. It has a particular kind of built-in pickup - a piezo crystal - that will serve as a key link in the experiment's data collection chain. Working for more than two months with an extensive set of requirements from NASA, students Anthony "Nino" LoConte, Cody Jones, Rachel Nadler, and Kati Orban designed and built a package that uses bungee cords to secure the guitar in a Lexan-and-aluminum case, like a glass coffin.

With one press of a button on a joystick, a small device the students built from a fischertechnik robotics kit - "It's like Legos on steroids," said Nadler - swings a tiny robotic arm holding a standard guitar pick. The guitar pick plucks the E string, and the piezo pickup conveys the musical vibration to a Dell laptop computer that records and displays the results and can compare them with the string's normal vibration.

That's the simple version. By a long shot.

Ultimately, the experiment is less to help Eric Clapton tune up should he ever play the International Space Station than it is to learn something about vibrations in zero-G environments that could be applied to regular components of spacecraft. There also will be plenty of chances for the students and teachers to show off their work in class and at various educational gatherings in the months to come.

"Nino had the greatest quote of all," Rugoletti said. "Nino says, 'This is so cool. Not even the teachers know what is going to happen.' And that's what real science is."

"High school students in general . . . don't get the opportunity to do true science, where the outcome is unknown. And this is one of those situations," said Rugoletti.

Of course, the students did so much of the work, but only the teachers are getting to fly. Isn't that annoying, kids?

"Yeah, kind of," Orban said with a laugh.

"I wish we could go down there and just experience NASA," said LoConte.

"Just to be there and hang out and see all the cool stuff and the shuttles and stuff," said Jones.

"Remember watching all those shows on Nickelodeon? The grand prize was space camp? Why can't we just go to space camp while they're doing our experiment?" LoConte added.

It's an irony that makes the young engineers sigh, but there are reasons.

"We're expendable," said one of the teachers.

"Children are not," added Rugoletti.