Outlines visions in five other areas 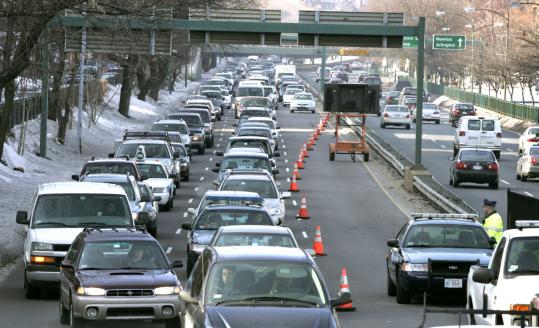 Mayor Thomas M. Menino outlined his vision yesterday for another greenway in the heart of the city, this one a miniature version on the bank of the Charles River.

In a speech about ways to preserve the character of the city's neighborhoods while encouraging billions of dollars in development, the mayor said the state should build a 100-foot-wide greenway over part of Storrow Drive.

"Think about this for a minute," he said, speaking to business leaders at a South Boston hotel. "We can reopen the riverfront to residents, connect the Charles River and the Public Garden, and create more green space in the heart of our downtown neighborhoods."

Unlike the Rose Kennedy Greenway, which was sited on top of the Big Dig project, the new greenway would require no new tunnels, city officials say. Instead, a wide deck would be built over part of the road and planted with greenery.

The state, which owns the major thoroughfare, is now deciding how to repair the Storrow Drive tunnel, which currently encloses one lane of the roadway near where the mayor wants a greenway.

"While the discussion to this point has focused on which plan causes the least inconvenience, I am calling for everyone to take a big picture view, to see past the problems and see the full possibilities," Menino said.

The announcement surprised officials at the state Department of Conservation and Recreation, which oversees the Esplanade and Storrow Drive corridor. The department's commissioner, Richard K. Sullivan Jr., said in an interview after Menino's speech that the agency is focused on immediate tunnel fixes needed to ensure public safety.

"The interim repairs will buy us a number of years to have the larger discussion with all elected officials and the public about the Storrow Drive tunnel, specifically, and the larger Charles River basin," Sullivan said.

State representative Martha M. Walz, who represents Back Bay and Beacon Hill, said she also had not been informed of Menino's proposal.

Walz has been inundated in recent months with complaints and concerns from neighborhood residents and park advocates over the state's existing tunnel-repair project.

"I look forward to getting additional information and adding the mayor's ideas to the planning work that has already been done for the future of the Esplanade," she said.

Menino, who is less than 18 months from being the longest-serving mayor in the city's history, also used his speech at the annual meeting of the Boston Municipal Research Bureau to outline visions for development in five other areas of the city.

Along the Rose Kennedy Greenway, the parkland covering the Big Dig, the mayor called for limits on building heights to ensure that the new greenspace is not left in the shadows. "We have spent a lot of money to take the cars out of this corridor," he said. "I will not allow development to take the sun out, as well."

In Allston, on patches of land that are now crisscrossed by railroad tracks and Massachusetts Turnpike ramps, the mayor said he envisions a cluster of life-sciences developments that spur job growth and enliven the neighborhood. "Our goal is not another industrial park like Kendall Square, but a neighborhood more like Harvard Square, a center of city life bustling with activity and commerce," Menino said.

He said the city will invest more in the Newmarket Square section of Dorchester, repairing sidewalks and lighting, expanding off-street parking for employees, and developing city-owned parcels near the Southeast Expressway and Melnea Cass Boulevard.

In South Boston, Menino said, the city is moving forward with plans to relocate City Hall to Drydock 4 on the waterfront. In Dudley Square in Roxbury, the city is making progress on construction of a 200,000-square-foot building that will house several city agencies. "Although the credit crunch may be slowing the national economy, Boston is still driving ahead," Menino said. "Our development pipeline contains $12 billion that's with a B of investment. In fact over 60 projects are under construction right now in our city, totaling 14 million square feet.

Samuel R. Tyler, president of the Municipal Research Bureau, a business-funded city watchdog group said he was encouraged by the mayor's vision, even the one that includes a greenway over Storrow Drive.

"It looks like there's an interest on the part of the mayor to develop an overall plan and have developers come in under those guidelines," Tyler said. "That hasn't always been the case in Boston, where the city has at times dealt with each development on a case-by-case basis, rather than on how they complied with an overall plan."