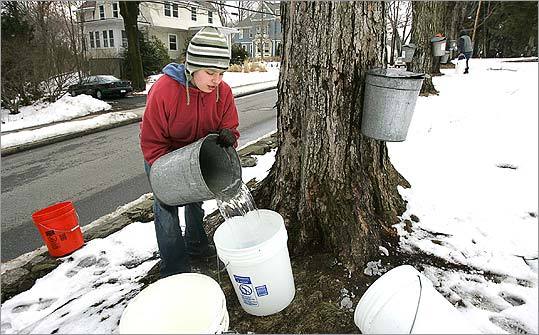 The stately sugar maples that once lined roads in Natick are isolated sentries now, standing in clusters of three or four with long gaps in between. Planted as shade trees in the 19th century, they find themselves casualties of the very roads they overlook. In modern times, the salt used to deice local roads has killed a number of the roadside trees, and others were felled as roads were widened and once-undeveloped plots were built upon.

Timothy Perkins, director of the University of Vermont's Proctor Maple Research Center, said road salt is one of the major causes of damage and decline in roadside sugar maples.

"Sugar-maple trees are fairly sensitive to salt. It does damage the roots, it does affect their ability to take up nutrients, and that can kill trees," Perkins said. Sugar maples are more likely to have roots close to the road surface, he said, and, therefore, are more susceptible to damage by snowplows, accidents, and construction.

The loss has led the Natick Community Organic Farm, which has long relied on the publicly owned trees, to essentially borrow trees to maintain its maple syrup production. The town-run farm has expanded its appeals to private-property owners asking for the use of their trees.

Fortunately for local lovers of maple syrup, homeowners have been eager to cooperate. Five new participants volunteered their trees this year.

Farm director Lynda Simkins said the farm has always tapped some privately owned trees, but as large numbers of sugar maples were lost, expanding the supply of possible tap trees became more important. The program avoids tapping the same trees each year, giving them a chance to recover for a season before drawing sap from them again. That means the overall supply of trees has to be larger than the number actually used each year.

Ten homeowners are participating this year, each loaning the use of between five and 12 trees. Last year, about the same number of homeowners took part. Other collection sites include the Dana Hall School in Wellesley, the Walnut Hill School in Natick, Pine Hills Cemetery in Sherborn, and Elm Bank Reservation on the Sherborn-Wellesley border.

Syrup is relatively big business for the small farm, accounting for between $12,000 and $15,000 of the revenue it gets each year from selling agricultural products. The highlight of the season is an annual pancake breakfast, this year scheduled for Saturday from 8 to 11 a.m. at Natick's Memorial School. The breakfast and presentations held later in the day attract about 3,000 people, Simkins said.

The maple syruping program first began in 1980, Simkins said, when she and volunteer George Ames tapped about 200 buckets of sap. This year, between two dozen and three dozen volunteers will collect about 600 buckets.

She acknowledged that at first she knew next to nothing about making maple syrup. Ames, who has died since, taught her what he had learned over the years, and she improved on it through trial and error.

"It is a true Yankee enterprise," Simkins said of the days of toting heavy buckets and long nights of watching sap boil. "You work hard, but you're sitting there a lot. You're sitting there and thinking, 'I could do this better if I moved this a little higher, the sap would run better . . .' "

Jed Beach, the farm's assistant director, grew up making maple syrup on his parents' homestead in Maine. Despite the heavy pails and high probability of being slightly sticky by day's end, he said, volunteers of all ages have been drawn to the farm each sugar season.

"This is a really community-gathering event. People love to collect sap," Beach said last week as he took a break from emptying buckets of the clear, watery, slightly sweet liquid into a collection tank on the back of a pickup truck. "You build muscle, and you can watch the tank filling up. People like the physical work and the feeling of teamwork it creates."

The story of maple syrup actually begins in the fall, as temperatures drop and the trees begin storing nutrients in their roots as starch. During winter, they're dormant, "like bears," Simkins said.

As the days get longer and warmer, the starch is converted to sucrose, which is dissolved in the trees' sap. The sap is pulled up from the roots and travels through the trunk and branches. When the daytime temperature hovers around 40 degrees and the weather is sunny - usually near the end of February - Simkins and a small army of volunteers begin drilling and installing the taps. The holes are small, about the size of a penny, and heal over within a year, sometimes two. Simkins and the other farm staff are adamant about only using healthy trees that can stand up to having an exposed hole for a while.

Once the sap begins flowing into the buckets, it has to be collected quickly. Sap will spoil and begin fermenting if outside temperatures rise above 40 degrees for more than a few hours. That results in lower-quality, darker syrup. Last week, there was an extra push to empty the buckets because temperatures were expected to drop into the single digits that night. A full bucket would burst if the water in the sap were to freeze.

Natick is not the only small-scale producer of maple syrup in the area. Drumlin Farm in Lincoln runs demonstrations every year that result in a small amount of syrup. In Weston, the town has had its own sugarhouse since 1973. Several years later, it turned over the maple syrup program to Land's Sake Community Farm, which leases land from the town for agriculture.

Most of them are in wooded areas away from the roads, and so haven't been damaged by salt. The main threat for them, Lee said, comes from the invasion of competing species, such as Norway maple.

"Weston's sugar maples are direct installations or descendants of ones planted a hundred years ago," Lee said. "It was sort of the landscape era: You didn't collect cars; you collected trees and pretty gardens. People brought sugar maples into Weston to imitate the picturesque New England towns farther north."

Climate change also has reduced the number of sugar maples in the area, causing the species to retreat farther north, Beach said. Trees that die naturally are not being replaced at the same rate, he said, because young sugar maples are not well-adapted to today's winters, which are warmer than they were 100 years ago.