THIS STORY HAS BEEN FORMATTED FOR EASY PRINTING
Denise Taylor | Arts 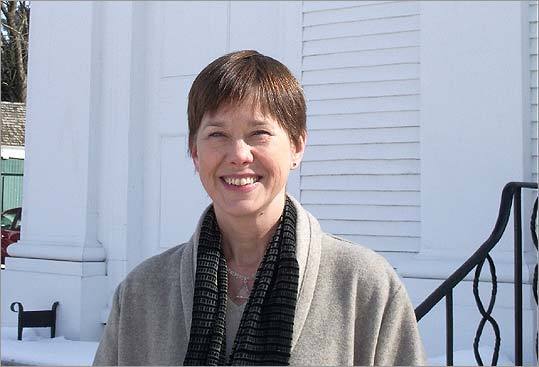 Diane Rapaport, a lawyer and the author of ‘‘The Naked Quaker,’’ at the First Parish Church of Wayland, where a club- and ax-wielding mob had gathered in 1724 to protest the building of a new church.
Email|Print| Text size – + By Denise Taylor March 6, 2008

A fter Lydia Wydell sauntered into Sabbath services, stripped off her clothes, and stood brazenly naked before the whole, shocked congregation, surely no one present that Sunday in Newbury in 1663 ever forgot her assault on their Puritan ways. But for all the uproar, Wydell's cheeky story was still lost to history - that is, until Diane Rapaport dug it up.

Wydell's tale is now the title piece in Rapaport's entertaining and informative new book, "The Naked Quaker: True Crimes and Controversies from the Courts of Colonial New England." Call it Court TV meets the History Channel - in print.

Via a collection of true vignettes, Rapaport reveals that our Puritan forebears were not all stiff hats and stern faces. Colonial misbehavior was rampant. Pigs were purloined, wives were led astray, too many drams of rum were drunk, and even church pews were fought over in unseemly ways.

"You can't make this stuff up," said Rapaport, who lives in Lexington. "When you find stories such as a man who has his pigs stolen by another man named Bacon - yes, Bacon - it's hard not to get drawn in," (especially when Bacon returns one missing sow minus one leg.)

A lawyer and a history buff, Rapaport began mining Colonial court records for fun a decade ago. Eventually, she began writing a column for New England Ancestors magazine recounting the stories they held. Readers were so smitten that they urged her to write a book. She did, and now she's on tour discussing it, and in each town, she usually has juicy, centuries-old gossip to share.

"These days, I really feel like I've always got one foot stuck back in the 17th century. Everywhere I go in New England, I see the places or so-and-so's house where one of these crazy stories took place," she said.

Her next stop is Wayland, where she'll tell all about a rancorous feud between one conniving William Jennison and farmer James Jr. Ross. It peaked with a mob bearing clubs and axes in protest of the building of a new church (where First Parish Church of Wayland now stands peacefully).

"There are hundreds of stories from the court records that I could write," Rapaport said. "Anyone who thinks that the litigation explosion is a modern phenomenon needs to think again. It started back in the 1600s. People had more of a sense of freedom over here to protest and speak out, and they really made use of the courts to do that."

But the court records provided Rapaport with more than just a great volume of material. The firsthand testimony they preserve brought the voices of everyday Colonists to life.

"There really are not that many sources from the 1600s where you get to hear people's actual words. But the testimony recorded for court cases is in people's own words, and reading it makes our ancestors so much more than names and dates," she said. "You realize they're not really that different from us."

On crumbling, ink-splotched court notes, Rapaport discovered colorful loudmouths such as John Jr. Porter of Salem. He narrowly escaped a death sentence after calling his father "a simple ape" and his mother "Gammar [Grandma] Pissehouse." (It also didn't help when he announced that he "cared not a turd for" the local magistrate).

In microfilms in dusty archives, she found vicious witchcraft accusations that occurred long before Salem's witch trials. In a forgotten folder of trial notes, she turned up charges against Harvard students for partying with Cambridge girls, working-class men, and even a black man and his slave brother - surprisingly, all gathered as equals.

After the book was published, prominent genealogists informed Rapaport that she had also unknowingly turned up dirt on forefathers of George W. Bush and Barack Obama. Colonial lawyer John Hoar, who Rapaport reports was one of the first lawyers in America to be disbarred, is a Bush ancestor. Meanwhile, Obama is apparently a direct descendant of one Jonathan Singletary/Dunham, a fire setter and likely adulterer who had an unpleasant run-in with the court.

"No one from the campaign has called me, though," she said with a laugh. "I don't know whether Obama himself wants to claim this particular great-great-great-etc. grandfather."

To help share the wealth with other researchers, Rapaport also has written "New England Court Records: A Research Guide for Historians" (Quill Pen Press, 2006). "I found the court records to be one of the best and, unfortunately, underutilized sources," Rapaport said. "Not many historians or genealogists are using them, and they should."

"It's a fabulous resource. Patrons love it," said Julie Bartlett, archivist for Forbes Library in Northampton. "Genealogy is always such a big treasure hunt. So it's always a mystery as to where records went, and New England has a lot of quirky little systems with various towns and county governments. So her book has it all laid out with where to find these things."

As for Rapaport, she's already moving on to the next step. Now on sabbatical from her legal career, she's working on a historical novel set, of course, in Colonial New England.

CLIMBING TO A HIGHER ROCK: The story of the Adrian Belew Power Trio, which will perform Sunday at The Center for the Arts in Natick, is a real-life rock 'n' roll fairy tale. So that makes maverick, super-cool, mind-and-string-bending guitarist Adrian Belew (of King Crimson, David Bowie, Talking Heads, and Frank Zappa fame), well, sort of the fairy godmother.

In 2006, Belew stopped in at the Paul Green School of Rock in Philadelphia. There he met two teenagers, bassist Julie Slick, now 21, and drummer Eric Slick, now 20. The siblings had been jamming with Green since their grade-school days (that is, since Green started the school in his apartment as a way to pay his tuition).

Belew was impressed, and though he surely could have had his pick of big-industry names, he joined with the Slicks to form the trio. They've been on the road delivering mind-searingly virtuosic rock ever since. New tunes, Crimson favorites, and Belew's solo work all make the play list.

CHRISTIE'S RHYME AND REASON: Leave it to Agatha Christie to turn an innocent-sounding nursery rhyme into a spine-tingling mystery. Starting tonight, Calliope Theatre in Boylston will present "Ten Little Indians," Christie's masterful thriller set on a lonely island off the English coast. Shady guests arrive on the island and they start dropping off one by one - just like a sinister little rhyme left by their mystery host says they will.

As their numbers shrink, accusations turn every which way. No one else is on the island, not even their host, and each of them has murdered before.

"Ten Little Indians" will be presented today through Sunday and March 14 through 16 at the Calliope Theatre at 150 Main St. in Boylston. Tickets are $15, or $12 for students and seniors. Call 508-869-6887 or visit calliopeproductions.org.

Have an idea for the arts column? Please contact westarts@globe.com.