2,000 final touches left for contractors; No official date set for the completion 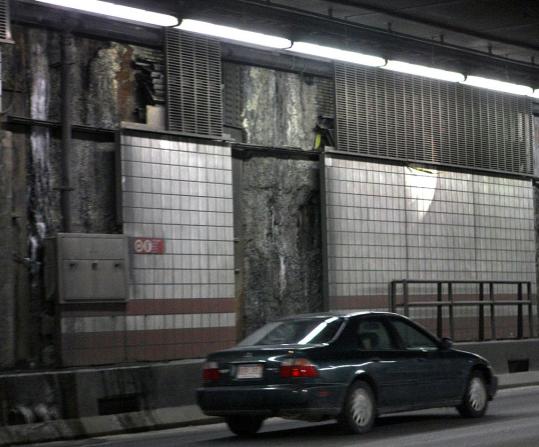 Tiles have been removed on the northbound section of the Thomas P. O'Neill Jr. Tunnel in Boston as part of ongoing leak repairs. The Big Dig still has about 2,000 maintenance items to take care of, so workers will be making repairs for at least the next 18 months. (David L. Ryan/Globe Staff)
Email|Print| Text size – + By Noah Bierman Globe Staff / March 3, 2008

Two months after turnpike managers parted with the Big Dig's chief engineer, shuttered the project's offices, and let its lead contract expire, workers are contending with a 2,000-item to-do list, an indication that the Big Dig remains a long way from finality.

Anyone who has ever hired workers to install a kitchen or repair a roof knows the endgame can be the most annoying chapter, the time to wonder when the contractor will show up and finish the job, and whether domestic peace will ever be restored.

In the case of the Big Dig, an entire state is struggling with the whims of dozens of contractors over the manhole covers that need replacing, the misplaced signs, the missing pedestrian handrails on the sidewalk. At the same time, more serious safety issues such as repairs of ceiling leaks are also delaying the project's completion.

But the many little things left undone easily could be overlooked now that managers at the Massachusetts Turnpike Authority have declared the Big Dig all but finished.

Today, the Big Dig has the long "punch list" - contractor-speak for the cleanup jobs, finishing touches, and repairs that remain after the main job is done.

"It's a $14 billion project. It's not a $200,000 house," said Alan LeBovidge, executive director of the Massachusetts Turnpike Authority, which runs the Big Dig. "It's a massive project. This is our Hoover Dam."

Hundreds of the items are hard to notice: a half-dead cherry tree in a median, long slated for replacement, or the wrong material used for identification tags on circuitry. But in some cases, the leftover work requires crews to close off streets and tunnels and create detours. These jobs have delayed the arrival of the smooth drive that motorists were hoping for after years of Big Dig construction.

"All those small things add up," said Senator Steven A. Baddour , a Methuen Democrat who cochairs the Joint Committee on Transportation.

Every week, the Globe publishes a list of streets that are closed for construction around the Big Dig tunnels, usually from 11:30 p.m. until 5 a.m. It has been the same for months at a time: Interstate 92 south Exit 23 to Purchase Street; the Essex Street onramps; two of three lanes of I-93 north through downtown and Charlestown; and so on.

Helmut Ernst, the chief turnpike engineer, said some of the closures are related to unfinished punch list items, some were related to maintenance, repairs, and inspections, but he declined to give specifics on each job.

Big Dig managers warned in November that the last 1 percent of the project would take a while to finish. Ernst said last week that most of the punch list work would be done in 18 months, but he did not promise finality.

" 'Complete' is a very difficult term in this environment," he said.

LeBovidge was equally cautious, saying he did not want to be lumped with the "thousands that have always been wrong" if he made another prediction related to the Big Dig.

"We don't have a fixed date," LeBovidge said. "We're doing it as fast as we can get it done. . . . The Big Dig is functional. Everybody is using it."

But he warned that even when the remaining work is finished, maintenance on the project will be an ongoing concern. LeBovidge pointed out that the Ted Williams Tunnel is more than a decade old and needs repairs.

"I bet if you went to the Grand Coulee Dam, you'd find guys working on stuff that was built in the 1930s," he said.

The Big Dig's punch list fills a 3-inch binder and includes jobs that were scheduled to be completed as far back as 2001. LeBovidge and Ernst were unable to estimate the cost to complete them. An unsigned Turnpike Authority memo distributed at a November meeting said that the project had $160 million in "construction value" to complete, including projects and claims against the authority from contractors.

As long as shovels are in the ground, critics will continue to question whether the project will ever end.

"This project has been so disastrous," said Senator Mark C. Montigny, a New Bedford Democrat and longtime Big Dig critic. "People should assume that the final outcome will be very disappointing at best, and that means it will go on longer than anybody expects it. The budget will be bloated."

Montigny has little faith in contractors sticking around to finish.

"Why would anybody assume that they are not running for the hills as quickly as they can?" he said.

LeBovidge and Ernst say the work in the punch list has been accounted for in the project's overall budget, currently $14.8 billion. But there are risks that the Big Dig will tip past that mark. Contractors are suing over an additional $145 million they say they are owed on issues that turnpike managers are disputing.

When it comes to dealing with contractors, LeBovidge said he has more leverage than a homeowner would on a renovation project. Big Dig employees can go back and do the work if necessary and then bill the contractor, LeBovidge said.

He mentioned one prominent contractor, Modern Continental, as an example of a firm that has had financial trouble and may not be able to fulfill all the work the authority was expecting. Ernst said some contractors may not be paid if they do not complete the jobs, though he said some of the work in question will be the subject of bargaining.

The key to getting remaining work done may be a sense of urgency. Now that the Big Dig is being run by the Turnpike Authority, many of the old managers are gone.

The monthly progress reports Big Dig construction managers once put on the Internet for the sake of transparency have not been posted since August. Turnpike Authority spokesman Mac Daniel said staff is working on putting a January update online soon. He could not say when.

Andrea Estes of the Globe staff contributed to this article. Bierman can be reached at nbierman@globe.com.