Unearthing the truth of UFOs 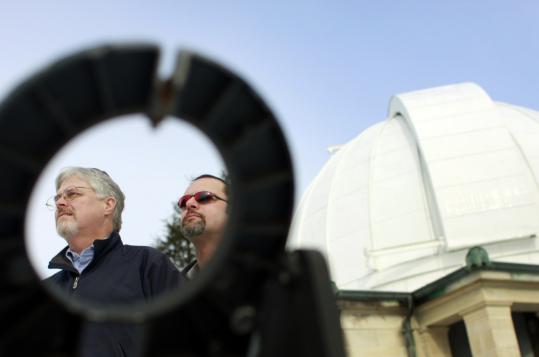 Greg Berghorn (left) and Mark Petty, with Wellesley College's Whitin Observatory as a backdrop, say their Framingham-based group, the Massachusetts Mutual UFO Network, looks into 50 reports of UFO sightings from across the state each year. (ZARA TZANEV FOR THE BOSTON GLOBE)
Email|Print| Text size – + By Matt Gunderson Globe Correspondent / March 2, 2008

The craft was at a very low altitude and moving very slowly in the chilly air above Woburn last November. One witness said she saw the object as she was turning her car onto an exit ramp, and described it as having a triangular shape, three large white lights on the side, and a red light in its center.

Mystified, the woman, whose name was not released for confidentiality reasons, went home and filed an online report with the Massachusetts Mutual UFO Network, a Framingham-based nonprofit organization that investigates sightings of unidentified flying objects across the state.

While such accounts are often explained away or even ridiculed by skeptics, sightings that appear to defy descriptions of conventional aircraft fascinate Greg Berghorn, director of the state chapter of the national Mutual UFO Network, known as MUFON.

The Massachusetts group was established in 1984 and now boasts about 100 volunteer field investigators, and logs approximately 50 UFO reports annually. The vast majority can be explained as hoaxes, misidentified satellites, or even the planet Venus, said Berghorn, but three or four sightings every year are not so easy to discredit.

Strange lights appearing to one person, whose observation skills may be impaired or distorted, is one thing, said Berghorn. But when multiple witnesses report similar unusual sightings independently and from different locations, things get more interesting.

As an example, Berghorn cited an incident in 1997, when a retired machinist in northern Massachusetts filed a report describing a large, low-flying, disc-like object that was moving so slowly it took almost a minute to pass over his house. Another report was filed by a woman a short distance north in New Hampshire, who independently described the same object passing by her house 20 minutes later, he said.

Berghorn drew a trajectory line based on the machinist's account, and the two stories matched up.

"It occurred so that I could actually draw a timeline between their two houses," said Berghorn, an engineer from Tewksbury. "This was a very bizarre object, and it was very unique."

As is the case with most field investigations, Berghorn said, his inquiry into the matter ended there and yielded no more evidence than the two eyewitness accounts.

"What is frustrating about this process is that it's not as cleanly cut as a TV show," he said. "The evidence is very murky. A lot of the information becomes unresolved. People won't talk to you."

The fear of ridicule prevents some would-be witnesses from coming forward, said Berghorn. For this reason, the organization does not disclose the names of witnesses who file reports, unless the witnesses are willing to go public, he said. The national organization estimates that only one in 10 UFO sightings are reported, a number that Berghorn thinks is a little high.

The reports coming into the local chapter vary in nature, he said, ranging from tiny objects streaking or zigzagging across the sky to people allegedly being taken up into UFOs. The abduction phenomenon is largely explained away by mainstream researchers, although a prominent Harvard University psychiatrist, John Mack, sparked controversy in the early '90s after becoming convinced that the abductions are real and not mere fantasies or delusions.

He said a couple, who identified themselves publicly only as Robert and Anne, saw a large craft appear over their house one December evening as they were standing on their deck. They reported being engulfed in a bright white light. As they stared up into the light, a blue beam pierced down, settled on Anne and started pulling her off the deck. In terror, Robert grabbed his wife by the waist and "threw her into the kitchen" before following her quickly through the door.

When he looked back outside, the light had disappeared, according to their report. The man said he was so shaken that he couldn't even pick up the phone when it rang a minute later.

Petty and other field investigators from the chapter canvassed the neighborhood and even placed an ad in local newspapers in an attempt to corroborate the story, but the only supporting evidence came from a sister of Robert. She said she was driving in the area at the time, and saw a brilliant white light with a blue trail hovering near the ground in the vicinity of the couple's house.

While such accounts are compelling for some, Berghorn and Petty both said they are not "true believers" in the notion that extraterrestrials are visiting the planet.

Berghorn said his vantage point as an engineer and amateur astronomer restrains him from leaping to conclusions, though he did say that he views at least some of the reports as unexplained phenomena.

"Most of the really odd [sightings] are sufficiently credible enough that you can't just explain it away by saying the person's crazy," said Berghorn. "And that's what keeps us going."

Physical evidence in the field is scarce but does exist, said Berghorn. Corn stalks that had been flattened in a crop-circle formation in Western Massachusetts, for example, had been exposed to microwave radiation, which is hard to square with a hoax scenario, he said.

Often, witnesses of UFO events are distressed at what they have seen and have difficulty coming to terms with their experiences, added Berghorn. About the only thing investigators can offer such "experiencers," as they are called in UFO circles, is empathy and shared knowledge, he said.

"What I've learned is that oftentimes, people don't really want answers to their questions so much as they want to know that other people have experienced the same thing," said Berghorn. "They at least get some comfort out of that, because we can't offer them any answers."

The Massachusetts chapter maintains a 24-hour hotline for UFO sightings, 781-246-0523. Sightings can also be reported on their website, MassMUFON.com.