But better roads a must, group says 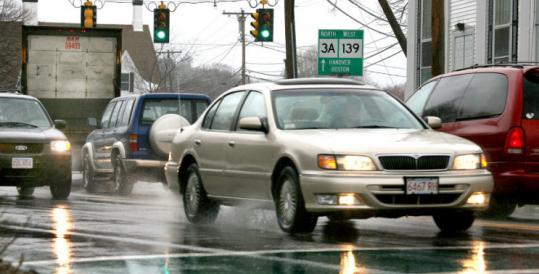 The widening of a 1-mile stretch of Route 139 in Marshfield is one project backed by the South Shore Chamber of Commerce. (TOM HERDE FOR THE BOSTON GLOBE)
Email|Print| Text size – + By Robert Preer Globe Correspondent / March 2, 2008

The region is becoming economically independent of Boston, and state transportation money would best be spent making it easier for people to get around the southern suburbs, rather than into the city, according to a new report by the South Shore Chamber of Commerce.

"Our economic growth really does not depend on big commuting projects in and out of Boston," said chamber president Peter V. Forman in a recent interview at the organization's headquarters in Quincy Center. "It's moving people within the region that is going to be more important."

The chamber's reasoning is that the South Shore has become its own economic engine, with a large enough labor pool to attract major employers, reducing the need for commuting to Boston.

For two decades, the South Shore Chamber of Commerce led the effort to restore the Greenbush line. The organization lobbied on Beacon Hill and mobilized public support for the commuter rail line.

With that battle won last year and trains now rolling from Scituate to Boston, the chamber recently launched its locally oriented transportation initiative.

The chamber has designated a planned 2.3-mile east-west connector road at the former South Weymouth Naval Air Station, now called SouthField, its top transportation priority. For many years, adding a lane on Route 3 in each direction from Duxbury to Weymouth was the chamber's main goal after Greenbush.

While the Route 3 project would ease the Boston commute, the South Weymouth parkway would allow , the private firm redeveloping the former military base, to build 2 million square feet of commercial and indus trial space, which could be a major employment center.

"The impact of SouthField on the region is going to be so dramatic that the most important road project for the South Shore is getting that parkway built," Forman said.

Terry Fancher, executive director of the South Shore Tri-Town Development Corporation, the regional agency that controls the base, applauded the chamber's position on the parkway. Fancher also said the road will help Boston commuters get to the rail station in South Weymouth.

The chamber's second priority project is widening Route 18 in Weymouth. The road is another link to SouthField and to South Shore Hospital, both of which the chamber regards as economic engines for the region.

The chamber's shift in priorities, announced in the report, has generally won applause from state officials, legislators, and other policymakers.

"I know of many businesses that have relocated from Boston to the suburbs. I think the days are gone where a law firm has to be in Boston to be taken seriously," said Timilty, an attorney.

Marc D. Draisen, executive director of the Metropolitan Area Planning Council, said the regional transportation systems need to be adapted to the shift in population, and jobs, to the suburbs.

"One of the weaknesses of our system now is that it was created at a time when the population and job base was concentrated in the urban core," said Draisen, head of the regional planning agency for Greater Boston.

The planning council considers the region from Westwood to Weymouth one of the region's major job growth centers, according to Draisen.

Adam Hurtabise, spokesman for the state Office of Transportation, indicated that both local and statewide projects are important. "We must address both Boston-South Shore traffic and traffic that stays within the South Shore, and we must address similar traffic patterns in other parts of the Commonwealth as they arise."

A major selling point for the chamber's shift in focus is cost. The more local proposals are considerably cheaper than major Boston commuting projects.

Greenbush cost $512 million to build, and the proposed widening of Route 3 is estimated to cost $120 million. The projected cost of the SouthField parkway is $42.5 million. The Route 18 widening was estimated last year to cost $14 million.

Another project near the top of the chamber's list, the widening of a 1-mile stretch of Route 139 next to the Enterprise Park industrial area in Marshfield, would cost about $5 million.

Senator Robert L. Hedlund, a Weymouth Republican and member of the Legislature's Transportation Committee, said the chamber should have come up with this list of projects years ago instead of focusing on Greenbush.

"We have a real problem with any new initiatives at the state because we're broke," said Hedlund, who opposed Greenbush. "The chamber was so obsessed with Greenbush, and now that they have put this wish list together, there is no money for it."

In January, Governor Deval L. Patrick announced the state would provide funding for the SouthField parkway. Hedlund said he believes state funding also will be available for Route 18 widening.

None of the chamber's top priority projects involves mass transit.

Draisen said public transit initiatives should be included in any plan to improve transportation within the region. He said he believes some areas of the South Shore have sufficient population to support van and bus services.

Placing the Route 3 widening lower on the priority list is a smart move, according to Draisen. "We can widen the roads until the cows come home," he said. "There will just be more cars."