A century of Converse shoes have adorned the feet of basketball players, rock stars, and just plain folks 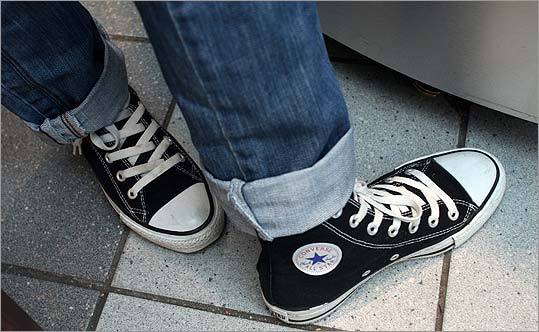 The Ramones. Jackson Pollock. Larry Bird. John Belushi. The Mighty Mighty Bosstones. And probably you. And perhaps your parents and grandparents.

All our toes have wiggled around in the same sneakers - or brand anyway. As of this year, it's a century old. You know the one: Converse. Maker of the Chuck Taylor All Star, the Weapon, Jack Purcells, and, at one time, rubber galoshes.

Yep, galoshes. The sneaker with the star logo worn by rock stars, athletes, and couch potatoes descends from a utilitarian clodhopper that first walked out of a factory - in Malden, no less - 100 years ago.

New England business sense birthed the brand. Basketball, rock, punk, skateboarding, and a misfit attitude are among the reasons Converse has lasted. (If you need an explanation of why the shoes are so cool, well . . . stop read- ing.)

"There's nobody who doesn't recognize the star, even if they don't know who Chuck Taylor was," said Ira Matathia, the 55-year-old director of consulting for New York-based Faith Popcorn's BrainReserve marketing firm. He started wearing Chuck Taylors at age 10 and the shoes have been aconstant.

That's what Marquis Mills Converse was going for when he dreamed up the Converse Rubber Shoe Co. in 1908. Well, that and the fact that the former Boston department store manager wanted to skip the middleman and sell directly to retailers. So M.M., as he was known, opened a plant at 392 Pearl St. in Malden and began making waterproof, winterized boots and rubbers.

"The big idea upon which this firm has been built is that of direct and independent selling," Converse wrote in an early newsletter, quoted in Emily Walzer's "Converse: The History of Converse Inc. 1908-1996." "By means of selling from manufacturer to retailer, more intimate relations can be maintained with the man who is in direct contact with the ultimate wearer of the shoe, and who knows best that wearer's requirement."

But, boy, were those boots unhip outside of winter, according to Walzer's book. Converse had problems employing people year-round, so the company started churning out canvas sneakers. By 1915, business was hunky-dory winter, spring, summer, and fall.

Basketball was still in its infancy, and the game often was played in ballrooms with parquet floors and peach baskets for hoops. And what did many players lace up when they hit the hardwood? Converse, of course:

Miami Heat b-baller Dwyane Wade, who was signed by Converse to represent them in 2003, said it's the shoe's history that inspires him to keep Converse on court today.

"It's an honor to be in the same family as Chuck Taylor, Larry, Magic, and Dr. J. Each of these guys had a major impact on changing the game," Wade wrote in an e-mail to the Globe. "The first thing I think about with Converse is tradition. This brand has been around for 100 years and was the first company to put a basketball shoe on the court."

But at some point - and the reason isn't really clear - the sneaker so linked with basketball became popular enough to cross over. Take a look at Converse's timeline: Rockers adopted Chucks in the 1950s, followed by '70s punks. (A magazine article once called Chuck Taylor high-tops the "one acceptable brand" of sneakers for punk rockers, and the shoes were a staple of The Ramones look.) Purcells were the shoes for wannabe bad boys in prep school, as well as Hollywood actors in the '30s and '40s and beach boys in the 1950s. And One Stars were picked up by West Coast surfers and skateboarders in the '70s and '80s and the '90s grunge crowd.

"The past defines us," said Geoff Cottrill, Converse's chief marketing officer. "There is nothing better than when you have your first pair of Chucks in junior high or high school and you have a pen in your hand. . . ."

Cottrill wouldn't divulge his youthful scribblings on his One Stars, saying, "I was a bit of a disrupter in high school."

So was Gary Koepke, the cofounder and executive creative director of Boston-based ad agency Modernista! He recently designed a black All Star with a red bar code.

"They've always been around in my life," Koepke said. "They're a fixture, like family . . . it's like an archetype now - like a cross or an old label."

It's that way for many a Chucks fan.

As retired Converse employee Mike Blandini put it: "The old Chuck Taylor All Star was the bread and butter of the company."

Blandini knows. The 77-year-old spent almost half a century shaping shoes for some big names.

"We had Aerosmith down at Converse," Blandini said while reminiscing from his Saugus home. "We had U2 down at Converse. We had Twisted Sister . . . what's that other band? We made knee-high boots for them - I should say, knee-high All Stars . . . was it Pearl Jam? Oh yeah. We made shoes for them."

In fact, jazz, rock, punk, emo, ska - whatever music you strum on the guitar or pump through your earbuds, chances are you've worn Chucks - or Cons, as music guru David "Beno" Benveniste likes to call his Converse.

"I think the Cons are synonymous with credibility and attitude," said Benveniste, whose Velvet Hammer Music and Management Group counts Alice In Chains, System of a Down, Cypress Hill, and the Deftones on its roster.

As it happens, Deftones musician Frank Delgado sported a pair of black low-top Chucks while talking about growing up in Southern California.

"There was a neighborhood store where you could buy your pants, your shoes all in one place," Delgado said. "My dad used to buy me Chucks because they were the cheapest things on the block."

"Back in the day I would write 'Sex Pistols' down the side of my sneakers," Barrett said. He never was a big fan of many other sneaker brands. "Swoosh. Too swooshy for me. Give a star, give me a bar."

His faith in the star was shaken, however, when Barrett spied One Stars at Target. As a kid, he bought his Converse at Massachusetts mom 'n' pop shops.

"OK, it's officially uncool: Now you can get them at Target," Barrett joked.

But even that affront - a tear slipped down his cheek, he said - wasn't enough to quell Barrett's pride that one of his fave shoes was born in his home state.

He figures other Converse aficionados feel the same, especially Maldonians.

"I was doing a piece for Jimmy Kimmel yesterday . . . and Ben Affleck was involved and he was wearing a pair of Converse," Barrett said. "Boston guy. Boston shoe. I'm just saying."