A 4-year-old ambassador against fear 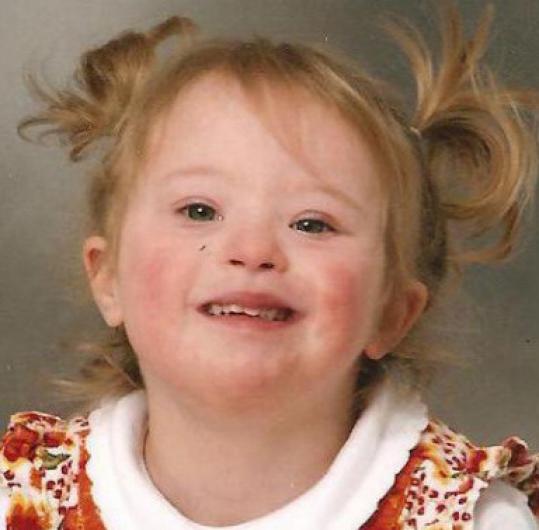 This is what "internationally renowned" Sherman J. Silber, M.D., writes in his "completely revised and updated" book "How to Get Pregnant," published by Little Brown and Co. last August: "The biggest fear of most pregnant women is that their child will be abnormal, and the most common abnormality they worry about is Down syndrome. . . . These children are severely retarded mentally, and they usually die before their thirtieth birthday."

He also writes: "We can prevent couples from having to face the horror of giving birth to children with otherwise devastating genetic defects such as Down syndrome, cystic fibrosis, muscular dystrophy, mental retardation, etc., that terrify every woman who ever gets pregnant."

Silber's book has sold more than 400,000 copies. It's been translated into Spanish, German, and Russian. He's been on "Oprah," "Good Morning America," and NPR.

Silber may be popular, but he is wrong.

"Most people with Down syndrome have IQs that fall in the mild to moderate range of retardation. Some are so mildly affected that they live independently and are gainfully employed," says the National Institutes of Health, the federal agency that speaks with authority on this issue.

"Most of the health problems associated with Down syndrome can be treated, and life expectancy is now about 55 years," says the March of Dimes.

It takes a long time to alter public perception, to dispel these untruths. I know. My granddaughter has Down syndrome.

"This is Lucy," I say to someone new and Lucy smiles, or doesn't, because she is 4 and 4-year-olds can be sweet or they can be indifferent and stare at the floor.

But mostly she is sweet and says "Hi" before bolting across a room to wherever she wants to be. Mostly she makes a good impression. And this is important because Lucy may be the only child with Down syndrome this person ever meets.

Lucy frightens no one. She's a pretty girl with light brown hair pulled into two pony tails, sparkling green eyes, and a knack for leaving people who meet her not sorry and sad, but happy.

Amy, my friend Anne's daughter, was the same way. She had cystic fibrosis. She lived for 11 years. Too short a time. But a good time, a beloved time, not a horror.

Efforts to change the way people think about kids with disabilities are slow going because there are not enough Lucys telling the world that they're OK. Lucy is not on "Oprah." Lucy is not an "expert."

But the truth is that Lucy shows people that Down syndrome is not the end of the world.

This truth is in books, too, and in movies and blogs and in other people with Down syndrome. But who in the general population would hunt down "Praying with Lior," a documentary about a 13-year-old boy with Down syndrome who loves to pray? Who would read "Gifts," a collection of stories written by mothers of children with Down syndrome? Who would watch "Down Syndrome - The First 18 months," an educational video put out by Woodbine House?

Who will read blogs about Down syndrome just to learn?

Only people who have reason to learn. The rest of the world learns as they go, believing the facts that some "expert" gets wrong. So misinformation lives and old beliefs endure and negativity reigns.

On paper, kids with disabilities do not make a good impression. On paper, Lucy is all negatives. Low muscle tone. Speech delayed. Cognitive impairment. Slow to walk, to learn, to grow. Even her almond-shaped eyes are a negative, though God knows why. They are beautiful, like her mother's, bright and full of wonder.

But in person? Lucy charms.

In person, Lucy is just a person, 4 years old, saying her hellos, then racing away to discover the world.

Beverly Beckham can be reached at bevbeckham@aol.com. Listen to Beverly's weekly podcast at boston.com/news/podcasts.