Town curmudgeon's howling grates on some 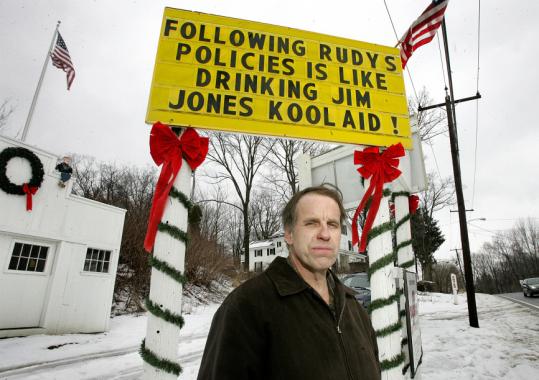 BROOKFIELD - It's hard to miss the vitriolic slogans by the side of Route 9, the busiest thoroughfare in this bucolic Central Massachusetts town. And Dave Holdcraft likes it that way.

Holdcraft, a landscaper and self-proclaimed civic watchdog, spells out a new allegation on the garish yellow billboard he has erected every time he feels that the public needs to know the truth. Or, at least, to know the latest local issue to get him riled.

"Why are we having fights, chaos and noise in our library?" demanded the billboard, in capital letters, after Holdcraft was upset by reports of unruly behavior at the town library. "Why the Green Party?" the sign queried, after Holdcraft decided he was unimpressed by a candidate for selectman from that party. "You can't gavel me silent," screamed the sign, after a selectman did just that to Holdcraft at a meeting.

Hurling a new attack or allegation every week, the sign has provoked amusement and outrage in this town of 3,000 people west of Worcester, split by the rushing Quaboag River.

Some selectmen and residents say the negative tone of the messages is destructive and unhealthy, hurts the town's reputation, and discourages residents from volunteering for town committees because they fear becoming objects of Holdcraft's ridicule.

Holdcraft said he considers it his duty to hold elected leaders accountable. A volunteer on several town boards, he scoffed at the suggestion he has scared off others from becoming active in public affairs. He also vowed not to tone down his block-letter outbursts.

"If they're public officials, they should be accountable, and their names should be there," he said. "I try to let people know what's really going on, and tell it the way it is, and they don't like that."

Holdcraft's fractious history with the town dates to the 1980s. Known by some in Brookfield as "Dump Man," he said, he fought for years for a permit that would allow him to run a small rubbish business on the land where the sign now stands. Neighbors complained bitterly about his practice of leaving discarded items such as mattresses and lumber on the site, a habit he admits he sometimes indulged in to affront officials who tried to stymie his effort to win a permit.

In the past few years since he received the permit, Holdcraft has cleaned up the property, on a commercial stretch of road near an auto repair shop and a liquor store. He said he erected the yellow billboard and started posting messages about four years ago, after moving to Brookfield in 2000 and becoming involved in town affairs.

He has used the sign to accuse town leaders of stifling public discussion and withholding information; recently, he railed against library trustees for their polices and assailed selectmen for proposing changes in the rules for board appointments.

Selectman Rudy Heller - who was targeted in a message this week comparing him to Jim Jones, the infamous suicide cult leader - said he tries to ignore the sign. Heller added he is glad to be its whipping boy if it keeps town volunteers and employees out of the spotlight.

Residents and selectmen say they have grown weary of the public vitriol, and are concerned that it is fraying the fabric of their small community. Town boards and committees that rely on volunteers have faced a spate of vacancies in recent years, officials said.

"It gives the town the image of always being at odds, and if you express your opinion, you might end up on the sign," said Sandra Couture, a resident who lives across the street from the billboard. "When people are busy, why are they going to give their time to something that's just going to be antagonistic and unpleasant?"

Meredith Simmons - a daughter of Couture who is a teacher's aide at Brookfield Elementary School, which also sits across the street from the sign - said she has seen students as young as 5 struggling to understand Holdcraft's messages.

Holdcraft's bare-knuckle commentary has sparked objections to his own recent appointment to Brookfield's Finance Committee. Last month, 33 residents signed a letter protesting his involvement because of what they described as his failure to show objectivity.

The chairman of the board, Barbara Wilson, defended Holdcraft and said she sees no reason why he should not serve.

"When he sees something going on, and he's usually right, he gets up there and says it in plain English, and I can't fault him for that," she said. "I've served with him on the Culture Committee, and he's a worker."

At least one of Holdcraft's targets believes his attacks have brought a benefit. Brenda Metterville, director of the Merrick Public Library, said the number of active members in a group of library supporters has grown from two to 15 recently, an upswing she attributes in part to Holdcraft's hectoring.

"Let him exercise his freedom of speech," said Metterville.