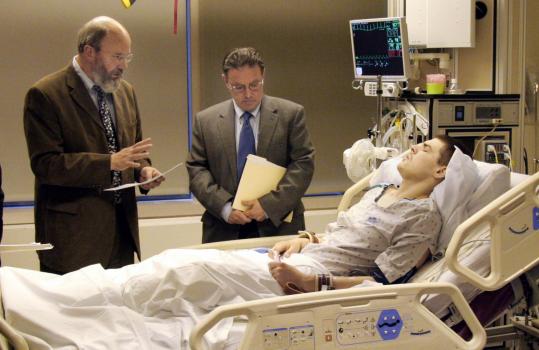 A Lynn man apparently stabbed his mother to death Monday when she told him she couldn't help him file his tax returns, a Suffolk County prosecutor said yesterday.

When Roche refused to drop the knife and extended it in front of him, Officer James Rose shot him once in the torso, the district attorney's office said.

Cory Roche, who was in fair condition, was arraigned in his bed at Massachusetts General Hospital on charges of murder and armed assault with intent to murder. Roche's lawyer, Robert J. Wheeler of Boston, entered pleas of not guilty to both charges.

Wearing a hospital johnny, Roche grew angry as Lee outlined the prosecution's case. "I'm not talking to you," Roche loudly told Judge Timothy H. Gailey and Chelsea District Court officials, according to the one pool reporter allowed into the hospital room.

At that point, the judge ended the proceedings and ordered Roche held without bail.

"He was in pain . . . and he appeared somewhat confused," Wheeler said, adding that it was unclear when Roche would be released from the hospital.

Officials said yesterday that Lisa Bryson Roche, 42, lived in an apartment that encompassed the basement and first floor of a building on Fernwood Avenue. At the time of her stabbing, a number of people were at the home, including her adult daughter and her daughter's fiance, as well as Bryson Roche's 17-year-old son and two daughters, ages 2 and 6.

Prosecutors said Bryson Roche was stabbed on the first floor, family members heard screams, and someone in the apartment - prosecutors did not say who - called police.

Roche was taken to the hospital and pronounced dead on arrival Monday afternoon.

Authorities released few details about Rose. A Revere police spokesman could not be reached yesterday evening. Attempts to reach Rose were also unsuccessful.

The shooting is the second by a Lynn police officer in recent months, the Daily Item of Lynn reported.

In late January, Officer Jose M. Prochilo-Garvey wounded Jesus M. Liria, 20, who allegedly was drag-racing. Liria left the scene and was later treated for a gunshot wound to the leg at Salem Hospital. Police said the officer fired in self-defense after Liria tried to run him over. Prochilo-Garvey was assigned to desk duty after the shooting.