Magic number is his again 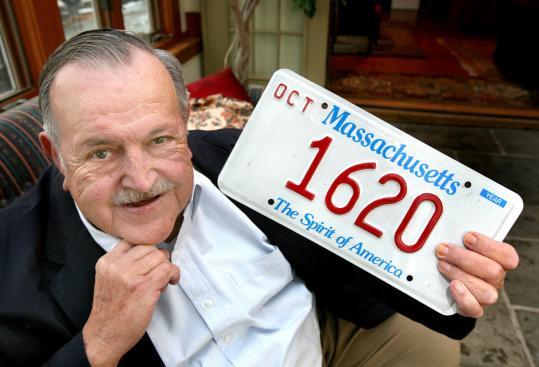 Dexter Olsson displays the license plate with the number that was originally given to his father almost 50 years ago. (Tom Herde for the boston Globe)
Email|Print| Text size – + By Christine Legere Globe Correspondent / February 21, 2008

PLYMOUTH - Mayflower descendent Dexter Olsson has won his three-year quest to reclaim his Massachusetts license plate bearing the number 1620 - the year of the Pilgrims' landing. But doing so required the same fortitude and perseverance his famous forebears had.

Olsson's effort paid off on Friday when Governor Deval Patrick, with a stroke of his pen, settled a dispute between the local Police Department and Olsson over his right to the plate. Patrick signed a bill that grants the 72-year-old Olsson and his descendants the use of the 1620 plate.

Olsson's family can trace its roots back to William Bradford, a Mayflower passenger and second governor of Plymouth Colony.

The 1620 plate was given to Olsson's father, George, nearly 50 years ago by Governor John Volpe in recognition of his many years of public service. The elder Olsson played a variety of roles in Plymouth: He was cofounder of Plimoth Plantation, director of for more than 15 years, and a longtime clerk of the courts.

"My father was given the plate by Governor Volpe because he did so much, not because he asked for it," the younger Olsson said last week.

George Olsson's wife took over the license plate when her husband died, and when she died, the plate went to her son, Dexter, in 1996.

Then, on a summer day in 2002, someone snatched the front plate off Dexter Olsson's car while it was parked at the waterfront. Olsson is convinced the license plate is far more likely to be hanging on someone's wall than attached to another car.

"It's probably behind the bar somewhere in Brooklyn," Olsson mused.

Olsson dutifully reported the stolen plate to local police, filled out the required forms, and was able to get a replacement plate issued by the Registry of Motor Vehicles.

But a year later, when he bought a new car and needed registration stickers, Olsson was told by the Registry that the 1620 plate could no longer be used because it was listed as stolen in the computer system.

Olsson, not one to give up easily, enlisted the help of some public officials who he thought might apply pressure and persuade the Plymouth police chief to take the plate off the stolen list.

"I went to the former sheriff, Peter Forman, [state Representative] Vinnie deMacedo, and the town manager and asked them to talk to the police chief," Olsson said. "The Registry said I could have the plates if I could get a quick statement from the police."

But Police Chief Robert Pomeroy would not back down.

According to Olsson, the chief argued that if the plate had been stolen and was put on another car, the thief might be involved in an accident or some worse mischief, and Olsson, if he had the same license number, could be held responsible. The chief did not return a call from the Globe to further explain his reasoning.

Olsson eventually decided to pursue another course. He asked deMacedo to place a bill before the Legislature recognizing his right to the 1620 plate, and the state representative agreed.

"It would have been a shame for his family to have lost the plate, but I wanted to respect the concern of the police chief," deMacedo said. "So I waited until the registration sticker on the [missing] license plate was out of date."

The bill, which failed to gain approval its first time through the Legislature, according to deMacedo, was eventually enacted by the House and Senate. The governor added his signature last Friday.

Under the legislation, the Registry will be ordered to allow Olsson use of the 1620 plate. The law stipulates the plate must always remain in the Olsson family and cannot be sold.

Since the plate's significance is tied to Plymouth, Olsson plans to give it to whichever of his children settles in town. "I have one or two children who will probably end up here," Olsson said. "And my daughter has a great interest in genealogy."