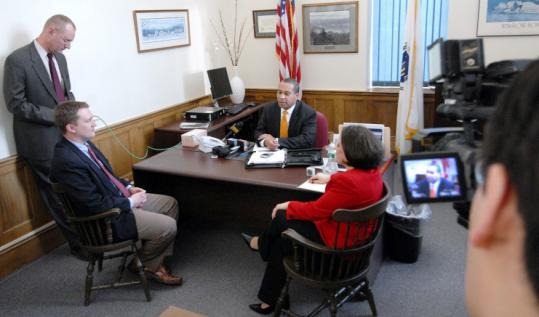 SPRINGFIELD - For the first time since 2003, Western Massachusetts residents can reach a branch office of the governor in their 413 area code, a service that some say reduces the geographical and political distance they sometimes feel from Beacon Hill.

Governor Deval Patrick's administration reopened the Springfield office part time in October and, as of Jan. 15, it switched to full-time hours. That makes Massachusetts one of two New England states, along with Connecticut, to have a governor's office beyond the state Capitol.

Patrick, who has a vacation home in Richmond, promised during his campaign to reopen the office. That was a welcome message to those who believe their region got second-class status from Boston-centric politicians.

"Anything that happened, the state always seemed to just pay attention to Worcester and east," said Clodo Concepcion, a 75-year-old retiree and community activist. "I'm very happy they've opened the office again, but I hope they make sure it's a place where we can really get help."

The office in downtown Springfield, which opened briefly in the 1970s under Governor Edward King's administration, was revived in 1983 by Governor Michael Dukakis. It remained open for 20 years until Governor Mitt Romney closed it in 2003.

Disappointment over that move turned to anger in 2005 as residents and officials accused Beacon Hill leaders of moving too slowly when widespread flooding displaced scores of Western Massachusetts residents and destroyed 75 mobile homes in Greenfield.

Patrick said during a recent visit to the Springfield office that he hopes to add employees to help office Director Elizabeth Cardona.

"All through the campaign, I had a sense from people I talked to that frankly, from I-495 west . . . people feel like Beacon Hill isn't always paying attention to them," Patrick said, arranging folders on his desk in the third-floor office.

"We're up and running, and we'll be sorting it out as we go," he said. "It'll probably be a bit of a refuge for me, too. It's pretty calm here."

Cardona, 39, a Springfield native appointed in January to run the office, said she receives a steady stream of calls from throughout the four-county region. Many people have questions about state services or suggestions on improving programs. Others need help with everything from starting a business to understanding the state's healthcare insurance requirements.

"Our goal is to make this office as valuable a resource as possible," Cardona said.

For some city leaders, having a local office already is saving time and money. Mayor Michael Sullivan of Holyoke said a state hearing officer recently held civil service hearings in the Springfield governor's office, saving the time and travel for him, the city's police chief, attorney, and others.

"One thing we've seen from this administration is a renewed interest from Boston in general, in being willing to come out here and try to understand this area more effectively," he said.