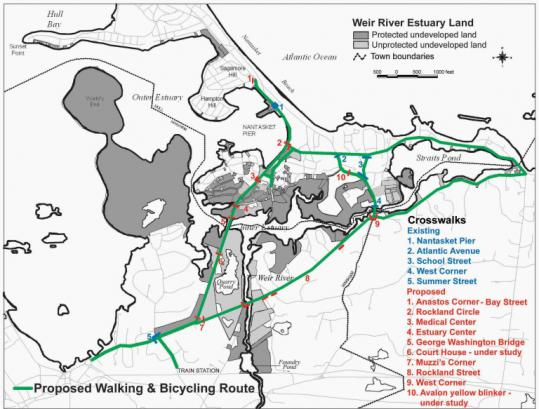 To make it easier to walk and bike, including for commuters, environmentalists are proposing a greenway spanning five South Shore towns.

Proponents say a South Shore Greenway would build on substantial progress already made by the towns of Cohasset, Hull, Hingham, Norwell, and Scituate in creating safe pedestrian and bike ways within those towns. The plan would join the corridors and fill in gaps where needed.

Sponsors held a public meeting recently and scheduled a second for March 3 to present a report on the plan by students of the Conway School of Landscape Design.

That meeting will be at 7 p.m. at Cohasset Town Hall.

"All of these communities have some beautiful open spaces," said Judeth Van Hamm, president of the Sustainable South Shore, the idea's originators. "It's not just that we're linking these paths together. They themselves link these beautiful parks, harbors, and waterfronts, along with the ferry and the train stations."

A greenway, according to the architects and environmentalists who pioneered the movement in the 1990s, is a network of natural corridors where people can walk, bicycle, and push a stroller. The "green" activities of walking and biking are linked with trains and boats - considered "green" transportation because they use less energy and pollute less than highway traffic.

Local residents who attended last month's meeting at the First Parish Church in Norwell said they were enthusiastic about a greenway that would cause visitors to stop and notice the scenic areas they drive by on their way to the Cape.

"One of the hopes people expressed was that it would draw people to the area," said Michael Lance, a graduate student of the Conway School, the only institution in the United States devoted to sustainable landscape planning and design. The three students working on the South Shore Greenway report conducted the meeting that drew 56 people, including some officials of the five towns. New to the South Shore, the students were impressed to find an "incredibly beautiful area" so close to Boston, the Conway School's Andrew Weir said.

Weir said "greenway" is an umbrella term for a corridor that would look different in different communities, ranging from densely populated Hull with its long sandy beach to Norwell's open space and grassy riverbanks.

"The whole idea of connections is central," said the school's Kathleen McCormick.

Each of the five towns involved has been making progress in improving pedestrian and bike paths and linking existing corridors, greenway proponents said. Some improvements were inspired by, and even paid for by, the restoration of the Greenbush rail line that runs through Hingham, Cohasset, and Scituate. Roadway reconstruction along Route 228 has made it possible to bike long stretches of a major regional road that were dicey before, Van Hamm said. Improvements to old narrow roads have opened much of the Weir River Estuary in Hull, Hingham, and Cohasset for exploration by foot and bike, creating a "figure-eight" double loop of pathways with views of marshes and islands.

Sidewalk improvements have taken place in the three towns, and a planned road reconstruction at West Corner will knit the three together while improving a problem spot for bike riders and walkers.

New sidewalks on Forest Avenue in Cohasset and a new bike path on an old railroad right of way create the possibility of linking Forest Avenue to the Cohasset rail station and nearby Wampatuck State Park, creating the kind of network of hiking trails, bike ways, and rail transportation that causes greenway advocates to wax poetic.

At the south end of the projected greenway, Scituate planners, led by the local citizens group People for Active Transportation and Health, or PATH, have created a loop of connected walkways called "the Driftway."

Local government has made improvements for walking and biking a priority throughout the region, Van Hamm said. The Hull Bicycle and Walk Plan adopted by selectmen last May made goals of redesigning George Washington Boulevard to be bike- and pedestrian-friendly, creating safe bike and walk ways through the Nantasket beachfront district, connecting sidewalks and providing corner curb cuts throughout town, and creating "home zone" streets with low speed limits in neighborhoods with limited traffic.

Greenway proponents also have identified some stretches where improvements are needed, Van Hamm said. George Washington Boulevard, which connects Hingham and Hull, has stretches that are not friendly to either pedestrians or bikers, she said, and it needs to be "restriped" to create bike path shoulders on each side. The boulevard also has spots that offer attractive views but make it impossible to cross the roadway "without taking your life in your hands," she said.

The Hingham Rotary also needs to be made safer. Reducing the speed limit on George Washington Boulevard, which feeds into the rotary, would help, she said. Greenway backers plan to ask the state to study the road for safety improvements.

West Corner, where the state plans to realign Rockland Street with Jerusalem Road, needs safety improvements for walkers and bikers, and a stretch of Jerusalem Road in Cohasset where people walk to Black Rock Beach lacks sidewalks and is dangerous, Van Hamm said. Greenway backers will ask the town of Cohasset to study that road.

Other Greenway improvements include building more sidewalks in Scituate, connecting Forest Avenue to the Cohasset train station, and building pathway links in Norwell.

Recognition of the South Shore Greenway by state and local government will lead to maps, signs, and physical improvements, supporters said.

"Maps are our thing," Weir said. The Conway School design students said their report will offer recommendations towns and other backers can act on. In addition to Sustainable South Shore (a regional group of "green" activists), the study is being sponsored by Cohasset Cycle Sports, Jake's Seafood Restaurant in Hull, and Scituate's People for Active Transportation and Health.

"The idea is to link all these treasures that we have," Van Hamm said. "There will be a map; people can follow it. We'll be in line to get money to fill in the missing pieces."

She also envisions a time when tourists can take their bikes on a train or boat from Boston to the South Shore, get off at the station, and ride.