Says added minutes are due to longer stops 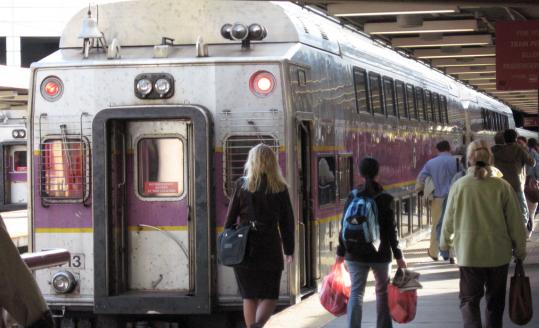 The MBTA has found a new way to improve the on-time performance of some commuter trains: Add a dozen minutes to the schedule.

Yesterday, the T released new departure and arrival times for its Worcester/Framingham line, the tardiest of its routes, adding 6 to 12 minutes to scheduled trips.

Starting Tuesday, some trains that used to be counted as late would come in officially on time, even if they don't actually travel faster.

State legislators had been pushing for the change since fall, when about half the trains on the line were at least five minutes late.

Last month, on-time performance on the line improved to just under 70 percent. Representative Alice Hanlon Peisch, a Wellesley Democrat, has argued that a more accurate reflection of the travel times would let commuters plan better.

"If these trains are never going to be on time, it is far better for the commuter to have the time reflect the reality," Peisch said.

The T and the Massachusetts Bay Commuter Railroad Co., the contractor that runs commuter service, said the changes were based on a study of actual travel times using stopwatches, the first such analysis since the line opened 13 years ago. Since then, 40 percent more riders have traveled the line, meaning that trains stop longer at many stations.

"You add 20 or 30 seconds to each station, 16 stations. That alone justifies changes to the schedule," said James F. O'Leary, general manager of the Mass. Bay Commuter Railroad.

The Worcester/Framingham line is the only one in the system dispatched by CSX Transportation. Commuter trains on the line have to share track space with freight trains and maintain lower speeds than on other lines.

Many commuters have been furious with the delays.

"It's all about reliability," O'Leary said.

Overall, commuter rail on-time performance improved in January, to 77.4 percent, compared with 70.5 percent in December. Under its contract with the MBTA, Mass. Bay Commuter is supposed to run on time at least 95 percent of the time, or pay penalties.

The T plans to begin alerting commuters to the new schedules with fliers and signs this week, explaining the changes and the reasons for them.

One rider - Lois Parker, 49, a hospital pharmacist from Holliston - has begun driving to work more often, rather than risk late trains.

"For someone who works at a hospital like I do, I need to be able to get to work earlier, not later, and I think that's where it tends to fall short," Parker said in a phone interview from her car yesterday afternoon.

Paul Regan - executive director of the MBTA Advisory Board, which represents communities served by the T - said that the agency has to explain the schedule changes and that it has to make the case that they reflect "truth in advertising," rather than poor service.

"They've got to improve reliability and win back riders," Regan said. "I'm concerned that people are going to think that they're just running the trains slower."