Police set to search for guns at homes

Voluntary program is issue in community 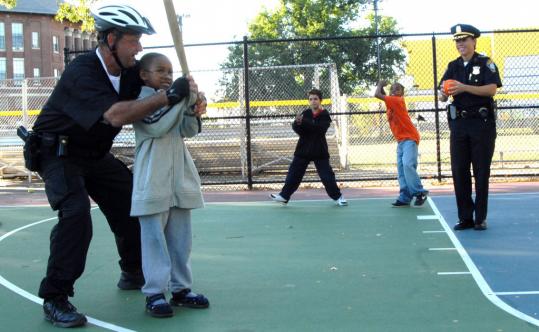 This is one of the images from the Police Department's Safe Homes brochure, created to promote a program to confiscate illegal weapons from young people.
Email|Print| Text size – + By Maria Cramer Globe Staff / February 9, 2008

As Boston police prepare to go into some of the city's most dangerous neighborhoods, knock on doors of private houses, and ask if they can search for illegal guns without a warrant, officials are trying to pitch the idea of the plan as friendly cooperation to residents who still see it as a threatening intrusion.

A friendly looking logo - a drawing of a house surrounded by the sun - adorns the brochure police have drafted to explain and promote the initiative, "Safe Homes." Photos of officers playing baseball with children and chatting with teenagers dot the pamphlet. Twice, police have taken calls from listeners on a black radio station in Roxbury.

By the time they start going door to door next month, police hope they will have reassured clergy, neighborhood leaders, and parents who still see the program as a way to violate the privacy of residents in neighborhoods with a large population of minority-group members and and immigrants.

"There is a big trust issue," said Deputy Superintendent Gary French, who will oversee the Safe Homes program. "I think a lot of people think there's going to be some kind of behind-the-scenes hook to this, and there really isn't. The reality of it is it's strictly a program aimed at getting guns out of the hands of juveniles."

Police plan to search for weapons in four Dorchester and Roxbury neighborhoods by late February or early March. Relying on the tips from schools, community organizations, and parents, they will look in the rooms of any children whose parents or guardians give consent to the search, French said. (The program does not apply to anyone over 18, because they are legally adults and parents can no longer give consent to a search of their rooms.)

Ten officers and a sergeant assigned to the city's schools have been trained to conduct the searches. Most of them speak a second tongue, Spanish or Cape Verdean Creole.

To further put residents at ease, officers will wear civilian clothes and try to look like office workers on casual Friday rather than FBI agents, French said. "They won't go in there in a three-piece suit."

Since announcing the initiative in November, police have held several community meetings about the program and developed an advisory council of religious and community leaders. They suggested that the brochures make clear that residents do not have to consent to the search, and they urged that ministers or social workers accompany police during searches, French said.

Some clergy members have apparently volunteered to accompany police on the searches because they are suspicious of their intent.

"My belief is there are ministers that will do it as part of their ministry because they want to make sure police don't overstep their boundaries," said the Rev. David Wright, executive director of the Black Ministerial Alliance, whose board has not decided whether to endorse the program. "And I think that's a valid point."

Other ministers are staying away from the searches. They fear that if they are with police when they find a gun that is connected to a homicide, residents will stop trusting them.

"I'm not going to go and help them get a gun, and then a kid gets arrested because there's a body on it," said the Rev. Shaun O. Harrison, a Dorchester minister. "There is my credibility going down the tubes."

Like many ministers, Harrison works with gang members and tries to persuade them to hand over their weapons anonymously. He knows they trust him because he will not turn them in.

Harrison has also lost a loved one to the violence: His nephew, Roderick Carter, 23, was fatally shot last month.

"I'm conflicted about this thing here," Harrison said. "I know they're trying to do everything they can to get guns off the street. I commend them for that, but I don't think that's the way." French said police will test all the guns to see if they were used in shootings. But he said he doubts any child would be arrested as a result of the search, even if police found a gun that turned out to be a murder weapon.

"If I stopped you today and you have a gun, that doesn't suggest that you had that firearm two months ago," he said. "It doesn't put you at the scene of a crime. . . . If we don't have any information that ties you to the earlier crime, that investigation is going to go nowhere."

Wright said it is possible that a child could be storing a gun for a gang member - a friend, a relative - and would be beaten if police took the gun. But French said that possibility was remote.

"There are a thousand what ifs with this program," French said. "I don't see us running into a lot of situations where we run into some of the worst-case scenarios that are being put out there."

French has found converts. He won over M.C. Spice, host of "The Big Morning Thing" at Touch 106.1 FM, when he spoke about the program on the show.

"I was so against it," said M.C. Spice, program director of the station, located in Grove Hall. "But the fact that he came in here and he was a person - he wasn't in there with direct orders: 'Hey we're the Gestapo and we're going to go in.' He said his point with passion and conviction. He cared about the youth."