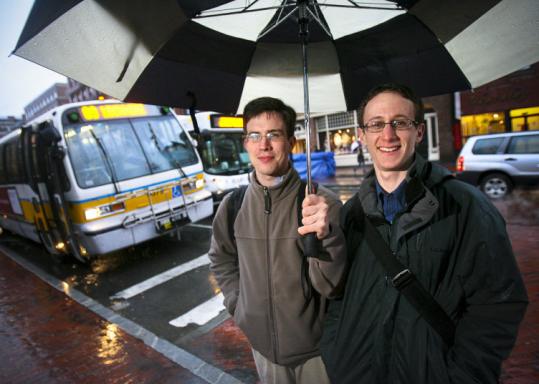 Fifteen billion dollars and still there is no cellphone service in the Big Dig.

The service has been promised before the tunnels were opened four years ago. When Big Dig officials are asked about it, their answers come full of red tape and lots of assurances about how the service will be installed soon. Of course, none of these important discussions are taking place by cellphone from the tunnels.

In early November, a consortium of the four major cellphone companies signed an equipment contract and pledged to begin construction, at a cost of $7.6 million to the firms. The companies - , AT&T, , and T-Mobile -said at the time it would be a three- to six-month project.

So we should be expecting cell service any day now, right? Wrong. More delays are on the way.

Last week, a spokesman for the companies, Mark Elliot, said the cellphone companies signed an installation contract Jan. 3. But they have not started construction and now say it will take "many months to complete given the complexity of the system," according to an e-mail from Elliot.

"We all wish it was as easy as just putting it in," Elliot said. "We're working as diligently as we can."

Elliot would not provide a timeline.

For some, a solution to the wait/walk dilemma at the bus stop has been as elusive as the nature of time itself.

Should we wait for a slow-arriving bus or walk to our destination? And once we have decided to walk, is it wise to stop along the way in hopes that a bus will arrive at an intermediate station? Or should we charge ahead and live with the consequences of our actions?

Enter a pair of Harvard students and their friend from the California Institute of Technology who could not get the vexing questions out of their collective brains. Together, they developed a series of math equations and produced a three-page report : "Walk Versus Wait: The Lazy Mathematician Wins."

The title gives away their answer. Through a series of indecipherable symbols, letters, and numbers, they argue that it is usually mathematically quicker to wait for the bus, at least for a little while. But if you decide to walk, keep going. Do not look over your shoulder and second-guess yourself. That wastes time.

"You already optimized your expected waiting time," said Scott Kominers, who at age 20 is already fluent in math jargon. "You shouldn't spend any more time thinking about the bus."

The unpublished paper does not take into account the cardiovascular or mental health benefits of a nice walk through Cambridge. Cold mathematical formulas leave no room for such niceties as an unseasonably warm day.

Kominers - a math, economics, and ethnomusicology major - said he began fixating on the problem while walking from MIT to Harvard one day and enlisted the help of Caltech physics major Justin Chen and Harvard statistics major Robert Sinnott.

Kominers acknowledges that if you actually see a bus when you happen to be passing a stop, you should crumble up his research paper and hop on the bus - "unless you're going to be an ornery mathematician."

Remember the piece of the bustling Massachusetts Turnpike that attracts fewer than 60 cars per day? That would be the much-hyped U-Turn lane by the Allston tolls, opened in October at a cost of $1.6 million.

For the first two weeks of 2008, just 56 drivers a day looped around the ramp, positioned just before the toll booth to allow easier access between Logan International Airport, Back Bay, and the Boston Convention & Exhibition Center.

That represents a drop from the 200 drivers a day who used the ramp early on, which in itself is paltry compared with the 1,200 to 2,000 a day it was intended to accommodate.

Neither does anyone else. About a third of the vehicles that use the U-turn do so illegally, according to Turnpike statistics.

So why not open it to regular traffic?

Alan LeBovidge , the new executive director of the Massachusetts Turnpike Authority, "is looking at this very seriously," said Mac Daniel, spokesman for the authority. "And when we get a few higher priority items off of our table and start to breathe again, I'm sure he'll reexamine whether the U-turn can, or should, be open to the general public."

Parking will be restricted in Kenmore Square from 8 a.m. today to 2 a.m. tomorrow to aid crowd control and security before, during, and after the Super Bowl. Traffic will also be prohibited from exiting into Kenmore Square from Storrow Drive at the Bowker Overpass and Charlesgate West at 7:30 this evening for the same reason.

Two or three lanes of Interstate 93 south approaching and through downtown will close from 11:30 p.m. to 5 a.m. tomorrow through Friday.

The underpass from Storrow Drive east to I-93 north and Tobin Bridge will close from 11 p.m. to 5 a.m. Wednesday through Friday.

Lanes will close on I-90 east near the Prudential Tunnel from 9 p.m. to 5 a.m. tomorrow through Friday.

One lane of I-90 east in the Ted Williams Tunnel will close from 10 p.m. to 5 a.m. tomorrow through Friday.

Access from Frontage Road and Albany Street to I-90 east and Logan Airport will close from 11 p.m. to 5 a.m. Tuesday and Wednesday.

The Frontage Road north onramp to I-90 west at the Broadway Bridge intersection will close from 11 p.m. to 5 a.m. Thursday.

The existing four lanes on Washington Street and Harrison Avenue will be reduced to two lanes. The Harrison Avenue Bridge has been reconfigured to allow two-way traffic.

You can complain to us at starts@globe.com. The column can be found at boston.com/starts.