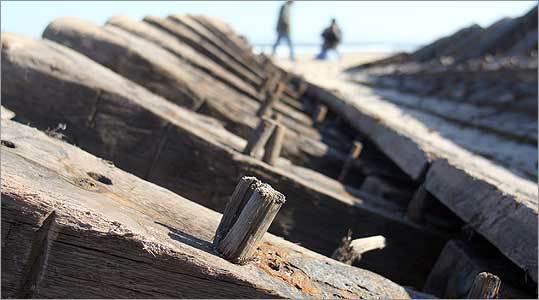 WELLFLEET - The 50 feet of hand-cut oak ribs had probably been swallowed by the sea more than a century ago, the remnants of a schooner lost with some 1,500 other ships that have sunk in the unpredictable waters off Cape Cod.

But a violent storm this week churned history up off the sandy, ocean floor, spitting the remains of the 19th-century shipwreck onto Newcomb Hollow Beach.

The timbers and planks, held together by wooden pegs, offer a glimpse of the golden age of the schooner, when hundreds of sails dotted the horizon here as ships transported lumber, granite, and coal. Poking up like the bones of a mighty whale, the wreckage has become a magnet pulling the curious onto the frigid beach, where frozen sand crunched underfoot.

"It's unbelievable," said Anneliese Barrio, 74, who brought her 4-year-old grandson, Jack, bundled in mittens and a knit wool cap. "The storm had to be wicked rough to bring this in."

The wreckage has set this sleepy beach town abuzz with speculation about the name of the vessel and the story behind its demise. Was it a majestic, three-mast schooner that sailed shortly after the Civil War? Or a worn, wooden barge, stripped of its masts, brimming with coal that sank in the late 1800s?

"We don't even know whether the crew was rescued from the ship," said Helen Purcell, the town historian who has lived in Wellfleet for nearly 50 years.

These questions will probably never be answered.

The National Park Service, which has jurisdiction over the schooner because it landed on the Cape Cod National Seashore, has examined, photographed, and mapped the wreckage.

Like the remains of most old ships that are blown ashore, the debris will now be left to the whims of the tide.

"It will probably either be buried by sand or get washed out again," said William Burke, a historian with the Cape Cod National Seashore who examined the remains. "Theoretically, it could be gone tomorrow."

The same storm Monday that pushed the schooner ashore sent a 9-foot rudder that had been embedded in the sand off Truro back to sea.

But even if the ship raises more questions than it answers, it helps foster interest in the region's maritime past.

"This is exciting for the people who live here now," Burke said. "It is kind of a chance to connect with shipping history. It's evocative."

Newcomb Hollow, empty most winter months, saw as much activity as it would on a balmy, summer day.

The lot was full, children peered at the wreck, and dogs scampered along the sand.

Les Greenberg heard about the find on his car radio and drove straight to Wellfleet.

"I'm really interested in this stuff," said Greenberg, a 57-year-old from Orleans who had his hands jammed in his jacket pockets.

He toyed with the idea of grabbing a souvenir, but thought better of it. "It looks like someone would scream," Greenberg said.

Jack Barrio, the 4-year-old who had come with his grandmother, did not have the same inhibitions. He grabbed an 18-inch piece of timber and handed it to his grandmother, who tucked it under her arm as the pair trudged back up the dune to their car.

Ranger Stephen Prokop met them in the parking lot and took back the souvenir, causing Jack to burst into tears.

"These artifacts represent history," Prokop explained later. "The wood peg and the timber here indicates that this is probably over 100 years old."

That is why Charles Frazier, a burly firefighter from Eastham, made the trip to see the wreckage. "I wanted to check it out before it was gone."