Suspect in rape at library was freed sex offender 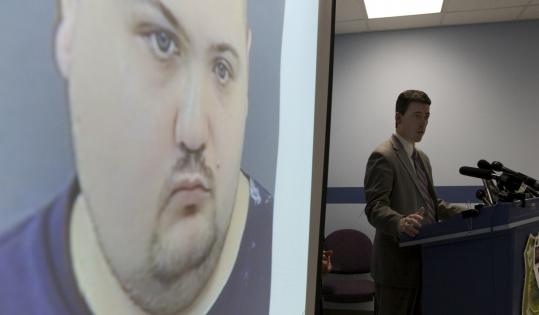 "I feel it was preventable," police Lieutenant Jeffrey P. Silva (right) said at a press conference on the arrest of Corey Saunders on charges of raping a boy in the New Bedford downtown library. (Rose Lincoln for the Boston Globe)
Email|Print| Text size – + By Maria Cramer and John R. Ellement Globe Staff / February 1, 2008

NEW BEDFORD - A convicted sex offender arrested this week on charges of raping a 6-year-old boy in the public library had been released from prison a year ago, despite the strenuous objections of the district attorney and three psychologists who argued that he posed a serious threat to children.

Superior Court Judge Richard Moses denied the prosecutor's motion to keep Corey Saunders in custody indefinitely, arguing that he had a low IQ and had suffered physical and sexual abuse as a child.

The judge said Saunders, who was sentenced to four years for the attempted rape of a 7-year-old boy in 1999, had not committed any major sexual offense while he was in prison. Moses released Saunders, ruling that he was not dangerous.

Later, Saunders was classified as a Level 3 sex offender, the most dangerous category considered likely to reoffend. Level 3 offenders are required to register with local police, and their photos are posted on a state website.

Police say that on Wednesday, Saunders, 26, raped the boy between the downtown library's tall book shelves on the second floor, just a few feet from the child's mother, who was working on a computer and was unaware of what was happening. At a press conference at police headquarters yesterday, police officials expressed outrage at Moses' decision to release Saunders.

"As a parent, I couldn't sleep last night," said Lieutenant Jeffrey P. Silva. "I have a little boy myself. I tossed and turned. It is a great human tragedy. What's more tragic is the fact that I feel it was preventable."

Saunders was arraigned yesterday in New Bedford Third District Court on charges of rape of a child by force, indecent assault and battery on a child under 14, and enticing a child. He was ordered held without bail at the Bristol House of Correction.

Moses, who was appointed in December 2002, during the waning days of Jane Swift's acting governorship, declined to comment through a spokeswoman who said Saunders's case is still pending.

Saunders lured the boy into a room full of reference books and magazines at about 5 p.m., police said. After the alleged assault, Saunders asked the child where he lived and threatened to come to his house and rape him again, police said. Terrified, the boy, who never screamed during the assault, gave his address, police said.

"He was paralyzed by fear," Silva said.

When Saunders and the boy left the bookshelves and entered an open area of the reference room, a librarian who had seen the boy earlier with his mother saw the pair and became suspicious. She found Saunders's photo on a website and rushed to tell the boy's mother, police said.

By then, Saunders had fled "like the coward he is," Silva said.

The librarian called 911, and police scoured the city looking for Saunders. They found him later that night on the steps of a homeless shelter.

Police praised staff members at the library, calling the librarian alert and describing the building as "a safe haven" that was monitored by video cameras.

"The issue here is whether Corey Saunders should have been allowed out in society and been at that library last night or anywhere where children are," said New Bedford's police chief, Ronald Teachman.

Silva said that two years ago a man tried to lure a youngster at the library away from the child's guardian, but the man fled and the child was not harmed.

Library director Stephen A. Fulchino said in an interview that 29 security cameras were installed after that incident. Yesterday, a newly installed computer that displays photos and information about local sex offenders was on the front desk.

"The staff did exactly the right things," he said.

He stressed that the alleged attack did not occur near the children's section, where "unattended adults are not allowed."

The children's room, which is located on the first floor and near the front desk, is staffed by a librarian.

"As soon as we have a problem with someone, we notify the police and take out a no-trespassing order," he said.

He shared a room with five other men on the third floor of the three-story building, which was built in 1787 and faces a cobblestone street lit by old-fashioned gaslights.

"This guy we knew nothing about," said Billy Stromme, a New Bedford fisherman who works as the night manager at the home.

Teachman said he believed Saunders violated his probation when he entered the library, where children often go.

In a telephone interview yesterday, former Bristol district attorney Paul F. Walsh Jr. said he considered Saunders to be one of the 10 most dangerous sex offenders he prosecuted during his 16 years in office.

Saunders led a troubled life, according to court papers.

His parents split up when he was young, after his father molested one of Saunders's two sisters.

When he was 9 years old, the Department of Social Services accused his mother of neglect after she left him home alone and told the child "she didn't want him anymore," Moses wrote in his December 2006 ruling.

In 1994, he was found wandering the streets holding a teddy bear. He had been missing for 14 hours, and his mother signed over care to DSS. Saunders was sent to the psychiatric ward of Cape Cod Hospital, where doctors said he had low intelligence and showed signs of developmental disability, the judge wrote.

For years, he was in and out of schools and residential facilities for children with special needs and often exhibited disturbing behavior, having fantasies about children. In 1999, he was placed in a foster home with a 7-year-old boy, whom he molested shortly after he arrived there.

Just weeks before his 19th birthday in 2001, Saunders pleaded guilty to attempted rape of a child and indecent assault and battery on a child. He was supposed to be released from prison in 2003, but another superior court judge found he should be held temporarily at the Massachusetts Treatment Center in Bridgewater.

His case came up again in 2006. Despite the testimony of several specialists, Moses concluded that prosecutors did not prove beyond a reasonable doubt that Saunders was sexually dangerous or that he should be civilly committed for one day to life at the Bridgewater center.

Near the end of his ruling, Moses wrote, "Saunders will be required to register as a sex offender, and the public will be provided with the protections afforded by such statute."

Emily Sweeney of the Globe staff contributed to this report.