Eyes on the skies 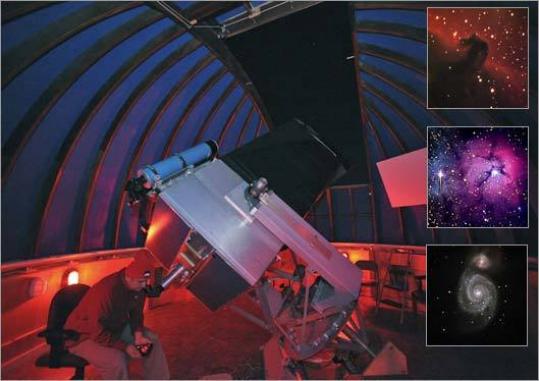 The Horsehead nebula (top right), about 1,500 light-years away; a star-forming region in Sagittarius (middle right); and a galaxy in Canes Venatici are some of the images captured on film through the telescope of Mario Motta in the dome of his Gloucester home. (Lisa Poole / Boston Globe; Inset: Mario Motta)
Email|Print| Text size – + By Taryn Plumb Globe Correspondent / January 31, 2008

The room is deep red, shadowy, and chilled like a walk-in freezer.

A rectangular hole in the ceiling above reveals a cue-ball-white half-moon and glittering stars: Cassiopeia, in its wispy, flatted "W;" the trio of bright blue orbs on Orion's belt; and the dull, tiny cluster of the Pleiades.

Outside, snow is mounded stiff like styrofoam; the encrusted land is silent except for an occasional lonely howl from a dog.

It's here, in this observatory high on a Gloucester hill traced with steep, narrow, ice-slick streets, that Dr. Mario Motta trolls the boundless and magnificent expanse above.

"I'll spend many a night going from galaxy to galaxy," he said. "There are so many to see."

The 55-year-old father of three grown children isn't a professional astronomer - his trade is cardiology - but "amateur" doesn't quite describe him, either. The longtime stargazer has built one of the largest homemade telescopes in the country, which he uses to probe the abyss of space and photograph and research various stellar and galactic phenomena.

At 11 feet long and 1,400 pounds, the device sits pointing toward the sky in a covered dome - also hand-built - atop Motta's three-story, gray-clapboard house in Gloucester.

Getting up to it requires a short walk though a narrow, half-circle-shaped "control room" filled with framed photos of colorful galaxies and astronomer Clyde Tombaugh (who discovered the on-again, off-again planet Pluto) and bookcases stacked with various volumes - naturally sci-fi, with a healthy supply of Arthur C. Clarke and Isaac Asimov.

Then, there's a creaky doorway, a hunched step along a low-ceilinged breezeway - which serves as a barrier to keep heat from rising into the dome - and a trudge up eight wooden steps through a trapdoor.

At the top of the stairs, the telescope looms, an enormous, rectangular contraption positioned on a U-shaped base at a 45-degree angle and covered with a black shroud.

Although it takes up much of the 20-foot diameter, 360-degree rotating dome, there are a few feet of circumference for Motta and guests to walk; sometimes, they might brush up against the blue walls, whose pale support beams stick out like giant ribs. Otherwise, the round room is sparse, except for an assemblage of computer equipment on a metal desk in one curved nook.

Whenever the sky is coal-black, empty of the moon and cluttered with stars gleaming like tiny halogen lamps, Motta tries to be up in the observatory.

Often, he invites friends and other local astronomers in for star parties. "Life is all about sharing," he said.

But on many other clear nights, he might spend hours solitarily scanning the cosmos. "If it's a good night, why not?" he said with a shrug as he stood in the dome, hands curled in his pockets and a red wool hat bunched up on his head.

Much of that time he spends taking photos. But it's definitely not a point-and-shoot experience: It can take a half-hour to several hours to take a picture, depending on how far away the object is and whether he's shooting in color. During that time, the dome is either dark or glows red with photo processing lights. "It's just like the 18th century," quipped Motta, who spends his earthly hours as a cardiologist with North Shore Cardiovascular Associates at Salem Hospital.

Still, in those labored hours, he has captured amazing images - young stars and old stars, some blazing, some faint; light that's taken millions of years to reach our eyes. Dozens of galaxies - classic spirals in hazy yellow and purple with two swirling tails; rings with empty centers; inverted S-shapes. Comet Hale-Bopp - made famous by the Heaven's Gate cult, whose 38 members committed mass suicide at its arrival - with its blinding center and splitting tails in blue and white.

The farthest galaxy he photographed is 10.2 billion light-years away. In the picture, it's a tiny, dusty speck surrounded by hundreds of other white blobs. "There's almost nowhere you can point a telescope and not see faint galaxies in the distance," he noted as he peeked over his spectacles at a laptop screen.

Besides taking photos, he spends ample time on research: His scope has earned him a reputation, and professional astronomers constantly enlist his services. He's kept track of variable stars, whose luminescence constantly oscillates; black hole eruptions, which occur when the vacuous entities eject sprays of debris after swallowing whole suns; and gamma ray bursts, which are brilliant, phosphorescent rays that occur when a star explodes.

He even set a beeper to go off for the latter phenomenon. "My wife loves it when that happens at 3 a.m.," Motta said with a chuckle from a seat on a tan couch in the warmth of his kitchen. Seated nearby, Joyce Motta seemed unfazed. "It's his passion," she said with a shrug.

It has been for quite some time. At 14, Motta crafted his first scope, an 8-inch mirror lens that he still keeps as a memento. "I've been building them bigger ever since."

Over the years, those creations have included at least eight regular-size telescopes and two stand-alone domes. A few years ago, when he decided to build his current observatory, he made his priorities clear: It was to be erected first, then the house around it.

With help from friends, he constructed and put up the dome's curved walls. The scope, meanwhile, took four years to complete, between planning and designing by fellow amateur Scott Milligan, engineering, and building. It's largely composed of scraps, including carbon fiber and fiberglass; Motta personally modified 584 of its components.

All told, he invested roughly $30,000 in the device and its surrounding dome. Doing it manually saved him hundreds of thousands of dollars, he said, as a manufacturer might charge anywhere between $250,000 and $750,000 to make such a device. Because it was handmade and he was able to custom-design everything, the apparatus rivals most other amateur scopes and even some professional scopes at the university level. That's mostly due to its size and optics.

Its main mirror is 32 inches in diameter, and light travels through four correcting lenses, thus minimizing the loss of optics to one-half of 1 percent. It's also computer controlled - with just a click, it aligns itself to a point in space.

The setup is quite impressive, said Virginia Renehan, president of the Amateur Telescope Makers of Boston, of which Motta is a member.

In fact, many so-called novices have crafted scopes that outpace professional designs, she said, and they're constantly documenting space and its endless entities. "Amateurs really contribute to science."

Being one herself, she said she is captivated by the mind-boggling scope of the universe.

"It's hard to comprehend, to wrap your mind around," she said.

Motta is similarly intrigued by the brewing, violent, and vast nature of space.

And, sort of like a celestial object himself, his life orbits around the cosmos.

For instance, in an effort to keep the horizons dark for Cape Ann astronomers, he helped pass a law in Gloucester that bans outside lights pointing up or sideways.

Similarly, he plans most of his vacations around solar eclipses: He's witnessed them, through a 6-inch portable telescope, in Aruba, Bolivia, Egypt, Hungary, and Mexico. Next year, he'll squint his eyes in China to watch the moon once more momentarily blot out the sun.

"I jokingly call this my vacation planner," he said as he held up NASA's "Fifty Year Canon of Solar Eclipses," a 300-page paperback with edges curled from wear. "It ends in my 80s, so I probably won't be getting the next edition."

Even so, he'll always turn his eyes and thoughts skyward. "I'm impressed by the grandeur of space. It's awe-inspiring."