Parade for Pats is issue in vote

Victory rally may be Super Tuesday 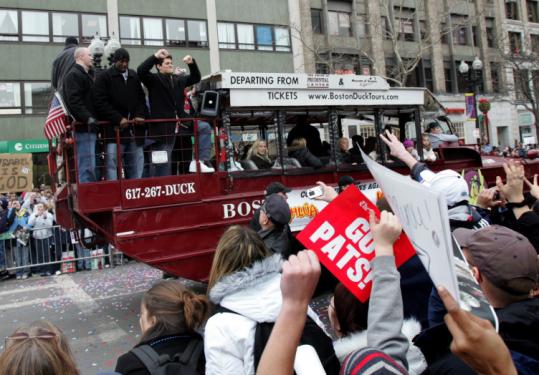 A Super Bowl win for the New England Patriots on Sunday would set up a big-league conflict between politics and sports in a city that is obsessed with both: The victory parade would have to be on Super Tuesday, when Massachusetts votes with 21 other states in critical Democratic and Republican presidential primaries.

Mayor Thomas M. Menino said yesterday that there is no choice. The players would not be able to get back from Phoenix early enough for a Monday parade. And a number of Patriots have to travel to Hawaii Wednesday for the Feb. 10 Pro Bowl.

City officials have been planning a route that would skirt polling places and are putting extra police officers on call. More than 200 officers are needed to guard ballots each election day. Hundreds more are typically needed to control massive crowds during victory rallies.

Logistical nightmares aside, the notion of Super-super Tuesday had some voting advocacy groups yesterday contemplating how the presidential candidates will fare in a head-to-head matchup against what could be the best team in football history.

"The Pats have been able to take down everyone else, but can they knock down Hillary Clinton or Barack Obama?" wondered Avi Green, executive director of MassVOTE, a nonpartisan voting rights group. "Can they handle the Mitt-mentum?"

Menino said he does not want to jinx the Patriots by talking about a celebration before it is warranted, but he said a victory parade would probably start on Dartmouth Street near Columbus Avenue in the South End. The now customary caravan of Duck boats would carry the New England sports stars to Boylston Street, where the boats would turn right and head to Tremont Street and City Hall Plaza on Cambridge Street.

"We have to have a plan," the mayor said. "I'm just thinking about it; I don't want to jinx anybody."

The idea of hundreds of thousands of football fans in Boston tying up traffic and possibly depressing voter turnout and diminishing the Massachusetts election impact ruffled feathers among some Bay State elections officials yesterday.

Secretary of State William F. Galvin, who is responsible for overseeing elections statewide, said he is counting on Boston city officials to make sure voters have unfettered access to major polling places at City Hall, the State House, and Copley Square, which would be swarming with exuberant Patriot fans during a parade.

"With all due respect to the New England Patriots - and I wish them well; I hope they win - holding the election of the next president of the United States is a little more important," said Galvin, who has been overseeing the Boston Election Department since dozens of precincts ran out of ballots in November 2006.

By yesterday, Galvin said his office had not been contacted by the city to coordinate the logistics of potentially holding a major election and celebratory parade on the same day.

"We will definitely be having an election Tuesday, whether the Patriots win or not, whether we have a parade or not," he said.

The Patriots are scheduled to face off against the New York Giants for the Super Bowl title Sunday. Kick off is scheduled at 6:17 p.m. Eastern standard time. The team has told city officials the players would not be able to make it back to Boston in time for a parade the next day.

"You can't have a parade without the players," Menino said.

So, Tuesday it will be. City officials say they have everything under control. Boston police officials have already asked the State Police for help with crowd control, just in case. State law requires that a Boston police officer be present at each of the city's 254 voting precincts from the opening of the polls at 7 a.m. until close at 8 p.m.

"The first priority is staffing the polling places," Menino said.

"Being out and being in a crowd with people talking about the election and voting may in fact help spread the word," Patterson said. "People have got to talk about something other than the Patriots while they're out there freezing."

"It's been a pretty good year for turnout. There's no reason to think . . . that Massachusetts would be an exception to the general tendency," Patterson said. "One thing that does contribute to higher voter turnout is voter contact and a feeling of community. Now, if they lose and the dark cloud settles over the metropolis, then we'll see."